Last week, UN Secretary General Ban Ki-moon had invited leaders from government, finance, business and civil society to bring bold announcements and actions on climate change to the summit in New York. 300,000+ people marched on the streets of New York, accompanied by additional marches in 161 countries.

I was invited to 2 adjacent events from our partners CDP and PwC in New York. CDP’s announcement cut straight to the chase. Their new report claims to have some of the first proven evidence of a link between business leadership on climate change and a company’s profitability. The study shows that S&P 500 companies that build sustainability into their core strategies are outperforming those that fail to show leadership. ‘…Corporations that are actively managing and planning for climate change secure an 18% higher return on investment (ROI) than companies that aren’t – and 67% higher than companies who refuse to disclose their emissions’. One could hope that the study puts the long-debated question of whether sustainability undermines or improves financial results finally to rest. 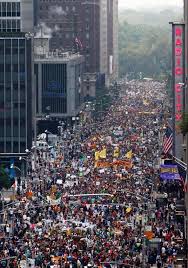 Here some other highlights: Unfortunately the big powerhouses were a bit vague on commitments. Examples:

Jerry Greenfield, co-founder of Ben & Jerry’s, summed up the happenings saying ‘….riding back on the bus to Vermont, as tired as my feet are, I know one thing for certain. This was not just the end of a long day, but the beginning of a real movement….’

Lets hope he is right.