To date, more than three thousand users are subscribed to the SAP Mobile Platform cloud version trial account over the last 12+ months. Many developers are attracted to the simplicity of a cloud based mobile platform to securely connect to on-premise back-end business systems and leverage a reliable push abstraction layer for their mobile business apps.

With the release of the SAP HANA Cloud Platform mobile services, SAP is further consolidating mobile technology and making it available as a Service.

SAP HANA Cloud Platform mobile services (HCPms) will replace the well-known SAP Mobile Platform, enterprise edition, cloud version (commonly referred to as SMP Cloud) as SAP’s Platform as a Service (MaaS) offering. At first glance this sounds like a rebranding, but in fact this release is much more than that.

The new name really makes more sense. First it clearly states that our product is running on top of the SAP HANA Cloud Platform, SAPs in-memory, feature-rich and easy-to-use development environment in the cloud. Secondly the name tells us that the mobile services are on par with other services like database, security, integration or app services. This is an important distinction as over the last year, I’ve had many discussions with people who thought that SMP Cloud was just an SMP 3.0 installed on virtual machines somewhere in the cloud. HCPms is a real Mobile-as-a-Service offering therefore you don’t have to worry about upgrades, backup, patching, scalability and so forth. SAP will take care of that.

Given that SMP 3.0 and HCPms are not the same offering – a logical question is “What do the two have in common?”. In developing HCPms, we have merged the two source-code baselines so that the bulk of the code is common between the two products and therefore expose the same behavior. A key benefit of this approach is that it allows us to develop features, deploy it to HCPms and you can benefit from it and with the next update of SMP 3.0 on-premise customers will have the same feature available as well. All this glued together with a single mobile SDK means that an app written for HCPms can also run against SMP 3.0 – no code change required.

There are a few differences behind the scenes, such as HCPms’ use of SAP HANA Cloud Integration services instead of Integration Gateway and the use of HANA Cloud Platform security infrastructure.

I hope this sounds good to you and I have more great new features to share for HCPms so read on!

HCPms supports the full set of Apache Cordova Plugins that we ship with our Mobile SDK SP05. From AppUpdate (allowing content updates in Cordova project at runtime, controlled by the server) to Offline Plugin, which allows to run full offline OData applications in a hybrid manner. 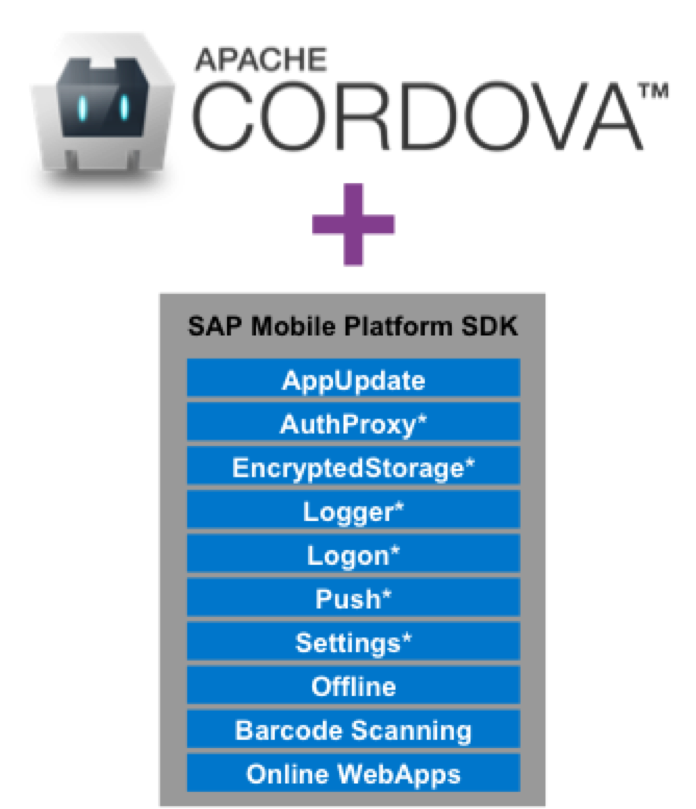 With SDK SP05 we shipped the first set of plugins for Windows 8.1 – all compatible with HCPms. If you want to read more about the new features of the SDK, you can do it here SAP Mobile SDK SP05 – What is new ?

One of the most anticipated features this year is definitely the Offline OData Service. This combination of easy to use API and a feature-rich, proven sync technology allows developer to create offline mobile Apps without having a PhD in “Offline Technology“. Developers are now able to create sophisticated offline applications the same way they would develop online applications – there is no development paradigm chance. If you want to find out more check the maybe you want to check this Getting Started with Kapsel – Part 15 — Offline OData (New in SP05).

The new enhanced Push API allows back-end systems to publish business events to HCPms with ease and flexibility. The back-end just needs to know, which user and what app needs to be notified with what kind of message. This eliminates the need for the back-end to know anything about the device.

In addition to that the new API enables bulk push messages. All in all, this is what you need for your notification scenarios – regardless of target device: we support notification for Android, Apple, Blackberry and Windows.

The picture below is an example for the Push API. Given information is: a message to be shown on the device, a target application and a list of users to be notified. This information will be send to the Push API resulting in three notifications: two for User A (she owns two devices) and one for User B. The other users will not receive a notification since they are not in the recipients list and do not have the app.

A picture is worth a thousand words: 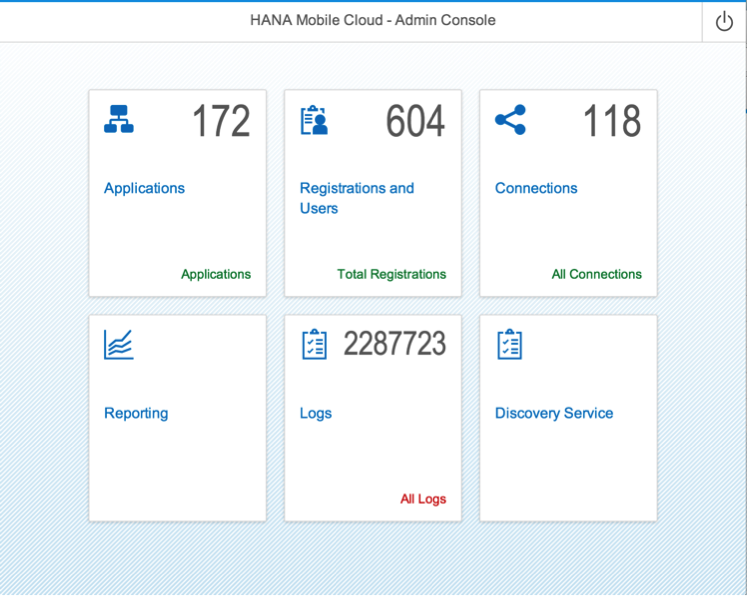 The new fresh design is responsive and can be accessed via phones or tables and of course from you laptop in your office. If the appearance of the Admin UI reminds you of SAP Fiori, there’s a good reason for that. The new Admin UI was built using the same open source UI5 framework as SAP Fiori. Needless to say that it’s easy to use and probably you’ll never visit the documentation we put together to explain you all the details.

There is more to tell about the new features in this release, but I doubt that you would have the time to read through every aspect of HCPms – it would fill a book on it’s own. Nevertheless, I hope I have raised your curiosity and share my excitement about this new release.

In closing, I would like to share one more thing with you: HCPms supports full-cloud scenarios, where the back-end is already available in the cloud as well as hybrid-cloud scenarios where the back-end is located on premise. The latter is made possible by the SAP HANA Cloud Connector, which establishes a secure connection and allows whitelisting of resources to be accessed by HCPms. I think the following picture explains it better than a description.

I hope that you now have a good understanding of what SAP HANA Cloud Platform mobile services is all about and are starting to think of how you would utilize it. We are working hard on providing a trial infrastructure as soon as possible, and expect to have it online in the first quarter of 2015.

Stay tuned and have fun!

For the ones who want to learn more I have some links:

A great innovation and predominant raise in ROI.

Is there also simplicity in the license model? Just like with SAP Mobile Secure? Will it be included? Or something like €1,- per device per month?

Yes indeed!! The pricing is simple.

You pay for a user per month. This user can run as many apps based on HCPms as he wants. In addition, he can do so, on as many devices as he owns.

There is slightly more to pricing, but basically this is it.

And sorry, it's not included in Mobile Secure.

Thank you and thanks to SAP for keeping the pricing model simple. That will boost adoption at customers.

Is there any planned webinar on this topic soon ?

yes there are - because most of the topics discussed hereSMP 3.0 Enablement - Events are valid for HCPms too - as I said, we share the same SDK, so all the OData-Offline works exactly the same in SMP and HCPms.

Is this service available in HANA Cloud trial developer account as well ? I'm not able to find the same. Can you please clarify.Thanks.

Currently not. We are working hard to provide you a trial access early next year.

Thanks Martin for the information.

What about the SMS services which are available in SMP3.0?

Is it already part of HCP mobile services?

I'm sorry, but those are not part of HCPms.

In HCPms help document, it is said that we can delegate Basic Authentication to Local Identity Providers (IdPs) with enabled SCIM(Simple Cloud Identity Management). Please refer to https://help.hana.ondemand.com/hana_cloud_platform_mobile_services/frameset.htm?c8be0d092c4b420b9fd38df77a9f69ef.html

And with the new feature of SCC(SAP Cloud Connector) 2.5, we can configure cloud applications to use on-premise user provider and to consume users from LDAP via the Cloud connector. https://help.hana.ondemand.com/help/frameset.htm?933034aeb00d489eaf21d50bbb12fed5.html.

So, could you please let me know whether it is a feasible solution that our mobile application (deployed in HCPms) use our local LDAP server via SCC for user authentication and authorisation? And, do you have some references or examples about this solution?

Thanks for your support.

And, it seems that we cannot enable SCIM in a trial account. 🙁

Does HCPMS suppport thirt party backend like oracle, my SQL.

does it uses integration gateway ?.

we assume that OData is already available - hence IGW is not present in HCPms.

There are many options to provide conversion capabilities on HCP or in an on-premise fashion.

This whole topic could probably span a whole blog post.

Excellent and Most Required Movement on Mobility Front...Thanks

I'm wondering about the Agentry functionality of SMP - is it available in HCPms or still only on the onpremises SMP3.0 ?

For example the SAP LOB apps like Rounds Manage and Work Manager - can they run on HCPms ?

Agentry apps are not supported on HCPms.

Thanks for that reply Midhun... Is there going to be Agentry support in the not too distant future... Otherwise if you want a SAP LOB mobile app, you can forget about ever using services like HCPms as you would already have to have the thing locally installed.

(better still - get rid of the agentry requirement of the LOB apps. build your apps with fiori and SMP's offline odata.)

Martin could answer that question better.

Jason. Please refer to the latest roadmaps publised in service.sap.com in relation to support for Agentry based apps on HCP. it is a future direction.

Regarding your second question oData has limitations in the offline scenario. Refer to help.sap.com (for example function imports are a limitation for offline for oData 2.0)

SAP Logon/SAP Identity - are few that came up in my research. Would be great to be educated more

MOST REQUIRED... Yes We Can

S4HANA for ERP as complete solution with Predective analysis helps in Strategy formulation, future shape etc. now YES SAP Mobility will be the need, most required & demanded interface for the most complex and challenging businesses to overcome the pain areas across the technolgy or business landscape. Thanks

thanks for the such valuable information,

if i want to migrate HCPMS app into SMP 3.0. how much efforts are there can i export and import the app as it is.

this depends on the type of application you want to "port".

First, Mobiliser, Agentry and SMS-based Applications are not supported on HCPms.

Second, depending on the architecture you'll probably need to install the Cloud Connector as well.

Then, you'll need to connect the Cloud Connector to your new HCP account.

Depending on the landscape setup it could take you a day until you have your first setup in a dev landscape. For production it could be very different, though.

Security configuration probably would consume the most time, since you need to be aware that you have another security stack now, which will influence your system setup. Make yourself a clear plan on how authentication is done in SMP and how it should work in HCP(ms). Then execute on that plan.

In fact I recommend to to the migration manually - there are not many steps to do and since you'll use the cloud connector and have a new Security setup it is important to do the steps manually to understand what you are doing. Learning by doing, so to say.

I think Saurabh is looking to go the other way, from HCPms to SMP 3.0.

Well, then it's the same, just the other way around 😉

Uninstall Cloud Connector, but make sure you'll configure a reverser proxy to your needs.

Also make sure you have a plan for your security.