Note: All Visualizations in this post can be found in our Lumira Cloud in interactive form – Enjoy!!!

To start a definition:

As you can tell if you have seen any of my other DataViz posts in the House Of Titans I am finding the noble quest of Visualization quite amusing and spending way too much free time keeping the Data Walkers at bay.  Luckily I had some good travel time yesterday coming back from SABOUC in Dallas, Texas.

I have decided from a goal standpoint that I would like to put together a visualization in each of our fine Houses – this seems like a fun activity and a good way to learn more about the tool and expand my social consciousness. There is more to this world beyond the US sports scene even though I often do not want to acknowledge that fact.  We will see how far I get but consider this the next installment!!!

For this analysis we will be representing the House of Spirits and doing a deep dive on Earthquakes. In terms of magnitude and impact to humanity, life, and cost the Earthquake has the single biggest impact on us outside of a full extinction level event.  I was able to obtain data from Northern California Earthquake Data Center and put together a history of worldwide Earthquakes since 2002.

For our purposes we will focus on Magnitude 6+ earthquakes on the Richter Scale which are those that are most likely to cause impact to people, buildings, and disrupt our lives to a significant degree. To begin with I wanted to look at just the overall numbers and locations of these Magnitude 6+ earthquakes and then dig deeper into the specific country impacts and look at those geographies most likely to be affected.

Since 2002 there have been a total of 2,089 magnitude 6+ earthquakes that have been registered across the Globe.  To get a first look at this we have a Line / Column chart by year showing the number of Earthquakes and total sums of Magnitude during each of those years since 2002.  2011 and 2007 look like particularly busy years.

For our next DataViz we used a Geo Choropeth Chart to look at the distinct number and location of these major earthquakes across the Globe.  As we can see from our chart we have some broad impacts across the globe but significant clusters from Alaska down the US west coast all the way through South America in the Western Hemisphere.  In the Eastern Hemisphere we have a cluster running along Indonesia, Japan, and the Aleutians.

In terms of overall impact for Earthquakes we can’t look specifically at just the number of them but look as well at the Magnitude of the Earthquakes affecting a particular region. So to get a bit of a better look at that aspect I put together a Geo Bubble Chart by Region looking at the Total sum Magnitude of impacts to a particular Region across all the earthquakes that hit since 2002.  To make this a bit more interesting and visual I also added in the animation by Year. This doesn’t show up so good as a Jpeg but if you review the DataViz in the Lumira Cloud it will make for a fun little show!

For our next segment we will look a bit closer at Country specific impacts to Earthquakes and focus on some of the interesting findings in terms of where Earthquakes hit and the countries most affected by them.  The impact of an earthquake is generally a factor of not only its Magnitude but the location where it strikes.  If you look at the United States to start an Earthquake will have a far more significant impact if it strikes a major city like Los Angeles or San Francisco in California where we have millions of inhabitants as compared to hitting in Milton, Alaska where we have 1,500 or so inhabitants.

To look at this a bit more clear we have a Geo Chorlopeth of Total Magnitudes by Country to see some of the hot spots at a country level across the Globe.  Clearly at first glance if we are Seismophobes we would not want to move to Indonesia where we have had 51 Earthquakes register at 6+ since 2002.  Yes – that is over 4 such events per year!!! Can you imagine that kind of disruption on an almost quarterly basis? Even if they weren’t the Super Majors causing loss of life the constant churn and shaking has got to get old after awhile.

To slice this data in another manner with an equally cool visualization we have a Tree Map broken down with Total sum of Magnitudes and Number of Earthquakes by Country.   Indonesia as expected shows up on the top!  A couple surprises here that we couldn’t see well on our Geo Choropeth is that Chile and Papua New Guinea come in 2nd and 3rd respectively in terms number of earthquakes.  Expect that they are such small countries in terms of overall land size we would need to drill in at a Regional level to see them a bit clearer in terms of a break out.

For our next level of analysis I wanted to look at the worst years since 2002 in terms of the number of earthquakes and impacts.  For that we have a radar chart with Total sums of Magnitude by Country and year. This isn’t exactly scientific as for each magnitude up of an earthquake it is 1000 times more powerful but at least this will give us an idea of who got hit the most consistently during a given time period. 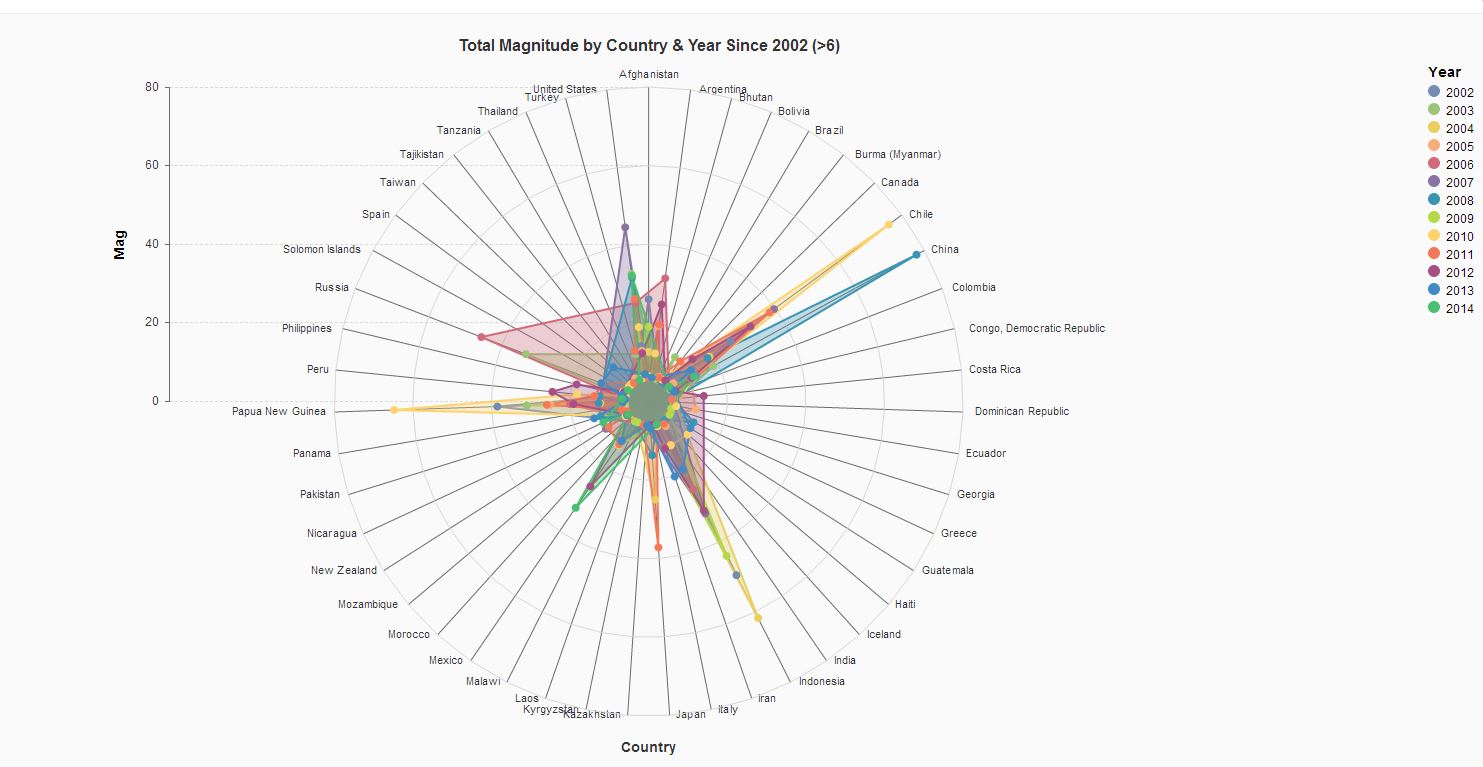 China 2008, Chile 2010, and Indonesia 2004 are the most impactful Earthquake years based on our high level analysis and the signature quakes from those years were as follows:

Earthquakes have the possibility to effect everyone in the world but given the current tectonic plate structure it is clear that the probability and impacts while global are highly concentrated on the edge of Eastern Indonesia and Western Americas.  Just interesting when you see it put into focus there are definitely some areas of the world that we may want to consider avoiding if we suffer from Seismophia in any capacity.  From the looks of things it appears Australia may be a safe place to go!!!

Not bad Voz ... does the heat map sort itself automatically or did you have to apply a descending sort to get it oriented as such?