This year’s London Fashion Week (LFW) showed that designers have truly embraced the digital age, with iconic brands such as Burberry Prorsum and TopShop streaming their shows online –  allowing shoppers around the world to view some of the clothing styles we will see in Spring/Summer 2015 (SS15).

As we shall see, technology directly influenced the response LFW designers had over the event from social media – SAP examined analytics closely to discover which brand names and designers came out on top in terms of popularity and positive buzz.

It can be very useful to look at what brands and designers people on social media are talking about, particularly when comparing them to what fashion bloggers and insiders may think is ‘in’. Retailers need to pay attention to both, because each will be a factor in what is hanging up on clothing racks next year.

Burberry Prorsum’s SS15 (Spring/Summer 2015) collection saw it come up number one in general social chatter, eagerly anticipated and supported with the attendance of celebrities like super models Kate Moss and Cara Delevingne. In second place behind came Julien MacDonald, thanks in no small degree to the presentation of a diamond-embroidered wedding dress costing more than £4 million at his show.

But MacDonald didn’t show up as a top insider pick, which may have been due to the clothes being high-end couture. In terms of critical attention, Northern Irish designer JW Anderson was the favourite, perhaps due to the more ready to wear nature of his designs – although his show did present some very original hat pieces!

Classic American designer Tom Ford came up high in both critical and social attention, as well as sentiment, thanks to a sexually charged yet classic collection of clothes. His show also attracted an A-list celebrity presence including movie star Bradley Cooper and Anna Wintour, powerful fashion figurehead in charge of Vogue USA. 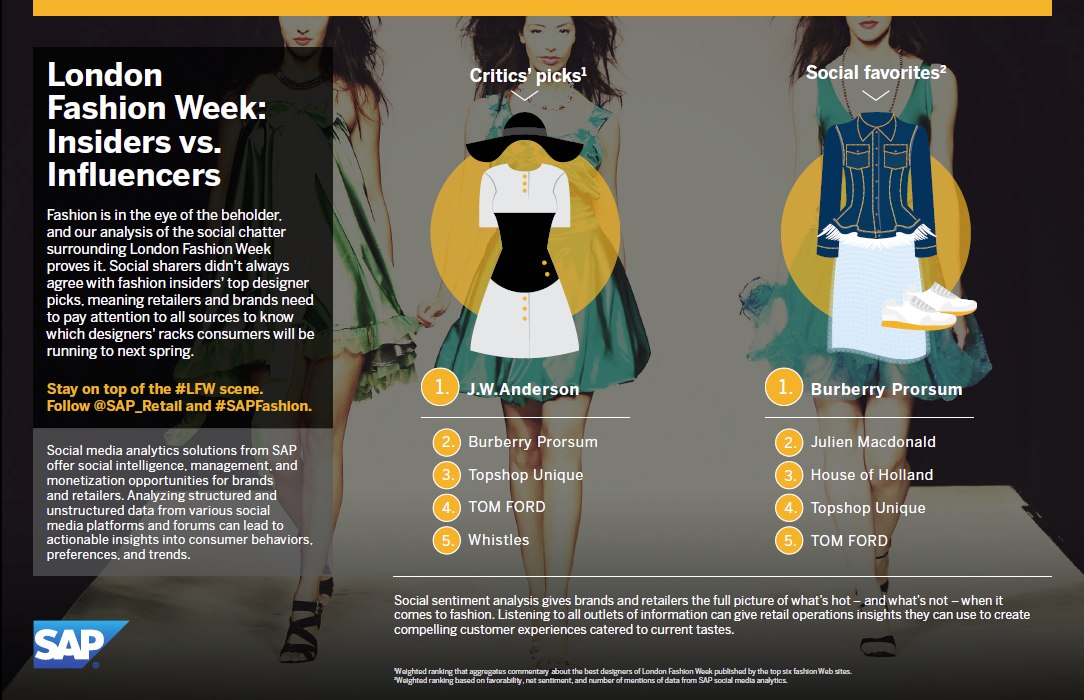 Social media chatter was heavy on metallic and pinkish colours. However, fashion critics thought that brown and yellow would be top colours in 2015. Other colours worthy of mention were green, nudes, browns, reds and oranges, which all attracted similar levels of positive sentiment.

However, it may not be a wise move to start looking at buying clothes in purple and burgundy – it attracted the most negative sentiment out of the colours we examined. Colour analysis is particularly useful to retailers – getting this wrong could mean the difference between success and failure for certain clothing lines.

Analysis of Twitter handles and hashtags provided a clear view of what had been trending and what was worthy of social chatter at LFW. Interestingly, the official @LondonFashionWk handle was only second in terms of mentions, with @Burberry coming in at number one.

Burberry Prorsum was also the most talked-about designer – its social success is likely due to its willingness to put technology at the forefront. The brand hosted a popular LFW live streaming and even tested a Buy Now button on Twitter, where users were allowed to purchase items straight from tweets.

@TopShop Unique was also one of the top Twitter handles, with TopShop Unique attracting major social buzz and positive sentiment, again partly because of anticipation. (Model-of-the-moment Cara Delevingne was there again – opening the show, and the wide mention of her handle @caradelevingne reflects her massive influence). TopShop Unique also streamed its SS15 collection catwalk show directly into stores to showcase it to new shoppers.

The social media success of Burberry Prorsum and TopShop Unique shows a direct correlation between their focus on technology and the amount of social chatter they receive. Retailers and brands will be looking at this very carefully – those that understand this can win in a very competitive industry.

Again it was Burberry Prorsum and TopShop Unique which were the big winners here, although Whistles carried off a show which got people talking positively. This shows the value of hype – chat at LFW 2014 actually began a week or so beforehand, and the companies that delivered high spikes in social buzz during their collections reaped the rewards of fashion fans expecting spectacular shows. 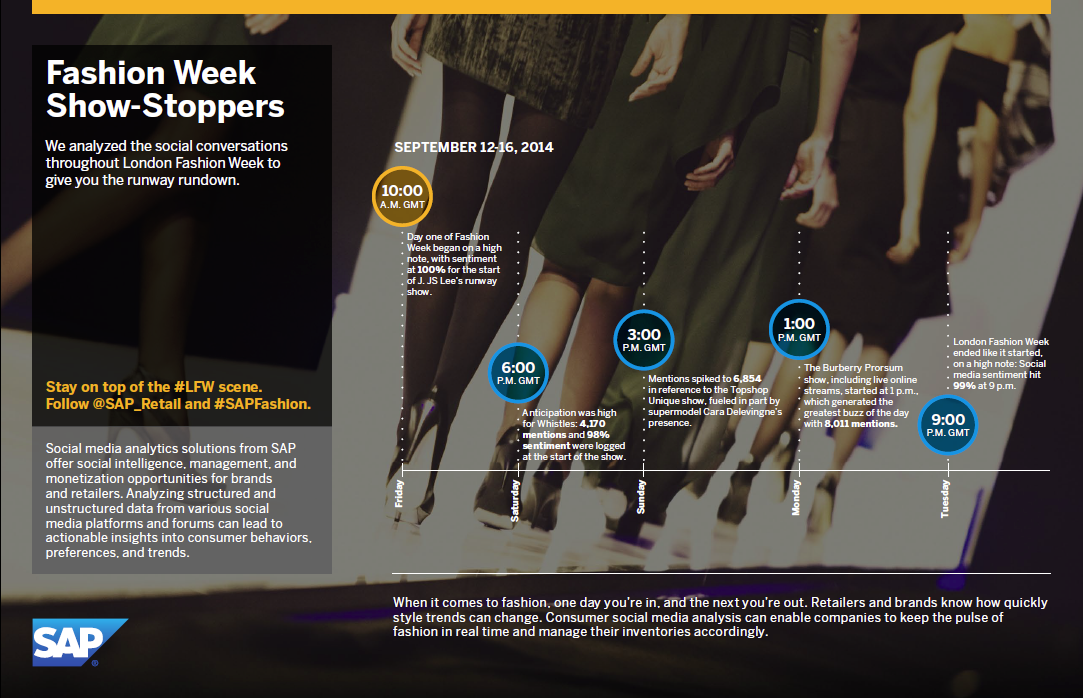 Who Are You Wearing?

A name not so well-known outside of fashion circles in the House of Holland drove a lot of celebrity-driven chat – it came top, ahead of Burberry Prorsum and Julien Macdonald.

This can partly be explained by the hip London fashionista nature of Henry Holland and the British celebrities his show attracted, such as singer Rita Ora and others members of the fashion pack including Alexa Chung, Pixie Geldof and Daisy Lowe. (Harry Styles of One Direction turned up at Holland’s show a year previously).

It’s also worth mentioning actor and model Jamie Bower, who is dating model Matilda Lowther and was a character in the Twilight Saga. He turned up at both the Burberry Prorsum and TopShop Unique shows, and the power of celebrity is reflected by the fact he had the third most popular Twitter handle over LFW in terms of mentions, beaten only by @Burberry and @LondonFashionWk. 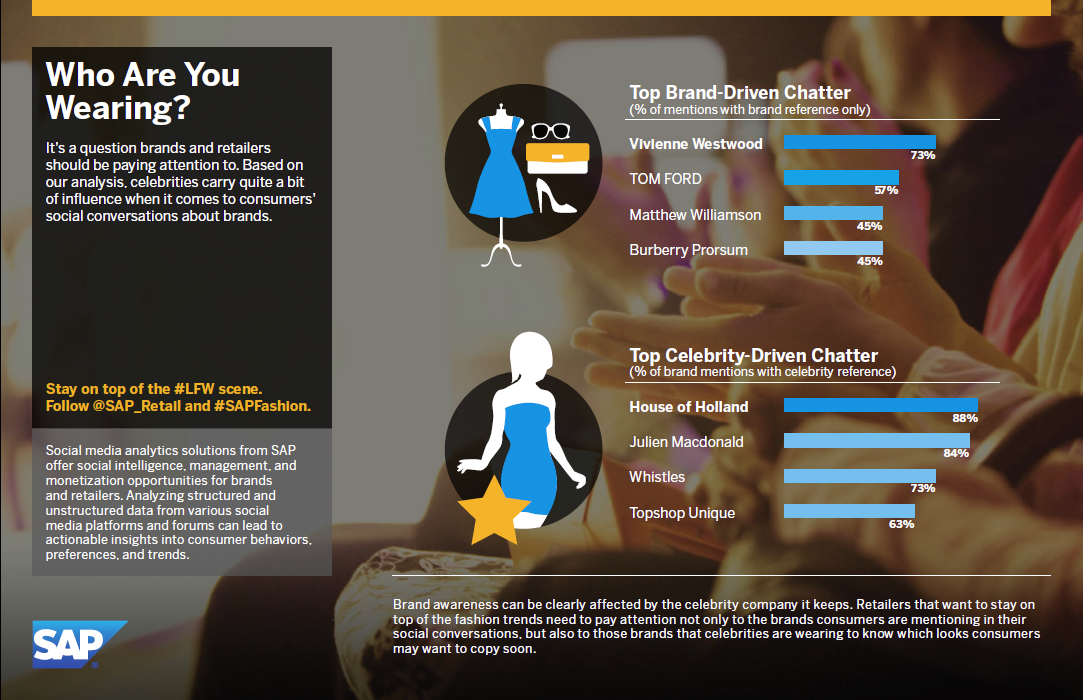 What will you be wearing?

The fashions you will see in the High Street next year are dictated by the clothes you see on the catwalk, particularly from designers more focused on ready-to-wear clothing.  Social analysis provided by SAP gives brands and retailers the full picture of what’s hot and what’s not when it comes to fashion.  Retailers can use this information to understand and decide what lines they should be putting on sale to meet the high expectations of their customer base.

Make sure to stay tuned with Milan and Paris on our Fashion Week infographic landing page.