Here I am submitting my entry for Data Geek Challenge III – Thrones of Data in House of Healers category. In 2014, world has faced unknown disease outbreak  in many countries specifically in Western Africa. My entry is not only to analyze the statistical data but also to show how this disease has expanded drastically with number of death cases. Ebola is quite lethal but not particularly contagious, so it presumably wouldn’t cause an epidemic in countries with modern health systems. This entire tragedy is a failure of humanity. Through this entry I just want to put my efforts to let inform others about Ebola and the situation of the suspected countries so that we can help them to get out of this.

Ebola viruses are found in several African countries. Ebola was first discovered in 1976 near the Ebola River in what is now the Democratic Republic of the Congo. Since then, outbreaks have appeared sporadically in Africa. The natural reservoir host of Ebola virus remains unknown. However, on the basis of evidence and the nature of similar viruses, researchers believe that the virus is animal-borne and that bats are the most likely reservoir. Four of the five virus strains occur in an animal host native to Africa. 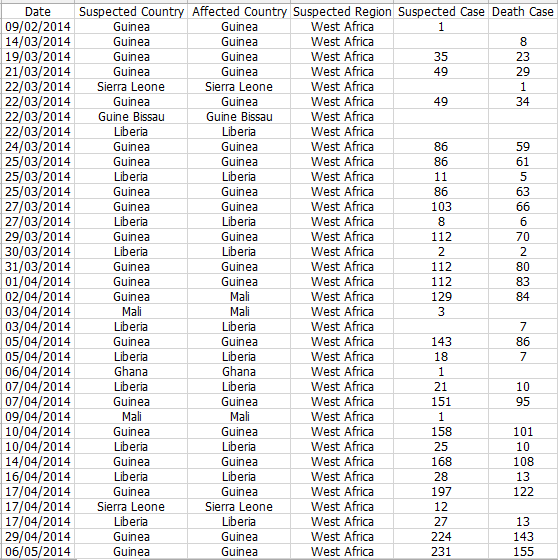 The statistical data have been collected from many websites and other resource, but I thank to healthmap.org from which I got more collective information. I acquired this Excel based data sheet to SAP Lumira. In SAP Lumira preparation phase, I performed some data actions to make data quality for analysis. Then I designed many visualizations and a story. Here I am listing my visualizations by storyboard with description. 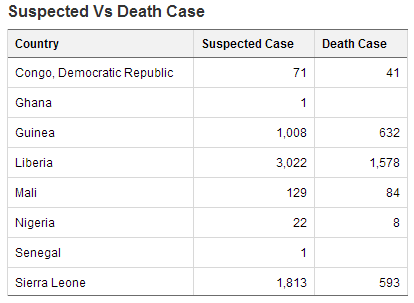 Viz 11 is a snapshot of Ebola outbreak with country wise suspected and death cases. From the Viz 8 we have identified the origin of the Ebola disease i.e. Guine but the most affected country is Liberia which is neighboring country of it.

I request to all to click on every graph and then have a look!!!