Make CORS work with Gateway and Chrome for local development

Or as the subtitle could also read: Overcoming “Access-Control-Allow-Origin”- errors

Setup in this example is:

There’s a lot written out there why Cross-Domain read requests (not write requests!) aren’t a good idea. They generally open up data transfer possibilities between domains. Which is something you don’t necessarily want – for production environments, that is. What you should also never cater to – use a proxy-based approach to consolidate data read access under one domain, either software-based or with middleware.

But what about development?

There are legitimate reasons to read data across domains in development scenarios. Not the least is if you want to work with features offered by SAP Gateway – accessing SAP Backend logic that is exposed via OData Services. Which means issuing cross-domain REST requests from your development machine to a Gateway instance. If you don’t have Gateway running on your development machine. Which is unlikely. So here we are…

The good and the caveat – SOP

First of all, in the Web’s overall architecture, there’s SOP or Same-Origin-Policy:

And “can interact” in the quote above should be read as “scripts running from one origin are generally forbidden to interact with scripts from another origin”. (Does that mean you can’t include content from different sites? No! Read on…)

Stir in some OData- and Gateway-spice and it adds up to the following:

The user agent (e.g. Firefox) is rendering the WebApp from origin1, let’s say running on your development machine at http://localhost:12345/.

Now, if the WebApp is trying to retrieve JSON or XML via OData from http://example.gateway.com:8000/sap/opu/odata/sap/ZService/Entity(1), the user agent will send an “XMLHttpRequest cannot load“-error and block the request:

XMLHttpRequest cannot load http://example.gateway.com:8000/sap/opu/odata/sap/ZService/Entity(1).
No ‘Access-Control-Allow-Origin’ header is present on the requested resource.
Origin ‘http://localhost:12345/‘ is therefore not allowed access.

This is due to SOP being implemented in all major user agents: the scripts in the WebApp are forbidden to consume resources from origins other than (in our example) http://localhost:12345/. Retrieving OData from the same origin such as http://localhost:12345/the/odata/endpoint would be allowed, retrieving http://example.gateway.com:8000/sap/opu/odata/sap/ZService/Entity(1) is not.

Note that we’re talking run-time and client-side here. SOP doesn’t apply to including JavaScript-files per se, it applies to the run-time interpretation of the script itself. So if you include JS-files via the <script>-tag, (e.g. <script src=”https://sapui5.hana.ondemand.com/resources/sap-ui-core.js“>), the JS-file will be downloaded from the remote address first. Then it will run from your origin, being interpreted by a user agent – that’s the moment that SOP restrictions will apply, not earlier.

Disclaimer: SOP is generally a Good Thing(tm). In prevents scripts from origin A to read data from origin B and transfer it back to A.

Which is exactly what you’d like to do in development 🙂

Google Chrome offers a way to turn off SOP.

If you start the binary with the switch –disable-web-security, SOP gets disabled, allowing client-side cross-domain requests.

We’re half-way there – cross-domain requests are allowed on the client-side now.

Even though the client now allows requests across domain boundaries, the server still needs to grant access to those requests.

A standard way of doing this is utilizing CORS or Cross-Origin Resource Sharing on the server-side.

In essence, this means sending a an “Access-Control-Allow-Origin” header back to the client, authorizing the client’s domain – or granting general access with ‘*’.

Note: ‘*’-access is exactly what all the Northwind OData Test Services do. And what explains their popularity in example code.

Per default, Gateway send similar headers such as these:

In order to send an additional, custom header from a Gateway-service, use set_header from Interface /iwbep/if_mgw_conv_srv_runtime.

It takes a structure as argument, consisting of a key-value pair.

This will result in the desired CORS “Access-Control-Allow-Origin” header, granting all clients (“*”) read access:

Bringing all the above together means that by

And there you are, hopefully hacking away happily on your local machine, calling Gateway OData back and forth 🙂

For development purposes only – don’t unhinge these web security fundamentals just to make a quick transition into production scenarios, please!

I like to think I am very conformatble inside SAP world but I have to admit to utter ignorance when it comes to terms like "starting a binary".

In a Windows enviroment is the "disable web security" is this a setting you change when you open the Chrome internet browser, or something you have to run from the command prompt, or something utterly different yet again?

the disable-web-security is a flag for starting Chrome - so you can e.g. add it to a Desktop Shortcut. You can't change that setting in about:config or such once the browser is running - the flag is valid for start-up only.

That is a useful clue. I have a desktop shortcut for Google Chrome. I wonder if you could tell me whereabouts in the following screenshot do I put the "--disable-web-security"? I tried adding it at the end of "target" but it did not like that very much. 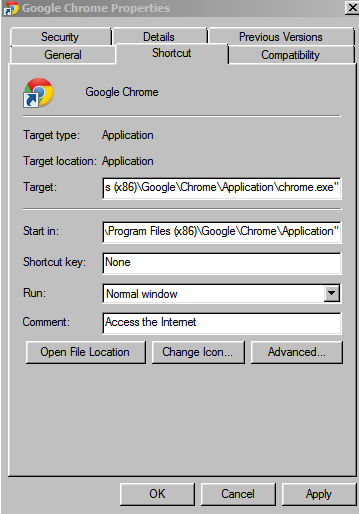 I appreciate this is probably obvious to most people!

Many Enterprise customers still use Interner Explorer as de facto standard. So we may need the same scenario above for IE.

You can set this in Internet Options: Go to the Security tab. For the current zone click the "Custom level..." button. In the next window, scroll about a third of the way down to "Miscellaneous > Access data sources across domains" and set it to "Enable". If the current zone is Internet, then you should add the site to the trusted and set this option for the trusted zone instead.

Note that this will effectively disable CORS and will not set the Origin header in the request. I like your blog 🙂 I have a question: have I to both on client an server side? I tried out the scenario and with Chrome and --disable-web-security everything is works - without and with Access-Control-Allow-Origin:

if you run both the UI5 app and the OData endpoint on the same server, neither --disable-web-security (client) nor Access-Control-Allow-Origin (server) is needed - you're not violating the same domain policy. This is also the desired setup for production scenarios (often this means "proxying" the OData resource to the same domain as the UI5 app) and what you're experiencing if you're running everything against the same GW install.

If UI5 app and OData endpoint are on different URIs (e.g. localhost:8000 and services.odata.org), both client-side and server-side tweaks are required to make the data provisioning work.

PS: Guessing the cause of the error 500 withouth knowing more about your setup (URI, JS code, ...) is somewhat hard 😉

got a question: I tried your server-side solution but I see no way to bypass the CORS check, e.g. the request seems not to arrive to my handler.

There is some special arrangement? At which level should I put the access-control on my SICF tree ?

I haven't made any modifications to the service in SICF after inital deployment of the OData service. This refers to GW & ERP being on the same instance. If you have GW in a stand-alone Hub install, you need to use the /iwfnd/* namespace for development instead of /iwbep/*.

I cannot get the Server side working.

On client side we either get a 405 or a 401 regarding what HEADER data we send on client side ( withCredentials: true or false).

The Allow-Origin header fields are set in method /IWBEP/IF_MGW_CORE_SRV_RUNTIME~READ_ENTITYSET but the client first does an OPTIONS call which seems to be unsupported in SAP Gateway (740 SP10).

Confirmed: up to the current GW version, OPTIONS calls are not supported:

/IWCOR/CL_DS_PROC_DISPATCHER->/IWCOR/IF_DS_PROCESSOR~PROCESS( ) only handles GET, POST, PUT, DELETE, MERGE and PATCH (depending on the resource called).

OPTIONS requests are typically triggered only if cusom http headers are set on the client side for the call. Your "withCredentials" flag hints that you're doing a custom ajax.get() that does just that, resulting in a "preflighted" OPTIONS request to the URL.

So getting rid of the extra http headers in the ajax.get( ) might be a starting point for solving the issue.

Now we are omitting the withCredentials header.

But we need to authorize at the Gateway server and also need to fetch an CSRF token, therefore

is needed, but triggers also the preflight request?

for authentication, you could do a GET on the service root, sending basic auth data (base64!) to Gateway (utilizing the underlying ICF basic auth).

CSRF for POST, PUT, DELTE should work out of the box since it's designed for cross-domain security.

All in all this looks more like a client-side issue than a GW problem - should take this offline, PM me if you want.

We have the exact same issue Mark has highlighted. Would it be possible for you to let us know how this was solved i.e. how to we ensure that that call from client does not end up being a OPTIONS method?

I did not find any time to investigate if Volkers answer would solve my problem.

Will keep you updated if I continue with this task but it may take some weeks...

I am new to Cors and its integration with GATEWAY, 😕 It'd be appreciated if someone puts more light on what is Cors, and how its related to gateway..

Thanks alot in advance. 🙂

I tried all the steps you mentioned, but still get the CORS 401 error. the data fetch fails.

I am running on local tomcat 8080 and trying to get the model on SAP server.

in the debug I still see the cors error.. I have done everything you mentioned. Tried many blogs somehow this things is not getting solved. Do you have any clue.

you're sure that the GW at http://sapdeverp.XXXX.XXX:1080 is sending the "Access Control Allow Origin" http header?

And you're sure that your local Chrome Browser was started with the --disable-web-security flag?

Thanks for your response. If I understand, you mean am I sending this one shown below.

Any inputs highly appreciated, unable to crack this one for many days now.

Now you need to make sure, that you have the client-side part prepared as well.

I assume you're consuming the service via some flavor of JS (UI5, jQuery, ...).

When calling the above service from your client-side runtime, you can either

- provide your runtime with a tailored platform, such as running the Chrome Browser with --disable-web-security

then you should be good to go.

Thanks once again.. I cleared the browser cache, and did a disable security using the command --disable-web-security. Yes, the CORS vanished now. But Alas! still data does not show 🙁 ...well that is another problem. let me deal with it 🙂 .

Hello thank u for your post ,I'm new in SAPUI5 and the problem of CORS is driving me crasy 🙁 , I didn't understand this part

in order to send an additional, custom header from a Gateway-service, use set_header from Interface /iwbep/if_mgw_conv_srv_runtime.

It takes a structure as argument, consisting of a key-value pair.

This will result in the desired CORS "Access-Control-Allow-Origin" header, granting all clients ("*") read access:

I am also facing the same issue. Could you please share if you were able to resolve this.

Can you please explain how to use the set_header in the gateway?

Also, if the server is telling the browser that there is no access restriction, you do NOT need to disable CORS in the browser.

is sent by the server, then you can use XMLHttpRequest from any webpage on any domain to pull data from it. See here for an explanation: https://stackoverflow.com/a/10636765/576850