SIGNS OF THE SEASON, PART II This directional sign utilizes stencil lettering, in the customary corn-green, to direct us to the corn stand. Opposed to hand lettering, stencil letters reside halfway between rough hand lettering and professional typographic signs. These letters are based on the font Bookman Demi Bold, originally a Scottish font from 1860 and revived by Ed Benguiat in 1975. Presumably, the stencil lettering is intended to provide a semi-professional look. This quality is somewhat diminished as the human hand gets in the way. The W is reversed, a W always starts with a thick stroke on the left, then a light stroke, thick again, and finishing with a light stroke. The stencil for the W must have gotten flipped in the process of creating this sign. 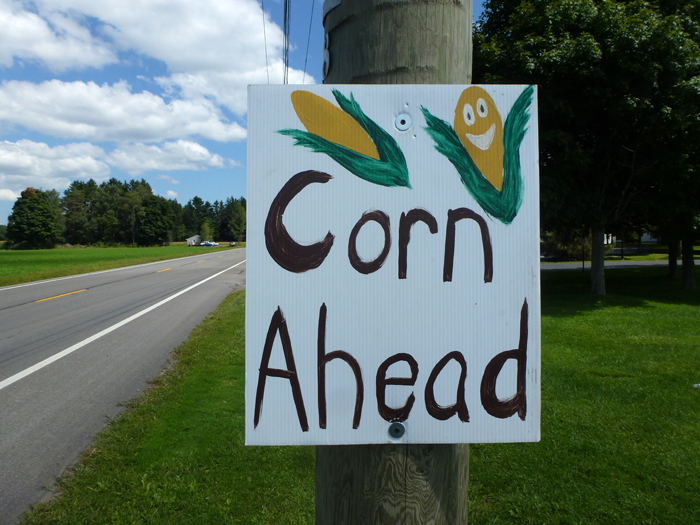 Of all the corn signs I came across, this one genuinely made me sad. Not because of the lettering with the overly thick C, and that same shape which forms the closing d. It was the painting of the 2 ears of corn at the top. Simplified, with no attempt to depict challenging kernels. Very painterly husks. But what I found disturbing is that one ear is alive, jubilant, bright eyed, smiling. Full of life. Had that been the only image on this sign, it would be fine. Or if the other image, the ear without eyes, mouth, personality was the sole ear on this sign, I could live with that too. But what we have is this contrast between two ears, one dumb and inert, a mere object devoid of character, it might as well be a rock, and then there is this vibrant, loveable member of ostensibly the same species. It’s too painful to contemplate, and I can’t fathom what was in the mind of the creator. 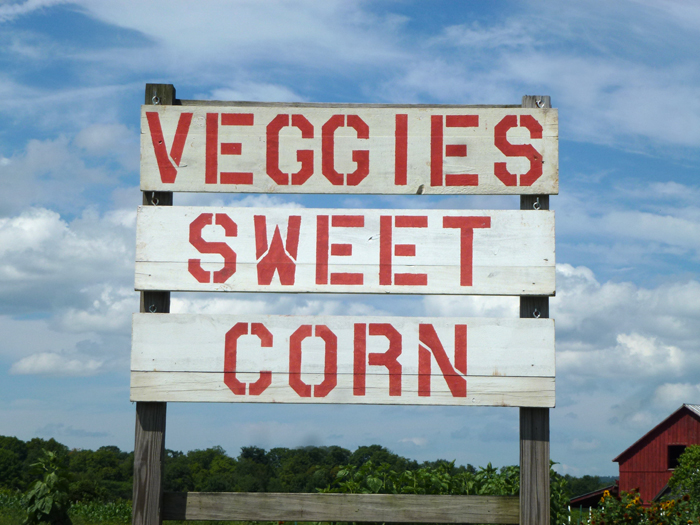 Here sweet corn does not get the top billing, though it receives two lines as opposed to veggies. Another stencil job, but a relatively unusual stencil. I have never seen a W like that before, divided into 3 pieces, two partial strokes and a single, very complex center/bottom. Most stencils are made with respect for the strokes in the letters where possible. For example, look at the E and the R; the unpainted areas follow the vertical strokes of the letter forms. That’s hard to do with the G,S, C, and O so it defaults to a vertical. On the W, as well as the V and N, the stencil maker seemed to break all rules and introduce new angles in the stencil that may be consistent with each other, but do not relate to any of the other letters. One wishes all of the letters were cut with a similar treatment. 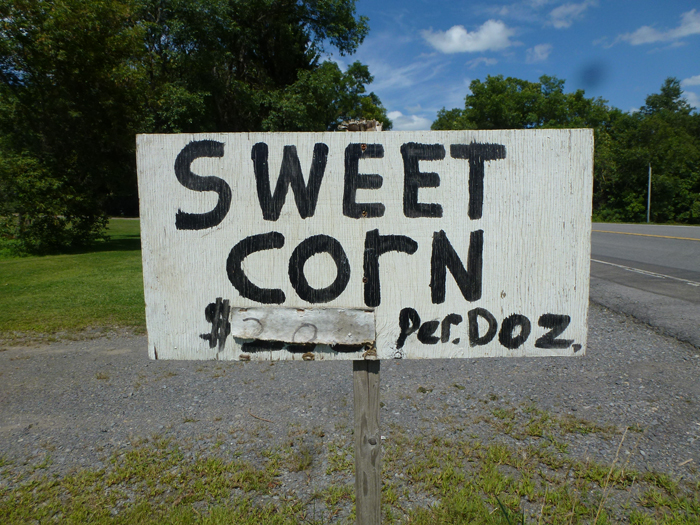 This is about as simple and basic as it gets. Black letters on a white rectangle. Minimal. No fancy stencil work, no color, no cutesy ears of corn. It is what it is, without apology. The only hint of character here is that lower case r among all uppercase letters. 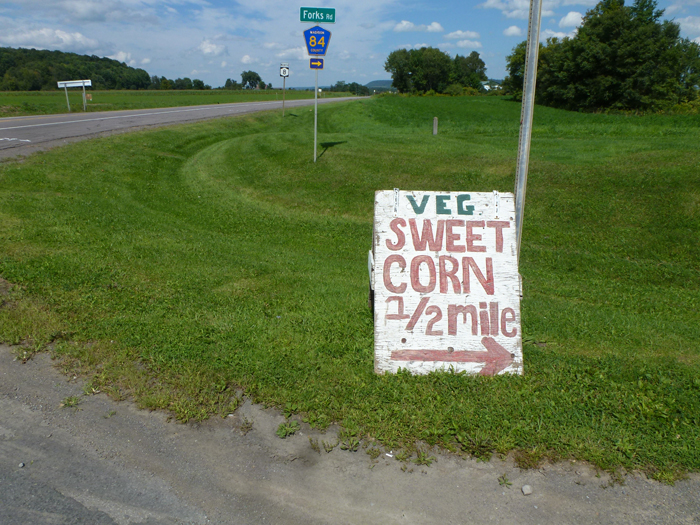 A sign that has seen many years of use, sitting in a barn for the rest of the year. Veg. Not veggies or vegetables. Veg. In an appropriate green. Otherwise red for visibility. The most notable element of this sign is the middle stroke of the m in mile. Blighted, undeveloped, a vestigial stroke. White background. Check. Green letters, all capitals. Check. But there is something enterprising about the vertical placement of the letters, it emulates the cornstalks rising from the soil. My favorite aspect, however, is the this-board-will-work-just-fine aspect of it. It’s almost a vertical rectangle, and apparently that was good enough, no need to trim that edge down. There is something of a Duchampian readymade to this sign. 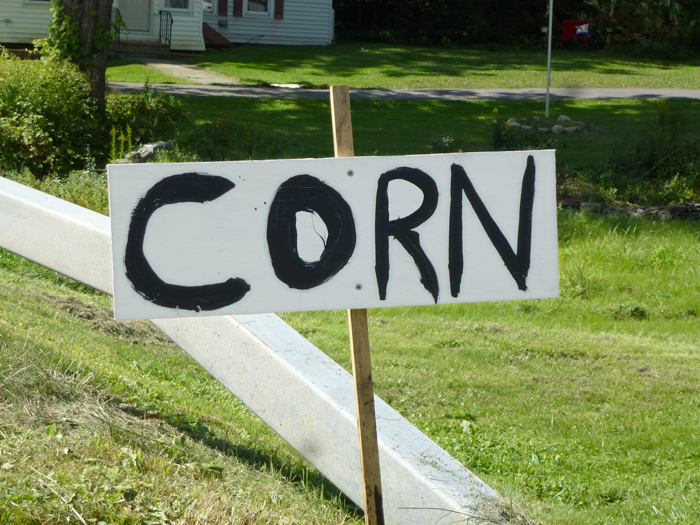 Another basic black and white job. After a moment all you can read is CORN due to the boldness of the first two letters compared to the last two. What is the impulse behind this gesture which occurs on so many hand made corn signs? 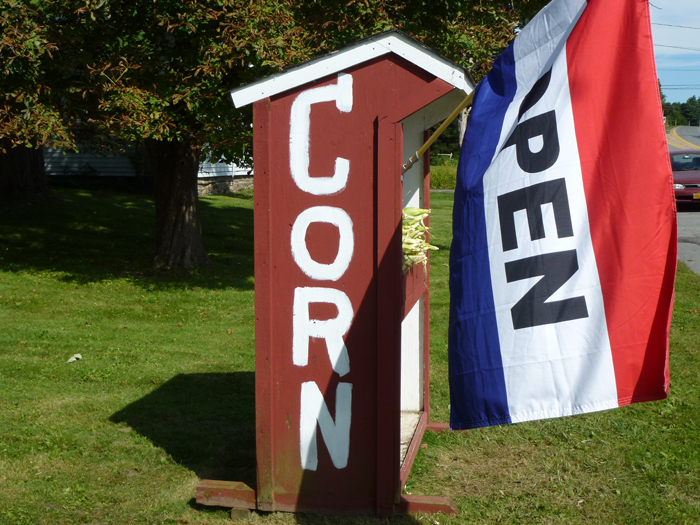 You know immediately this is serious. Architecture. Painted barn-red. And the storebought flag proclaiming the stand is open, not closed. The narrowness of the depth of the stand necessitated the vertical lettering. And the C felt so right at home that it departed from its usual letterform shape and started following the roof line while growing a solitary serif. 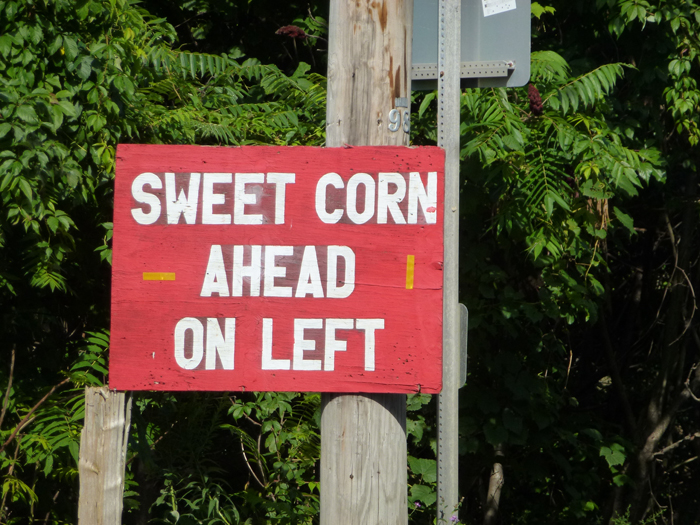 A sign that has been used for many years and recently had it’s background red repainted. Wary of messing up the letters, the painter carefully boxed in the words, kind of. There was more confidence when LEFT was reached, the L, F, and T are fully silhouetted while the space between the E and F were left in the old red. And, in the spirit of renewal, reflective gold tape was added to the sign, symmetrically placed on either side of AHEAD except one runs horizontally, the other vertically. 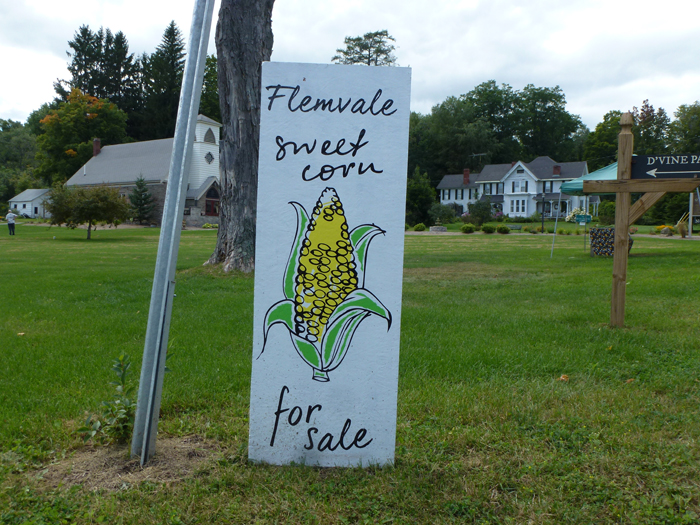 The most professional of the bunch with a stylized illustration of an ear of corn. Black lines define the image with hits of yellow and green which do not meet the black lines but create shapes of their own. This sign is branded with Flemvale, a family name. The lettering in a considered script. And just to insure there is no confusion, this sign clearly states that the sweet corn is in fact for sale. 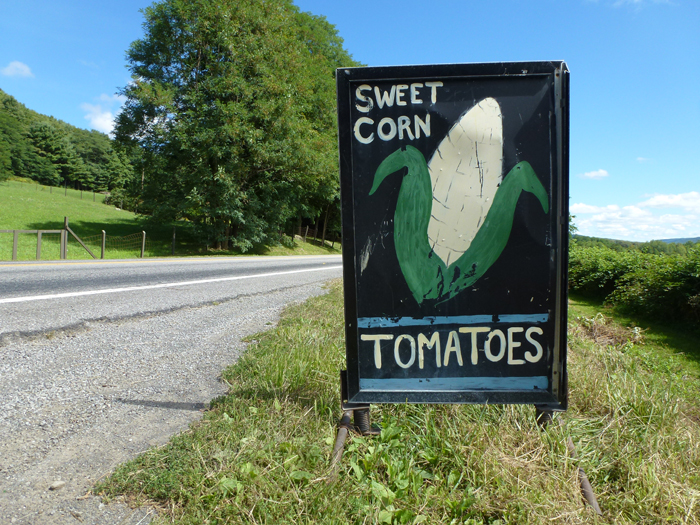 A modern, cool black background provides contrast for the yellow and green. SWEET CORN tucked into a corner. Larger at the bottom is TOMATOES separated from the rest with a sky blue rule above and below.

Every sign distinct. Every one quirky in its own way. Every one uses some conventions from contemporary design and branding, and radically disavows others. And yet, during a summer drive in the in the Southern tier of New York on a hot August day, each one is perfect.