SIGNS OF THE SEASON, PART I

I spend a lot of time in the country in upstate New York during the summer. As much as I love the constant intensity of New York City, being in the country provides a sense of balance, it is everything the City isn’t. Quiet, lush, slow. August is a particularly rich time to be there because that’s when the local produce comes in. While we can fly in every variety of vegetable year round to our supermarkets, everyone recognizes the downside of such progress; the loss of quality, of flavor and taste. So August, when farm stands sprout in in New York’s Southern Tier and other rural areas across the country, is a time to celebrate, and eat. In a short time the vegetables just picked this morning and set up roadside will be gone, and we’ll be back to the factory produce for another 10 months.

Visiting these local farm stands isn’t only a culinary experience. These stands also provide their own sense of graphic, and visual, culture. Like the corn, tomatoes, cucmbers, garlic, and beans, the ways in which the local farmers attract our attention as we drive through the countryside is equally locally sourced. This summer I focused on the humble yet spectacular sweet corn signs. Mostly done by hand, their varied forms, from typographic influence, calligraphic flourish, to pictorial references, constitue a genre of graphic design. They are an announcement of good news, of hard work, and very good eating. 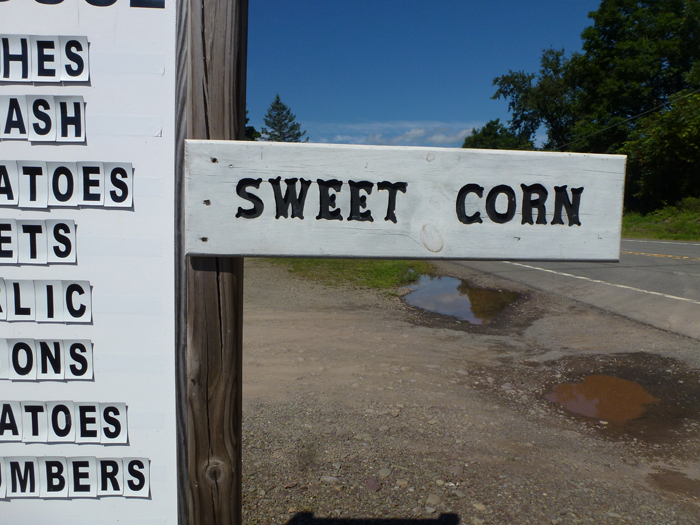 This sign has the usual produce listed in a single column in a hardware-store-stick-on-mechanically-produced sans serif typeface in all capital letters, something you often see on mailboxes. But when the corn is in, it can’t just be another anonymous line at the bottom of the sign. A separate panel juts off from the main sign. And those boring letterforms that people use on their mailboxes won’t do either. No, the new crop of corn deserves the care of hand lettering, it deserves a bold weight, and most importantly, it merits some curves and hints of serifs that remind us of wanted posters from the wild west. 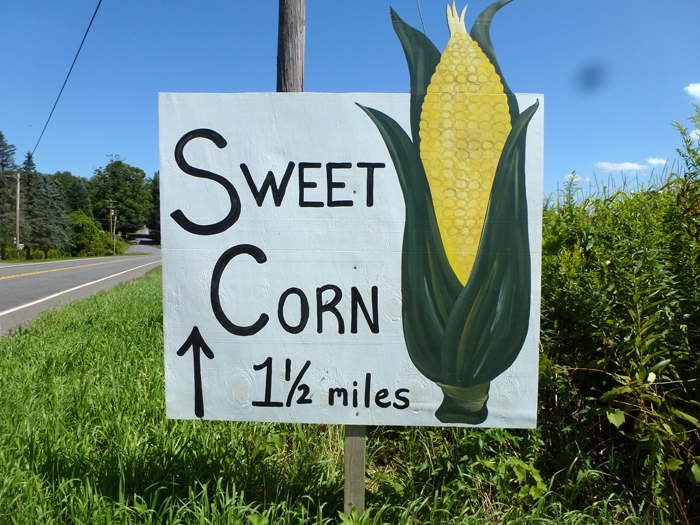 Here the first letters of both words are over-sized. The S and weet are vertically centered; the weet does not align with the bottom of the S as we would usually expect, whereas all the letters in the word Corn align on a common baseline. Some signs are pure typographic expressions, while others include an image of an ear of corn. This one is relatively realistically rendered and includes the surprisingly modernist gesture of breaking outside the boundary of the picture plane/sign. The ear of corn is too big to be contained by the white bounding shape, and while it squeezes into narrow margins at the bottom and right side, it erupts through the top. 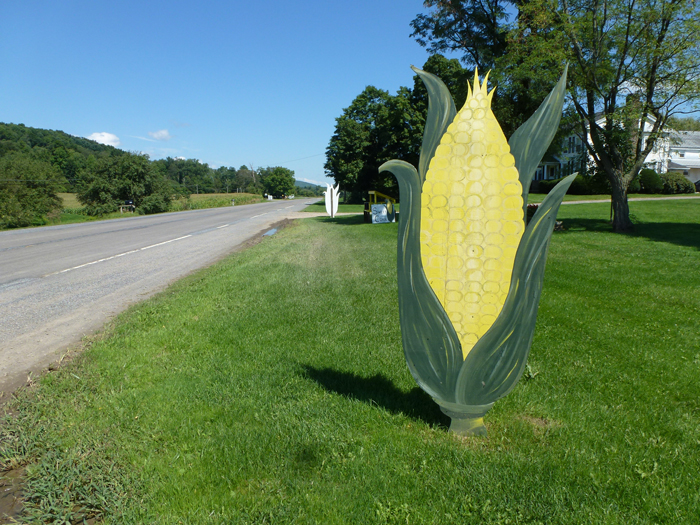 A mile and a half down the road, language is dispensed with, as is any rectilinear sign shape. The ear of corn is presented as a gigantic object, larger than life, seemingly growing out of the lawn without any need of a stalk. 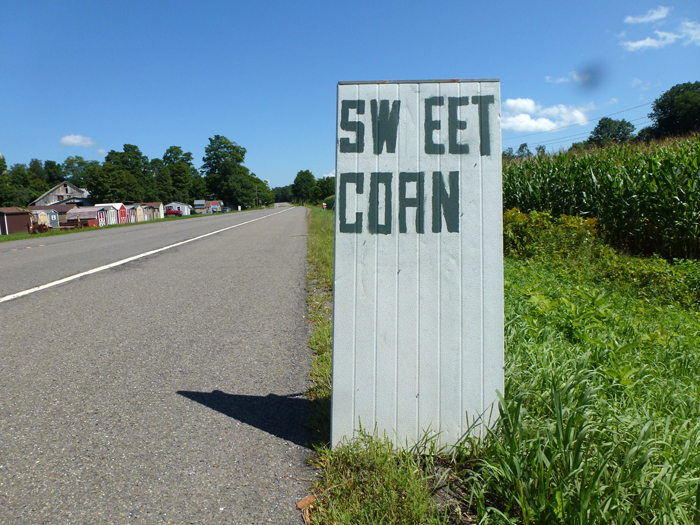 One of my favorites. A sheet of paneling painted white. All capital letters, very geometric, rectilinear letterforms that echo the dimensions of the panel. The letterforms have no curves, rather a squared off S, and R that were it not for the context would read as an A. Green letters remind of the color of husks. And while this is all very rational, the inexplicable moment of this sign is all the space between SW and EET. Try pronouncing it with this built in pause, it turns it into a 2 syllable word, it makes you slow down on the word SW EET providing a bit of emotional inflection. 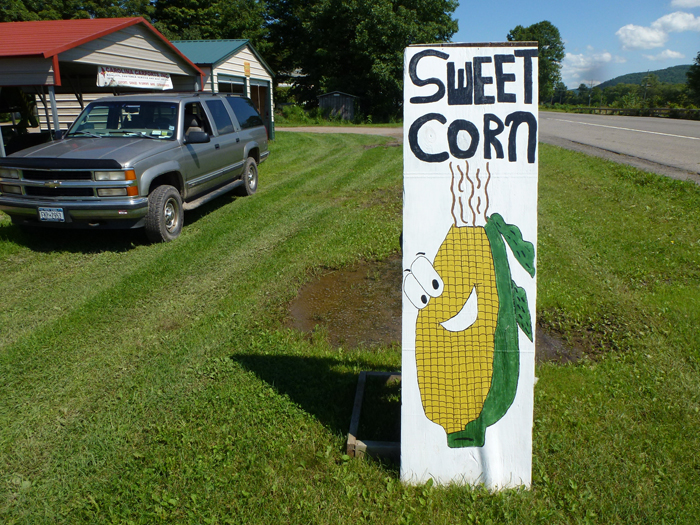 Let’s start with the type. Notice how the S (forget the oversized top curve) and the T are the same height while the W is smaller and the two Es grow progressively larger. Again, try pronouncing it the way it is written, it ends on an emphasis of the T at the end. Again, it just doesn’t read like a regulat typeset word, it includes another voice inflection. Look at that W, unlike any typographic W, it appears like an E rotated onto its side. Lastly, if all that isn’t enough, check out the lowercase n with its sweet little tail.

This illustration is notable for its combination of styles. The cob and husk are pretty much what you expect in corn country, the silk reminds me of stink lines, but the characterization, the eyes and mouth are very much out of a contemporary cartoon such as Aqua Teen Hunger Force. The interesting thing about this ear of corn is how the cob at the top, on the left side, is wider than it is at the bottom. The peeled back husks are thin and somewhat leg-like. The rows of kernels are straight horizontal lines broadly spaced vertically while the vertical edges of the kernels carry the curves, almost looking like scales. Note the W in SWEET, there is a reason we call the letter a double-u. A less geometric W than in the previous image. 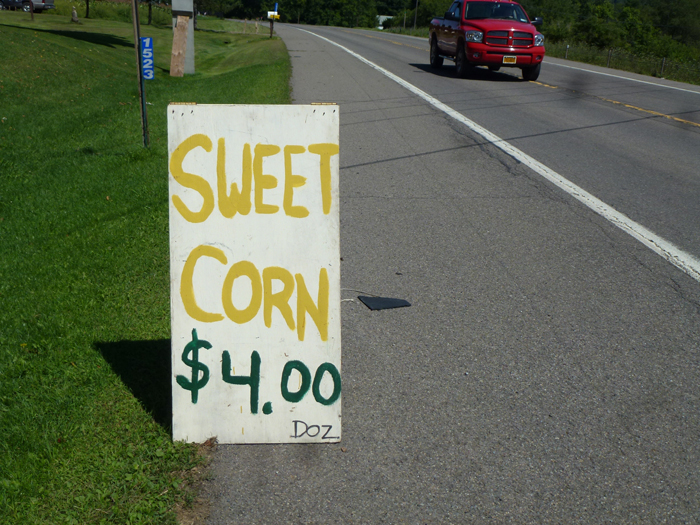 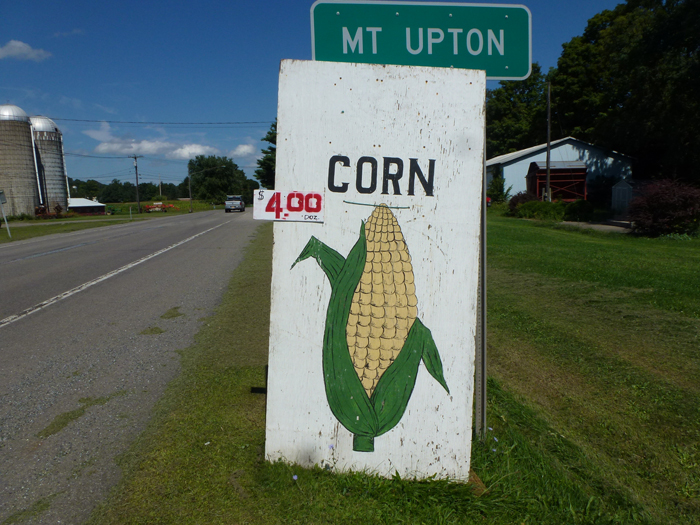 Double duty. Either the image or the word would work by itself. This one doesn’t strain to fit onto the panel. The designer recognizes the value of ample white space. 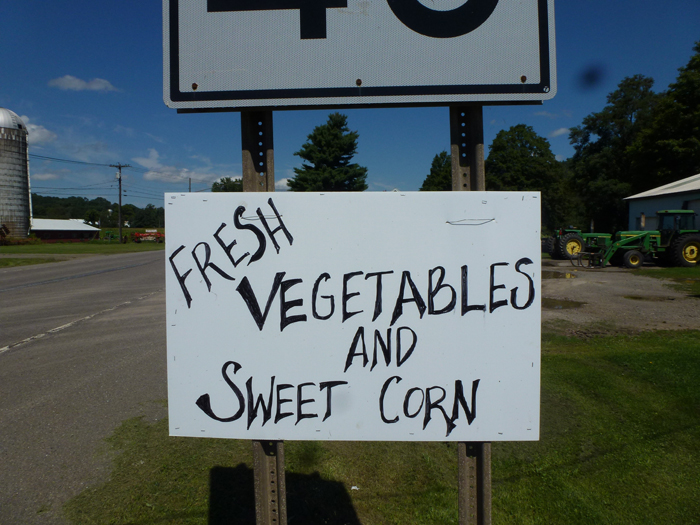 Fresh vegetables and sweet corn. Only the corn is called out by name, everything else falls under a generic heading. Much more expressive lettering than most. First, the Fresh on a diagonal for emphasis. Then an attempt to augment basic letterforms with expressive characteristics. This occurs in varying degrees. The V in vegetables, the S in sweet and the RN in corn receive exceptional attention with bolder strokes or near serif treatments. 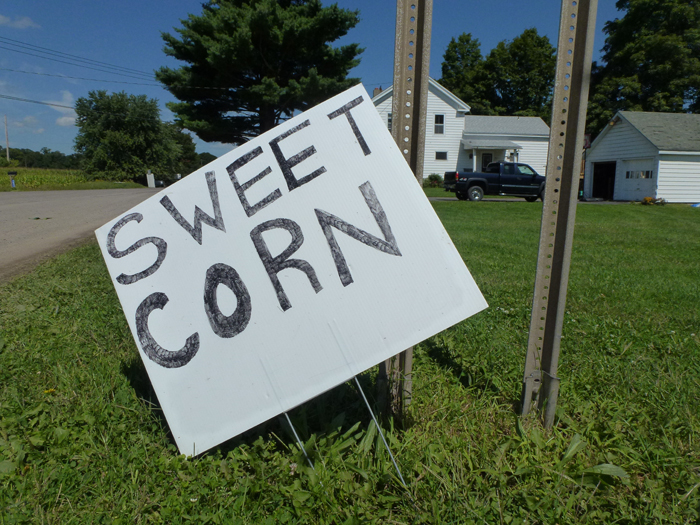 A rather casual display, both in placement and lettering. But extra effort did go into the C and the O. They are bolder than any of the other letters. Had the S and W been bolder than the rest, we might attribute this to putting a lot of effort in at the start then getting tired at the expenditure of such time an energy and dropping the idea of bold letters after having completed two. But, how can we explain the C and O? A search for brief entertainment midway through the lettering?

What a wonderfully software-issue-free post! Thank you so much for sharing your passion for typography, graphic design, and the various delights of fresh food!

It is a crisp autumn morning here in Germany, where I have been living now for many years, but your post hurtled me back to my childhood growing up in upstate New York and the glorious fresh corn season. Germany has many wonderful culinary offerings and my family and I hardly ever miss a Saturday at the Wochenmarkt, but they just don't do corn here (well, you can buy it, but they just don't get it). The Germans are perhaps as fanatical in terms of freshness and variety about white asparagus in the spring as we are about corn in the last summer, and there is some solace in that because it is really wonderful, but I do miss a cob of freshly picked Silver Queen luscious and hot out of a big pot of lightly salted boiling water. Maybe I'll share a post next May about asparagus (including the signs at the market stands). You might have to help me with an analysis of the typography though!

Thanks for your response, glad it brought back some memories. Keep me posted on asparagus in the Spring.