In this document explaining a scenario, where we need to identify the total numbers of BW Workbooks are created on the BW BEx Queries.

Below are steps to identify the BW Workbooks.

Go to T-Code SE11/SE16: Select the Table “RSRREPDIR” (Directory of all reports) and provide the BW BEx Query name. 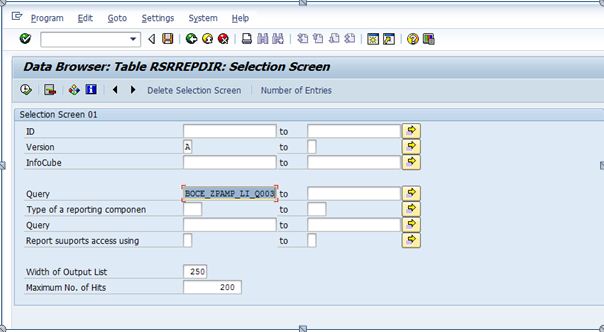 Then you will get the “GENUNIID” for respective BEx Query.

With the help of “GENUNIID”, we will get the “WORKBOOKID” easily.

Now again, Go to SE11 and select the Table: “RSRWORKBOOK” (‘Where-used list’ for reports in workbooks) and put the “GENUNIID”.

Below are the Workbooks are exists on the BW BEx Query.

Above steps concludes, how to identify the existing BW Workbooks.

Just one more addition would have been really nice if  you would have explained in the document a little bit more about the relation between the RSZ tables ; like you have used two tables RSREPDIR  report directory and RSRWORKBOOK  using the GENUINID(Query) value from one table into another..
Thanks. 🙂

Useful info. Thanks for sharing.

Good doc, thanks. An idea is to create a view (se11) to join those tables and to get all this information in one shot.