Actress Emma Watson on Saturday formally invited men and boys around the world to become feminists. And she did so at the U.N. headquarters in New York, six months into her role as U.N. Women Global Goodwill Ambassador.

“Gender equality is your issue too,” Watson said. “I’ve seen my father’s role as a parent being valued less by society; I’ve seen young men suffering from mental illness, unable to ask for help for fear it would make them less of a man.”

Watson’s speech helped launch the HeForShe campaign, a gender equality movement that aims to recruit men in support of women’s rights and, by extension, human rights. She noted how difficult it is to effect change when only one half of humanity is involved.

“Fighting for women’s rights has too often become synonymous with man-hating,” Watson said. “For the record, feminism by definition is the belief that men and women should have equal rights and opportunities; it is the theory of political, economic and social equality of the sexes.”

But Watson’s remarks went beyond discrimination and pay disparities, speaking also about the negative consequences of gender inequality for men. Suicide claims the lives of far more men in the U.K. aged 20 to 49 than car accidents, cancer and heart disease, Watson noted, adding that many of those men don’t seek help for fear of violating masculine stereotypes.

Indeed the state of women’s rights is gloomy in many parts of the world. The militant group Boko Haram (whose name means non-Islamic education is a sin) still holds more than 200 of the schoolgirls it kidnapped from their dormitory in Nigeria on April 14. Meanwhile acid attacks are still common in places such as India and Pakistan.

“I am one of the lucky ones; my life is a sheer privilege because my parents didn’t love me less because I was born a daughter,” Watson said. “My school did not limit me because I was a girl; my mentors didn’t assume that I would go less far because I might give birth to a child one day.”

Data and polling guru Hans Rosling’s TED Talk earlier this year highlighted people’s propensity to guess that girls around the world receive far less schooling than boys. Rosling chalks it up to our inflated awareness of a few cultures’ “disgusting” practice of discouraging girls from education.

“But in most countries, girls go to school as long as boys,” Rosling said. “That doesn’t mean that gender equity is achieved — not at all — but schooling is there in the world today.”

Education leads to opportunity, and opportunity leads to hope. So gender equity can be the rising tide that lifts all of us.

Are Women As Capable as Men in Business?

The Greatest Accomplishment of our Generation? 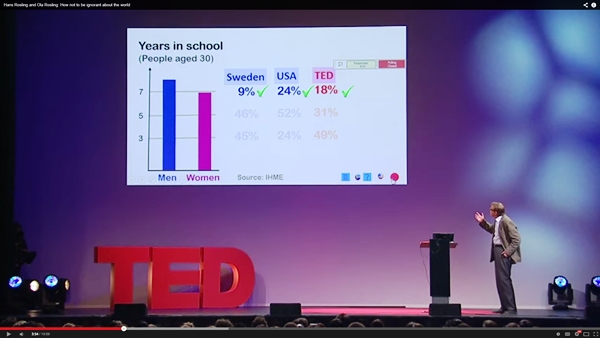