The Mysterious Case of Coors Field & the Colorado Rockies Humidor

Note: All of the DataViz referenced in this Blog can be found in the SAP Lumira Cloud.

The unique nature of the Colorado Rockies’ Coors Field and the effects it has on the game of baseball has been well documented in terms of the number of runs scored and home runs hit at Coors Field ( A Ton!!! ).   Some of the things that make Coors Field so on the unique scale range from the Mile High Air which lets the baseball carry farther and to the installed Humidor to store baseballs done in an effort to ‘deaden’ the balls and combat this Mile High Effect.  One of the more interesting effects from Coors Field is the effect that leaving Coors seems to have on the  home town Rockies when they hit the road and their offense goes from Ruthian to downright Mendozaian.

Is it Coors Field and the Mile High Air or the Humidor in play here? Or are there some other effects which cause this decline in performance when the Rockies leave home.  Either way a fascinating topic and let us begin our DataViz and some fun analysis…. But first a picture of the star of our show – The Humidor!!! 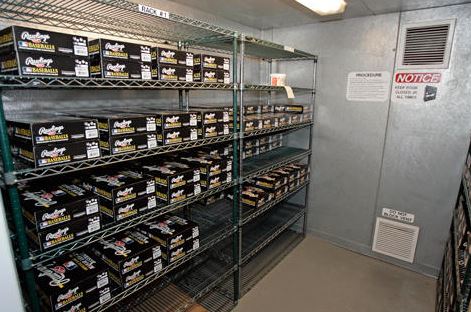 Splitting the Difference: the Rockies at Home and Away, 2009-2013 | Rockies Zingers Colorado Rockies Baseball

For our analysis today we will look first at the overall uniqueness of Coors Field in comparison to other MLB Venues and then dig deeper into the run suppression effect that seems to grip the Rockies.  The angle we will peak at today is to check out if some of the strategy employed by visiting teams to pitch to the Rockies in Coors may be playing into their lack of ability to hit when they leave home.

Our data and information used today comes from the following sources and for any geeks in the baseball world I think you will know them.

Fangraphs – For some advanced stats and high level PitchFx data

Note: No one seemed to have the full complement of PitchFx Data broken down at Home vs Away levels which is the crux of the data I wanted to look at so to dig into this further my main effort was to look at the Colorado Rockies 2014 games played through September 20, 2014 and pull the PitchFx data for the top 9 hitters by Plate Appearances on the team. This will at least give us the bulk of PitchFx data for 2014 to date and if and when I am really bored or someone else jumps on this they can find the data or scrape it together for all 2014 and beyond.

The most visual nature of how different Coors Field is from all other MLB Venues is best shown in our Scatter Plot of Hits and Runs by Park Name. Shining like the North Star all by lonesome is Coors Field showing a whopping 1.51 Runs and 1.3 hits more per game attributed strictly to the Park.   Many other venues have their tendencies but the off the charts differences at Coors compared to the jumble of all other venues is evident.  In terms of Runs Chase Field (1.19) is the closest and in terms of Hits Target Field (1.08) is closest.  Yes – for those scoring at home it is a 22% increase in Run factor and a 10% increase in Hit factor for Coors over its closest competitors!!!

One interesting item of how Coors Field plays to extend on is that the Humidor Effect and the deep fences have done a relatively good job of limiting home runs at Coors.  If you look at our Tree Map and scatter plot below it is clear while Home Runs are bountiful you will see Yankee Stadium at an identical Park Factor adjustment (1.41) as Coors Field and Great American Park (1.35) and the Rogers Center (1.34) within striking distance.  So in the end while Home Runs contribute to the runs the scoring results that make Coors the King Kong of scoring come from the overall number of additional hits at Coors and not expressly from the long ball.

…. And I Love Tree Maps to get some more visuals on this – breathe it all in!

Now we present our Geo Bubble Chart of Runs scored! This doesn’t really provide too much technical value add to our discussion but it sure is pretty!

The Coors Field Effect On The Rockies Offense

Now we are onto the deep dive of our journey looking more specifically at the effects that Coors Field has on the Rockies when they leave home.  Yes – that is right when they leave home! Hopefully by now you have read some of the related links on the topic I posted above so we won’t rehash them here.  But the question I wanted to dig a bit more into was the following:

Is there something specific to the strategy that opposing pitchers employ to attack the Rockies when at Coors that has a carry over effect when they go on the road? We always hear about how the ball carries farther in Coors and how it affects curve balls but how can that affect the Rockies when they leave Coors and hit the road? Maybe a Higher % of Hard Pitches and less Offspeed and Breaking pitches leads the Rockies hitters to be less effective in dealing with these pitches when on the road?

For this data analysis I pulled from our friends at Brooks Baseball the Pitch Usage and Results data for the top 9 Rockies hitters in 2014 in terms of Plate Appearances.  This gave us 1,073 plate appearances and allowed us to focus on the specific pitch outcomes of Hard, Breaking, and Offspeed.

Off the top the most interesting find is that there are 7.4% more pitch outcomes of Hard at Home in Coors Field vs on the Road.  But of course given the fact that there are often more runs scored in Coors than on the Road that would be somewhat evident to begin with.  So we need to look a bit deeper at this and the overall percentage of pitches thrown between Home vs Away to see if there is any significant difference in approach.  There is a small difference overall in the percentage of Hard pitches thrown at Home of .5%. But it is imore interesting to see there is nearly a 2% less difference in the amount of Breaking pitches thrown at Coors versus what is thrown on the road.  So possible that there could be a compound factor at Coors that given the Breaking pitches break a bit less at altitude the teams are ever so slightly less inclined to throw them at Coors given the lessened effectiveness.   But overall this slightly less than 2% isn’t most likely statistically relevant in and of itself but does show a change of intent at least on a small level. So this coupled with the overall lessened effectiveness of the Breaking pitches in general could cause a problem for the Rockies hitters when they leave home.

… and now the Pitch Outcomes as a Percentage for both Home and Away. 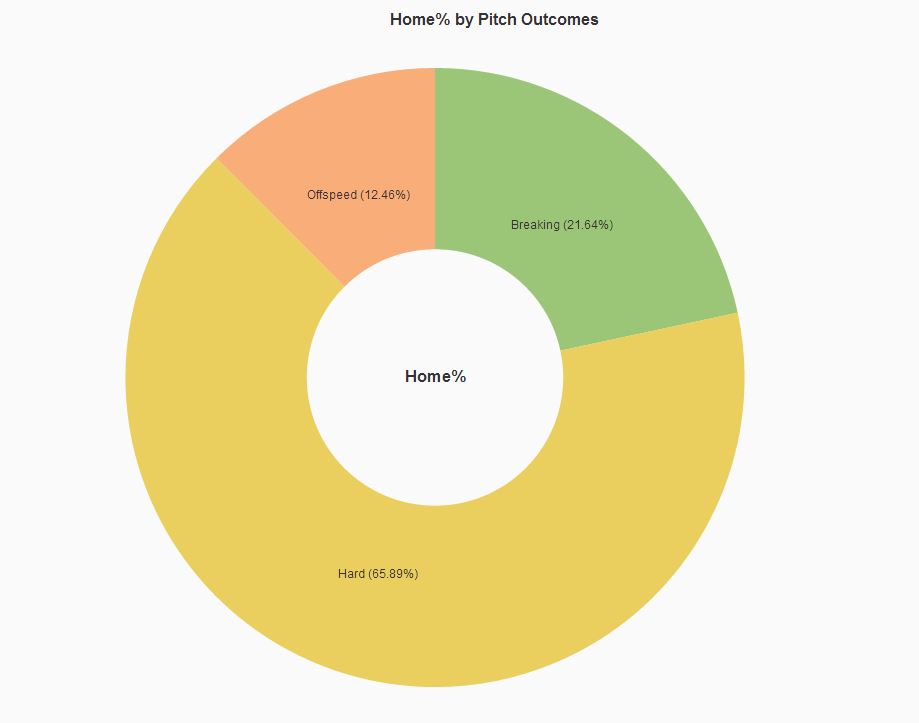 To look at this a bit deeper we have a line chart which shows our data set of the top 9 Colorado Rockies hitters with their relative Home vs Away Pitch Outcomes for you to compare. Seems pretty interesting doesn’t it?  Overall there is very little relative difference in Breaking balls and Offspeed for all of our data set.  But for the Hard stuff we can see some pretty profound differences for Charlie Blackmon, Drew Stubbs, and DJ LeMahieu. Could we have something there?  Not really sure at this point as we do have to tease it out but it is amusing as to why their pitch counts would be so variable based on Home vs Away.

That is our DataViz and deep dive analysis for now on the topic of The Mysterious Case of Coors Field and the Colorado Rockies Humidor!  Hopefully this sparked your data curiosity to dig into this topic.  For the record I am not a big baseball guy at this point in my life but I find this particular subject matter as well as the raw data available for baseball quite amusing and I can forsee lots of DataViz fun in our future!

Great work Voz!  Do Hockey next!  Find out why my Vancouver Canucks can't seem to win a cup.

Hehe... I would but the Godfather of Pecota and Data Journalism tackled the topic last year!!!