If we go back to year 2007 the SAP UI word had simply related to SAP GUI. Since then the SAP UI has evolved into Web UI which is an essential part of their business suite products (SRM, CRM, PLM, SCM).

From the end user perspective, SRM UI that comes with SRM core release is still considered complex due to many elements or fields. SAP addressed this problem by providing SAP SRM UI 1.0, a simplified shopping UI which is best suited for casual users. This new UI is developed using ABAP add-on and HTML5 as a base technology.

For SRM 7.0 this new add-on level delivery does make sense as it provides new user interaction without disrupting the underlying business application.

We will have to start understanding the UI evolution to start with SAP GUI. For consultants with MM background its very easy to observe the new Enjoy UI (ME23n) that was delivered with ME23n which can be accessed in SAP R3 4.6 onwards. It was a classic example of decoupling the UI development from Business Application.

This decoupling UI trend went into the technical concept of decoupling the Dynpro business logic from the UI logic of the app using web HTML technology – so the SAP Internet Transaction Server (ITS) was developed. The main purpose of ITS was to transform the SAP GUI to Web UI.

Today the need is more to connect devices, environment and platforms to SAP system. To Achive this SAP has delivered new technology called NetWeaver Gateway. This framework specifically targets decoupling data from SAP backend systems and enabling easier consumption based on OData.

Then comes the SAP UI Add-on built on top of the Gateway infrastructure as an SAP UI package of specific components, while being decoupled from the backend of the application.

SAP FLORI is recent development, these are ready to use application suites available from SAP. There are more than 5 SRM ready to use UI apps available in SRM EHP 3 (SRM 7.03)

SRM UI 1.0 is the simplified shopping UI available through series of UI components as shown in the simple architecture diagram below: 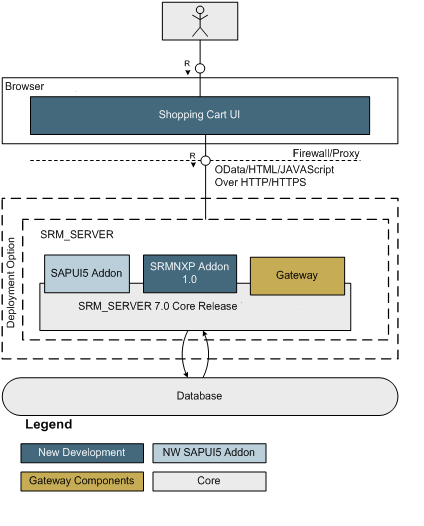 Key steps for SRM UI 1.0 set up are as follows:

The reason I ask is that we are using SRM 7.02 One-Client inside ERP 6.0 EHP6 and we would like to use SRM UI Add-on