The Cloud Strategy & Co-Innovation Team where I’m member of is focusing on the topic of digital transformation for a couple of months now and published already a few blogs about it:

In this context I was given the chance to attend the Digital Transformation Summit + Award which took place on September, 16 this year for the first time. It was hosted by Wirtschaftswoche, a German Economic Journal and Neuland Group, a consulting firm that helps companies in making full use of the potential of digital transformation. The event took place in the „Bundesministerium für Verkehr und digitale Infrastruktur“ in Berlin. After interesting presentations from companies such as Google, Daimler, Neuland and many more, awards were given for leading projects in the categories: Best Customer Experience, Best Businesses 2.0 and Best Product & Service Innovation. Special congratulations to the winners again. More information about the event and the full report can be accessed here: Homepage, Facebook,Twitter. 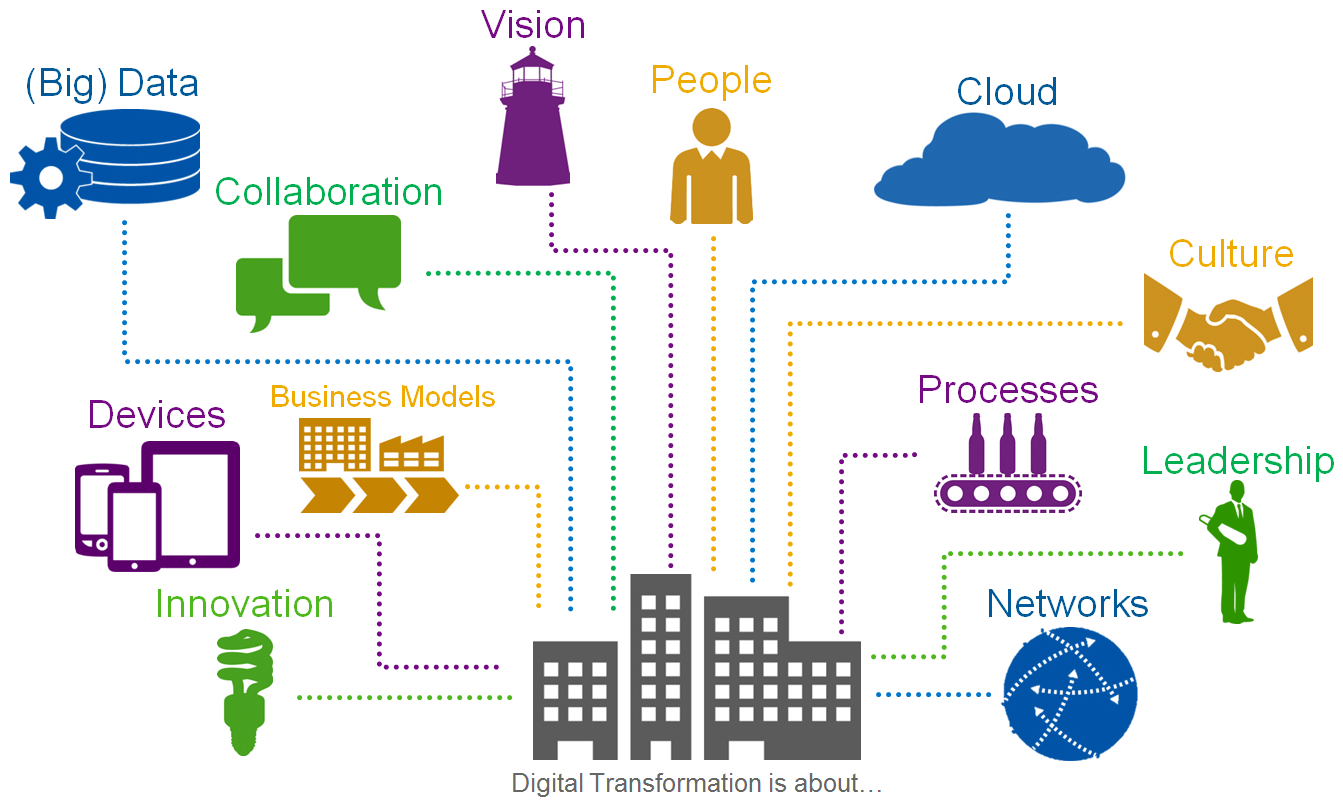 Karl-Heinz Land, founder of Neuland Consulting and also host and sponsor of the summit is a so called Digital Darwinist and Evangelist, as he explained to us. Darwinism means that there is a revolution going on – a digital revolution. Adapt or die is the motto. Companies have a lot to do. But as a digital evangelist he is also the bearer of the glad tidings of joy – there is also great potential to do something. According to him it’s the third step in the industrial revolution after the steam engine and electricity. A revolution has never been more disruptive than the digital revolution. Just think of physical goods becoming apps and the impact for entire value chains. Karl-Heinz Land illustrated it with the example of a key. With homes are getting smarter or manageable and lockable with an app on your smartphone or hotels start to replace their key cards with apps as Hilton already did. Consequently the demand for physical keys will decrease. But not only for keys decrease, also the demand for key-creating machines, the demand for each part of this machine, down to the basic materials for producing parts.

Same trends can be found in the automotive industry. Cars are no longer seen as a status symbol especially from millennials not. Car sharing is evolving. Companies like Daimler need to predict what their customers want. Customers have been the king ever since, but now in the #DigitalRevolution they also wanna be treated accordingly.

According to Prof. Dr. Herbert Kohler (Head of „E-Drive & Future Mobility“, Daimler AG), they have recognized this alteration and are currently preparing for it. There are 3 places where people spend the most time in their life – at home, at work and in their car. Thus the car has to be as connected as the other two places. Let’s think of the navigation system that transformed from analog to digital, making travelling to unknown places a lot more convenient. Unfortunately it stops at the parking lot so far. In future this chain of navigation has to be extended through the connection between mobile devices and cars, specifically to the very end where the customer wants to go – a café, a restaurant, an event or whatever. But is this really enough to satisfy a customer today and in future? The answer is NO!

BWM and SAP teamed up already to bring us a step closer to the new level of customer expectations.

Because operating the car from outside with a mobile device will increase, Daimler built up a new online service called “Mercedes Connect Me”. Every customer gets a unique ID when purchasing a Mercedes. Customers can then sign in to the Mercedes service website to get an overview of a various bunch of new value added services – accessible from every device!

Another key trend in this industry is augmented reality. It’s the first step towards autonomic driving. Today a driving assistance is integrated into the windshield. It already supports the driver with additional information when he or she can switch lanes or gets too close to the ahead car, but still needs the full attention of the driver. These support services will increase in the future. Cars will get more autonomous and there is nothing to be concerned about due to the fact the 93% of all car crashes are caused by human and not by technology failure.

If you don’t believe in these predictions just think of all the things that we designated as “science fiction” in the past and are reality already today. I would claim that everybody equipped with a smartphone today is more powerful than Mr. Spock & his TOS communicator in Star Trek.

But back to autonomous driving. A company to mention when talking about this topic is Google. No steering wheel, no break, no throttle. Google already built an own car that bring people from A to B – Autonomous! It’s a little bit astonishing because of the fact that Google is actually an IT company from Silicon Valley. However with the massive amount to data they collect every day, they are in the position to compete with an increasing number of companies of various industries. It’s their intrinsic motivation to constantly search for new opportunities even though they are already one of the most valuable companies in the world. For example their search engine, the core of their business will ever remain as a challenge for Google. Philipp Justus (President, Google Germany) said that the search has to be constantly transformed – with the rise of mobile devices where it is harder to type letters – towards direct answers, voice search, and anticipation. They won’t ever rest on their success.

Success by the way was figured out as the worst enemy for established and successful companies on the panel discussion between Dr. Roman Friedrich (Partner Strategy&), Gunnar Froh (Founder & CEO of WunderCar Mobility Solutions), Hagen Rickmann (Head of Sales, T-Systems) and Karl Heinz-Land. Companies who won’t follow the example of Google will soon face the destiny of dinosaurs million years ago. They will get hit by a meteor, a digital meteor and will become extinct, as Karl-Heinz Land put it.

Just to make sure digital transformation is basically about the four building blocks, outlined by Sven Denecken in his latest blog where he talks about cloud, devices, data and networks which enable companies to digitally transform their business. However companies must understand that digital transformation is also about changing business models, leadership, strategy and culture.

This is the reason, why companies are really struggling with the digital transformation as they are not able to change their organization accordingly, towards an agile environment and an innovative culture where creative ideas and collaboration are promoted. And this will be a huge challenge as customers becoming entrepreneurs more and more. For example readers become bloggers (Twitter), landlords become hoteliers (AirBnB), car drivers become cab drivers (Uber) and every private person could probably become a producer of commodity goods with just a 3D printer.

With this evolution services are getting incrementally decentralized, but these services also need new laws and regulations. While large enterprises struggle to disrupt their currently successful business models, start-ups primary strive with totally different hurdles. Gunnar Froh, CEO and founder of a start-up told us that they spend a lot of effort in communicating with politics and legislation about new laws, because current ones are complicating their growth.

Dorothee Bär (Undersecretary of State, Ministerium für Verkehr und Digitale Infrastruktur) admitted in her speech that laws and regulations are no longer up to date. The reason is that the demands and needs of our society had been different in the time when laws were adopted. The good thing is that there is a new sense of urgency to find answers for these evolving new services. Politics should not slow down new disruptive and innovative services, just because they don’t match with the legislation from the past.

To sum it up, it was a really interesting event with valuable insight from business which left food for thought to keep dealing with the digital transformation and how it will keep changing our daily life.

Hi Nikolai, very well written and spiced with great examples all over the place. I like the specific view on cars:

If Mercedes and Co as well as Google are able to give us the time in the car back for productivity, it will be a big deal for everybody...