Update:  The code for the sample application and the How To Guide is now published.

Many years ago, when I had to drive to a different city my first order of business was to print out a map from MapQuest. Armed with the map, I could for the most part navigate myself in the new city with not much trouble.  Then came the GPS and the rest is history.  In a similar fashion, last year I wrote a simple application to consume an OData Service using WCF Data Services client library.  The process was not tough.  By adding a service reference to the OData Service, Visual Studio automatically generated client data service classes which are then used to consume the OData Service as objects.  So when I heard SAP was going to create our own Windows SAP Mobile Platform SDK (hereinafter referred to as “SMP SDK” or “SDK”) to consume OData Service, I was naturally curious…

Characteristics of an enterprise application

Let me digress here a little bit.  What makes the GPS a far superior alternative to printed maps?  It’s the fact that you don’t have to spend much time reading the map. The GPS with its voice navigation offers more features – features that make you focus on driving.

SMP SDK ships with 2 separate set of libraries.  One set of libraries target Windows Store applications – specifically Windows 8.1 and Windows Phone 8.1.  The other set of libraries target Windows Desktop applications – any Windows machine running .NET 4.5 or higher.  It is important to understand that the APIs we provide on the 3 platforms (Windows desktop, Windows tablets, Windows Phone 8.1) are all identical. The platform differences are handled inside the libraries, so the developer can call LogonCore or ODataOnline (or any other library) APIs exactly the same way regardless of the targeted Windows platform.  Also, using the Universal Windows app project templates, it is now possible to build applications using a single code base that runs on Windows Phone and Windows.

Update:  The code for the sample application and the How To Guide is now published.  This sample application is not integrated with the SAP Mobile Platform Runtime SP04 and therefore can be run as a stand-alone application.  Please download the code and let me know if you run into any issues. 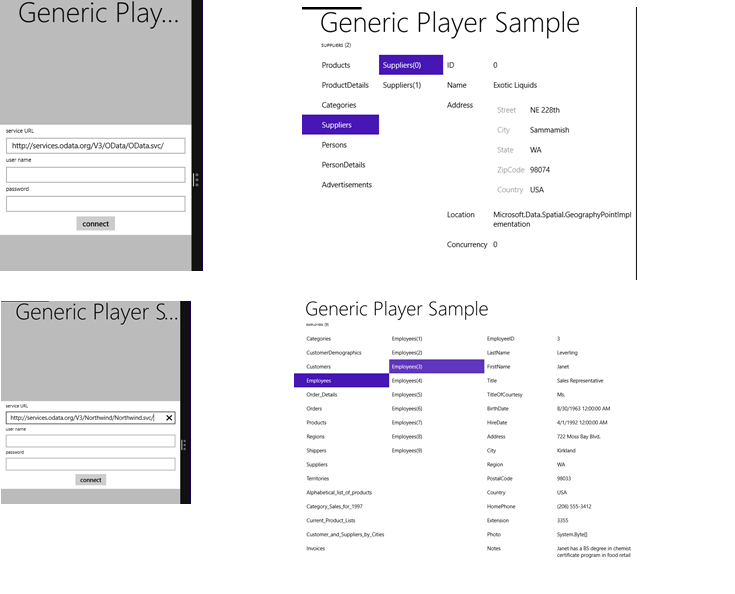 Surprisingly, the footprint of the SDK is less than 250 Kb. The library itself is packaged as NuGet packages.  The .nupkg files contain libraries for both Windows Store and Windows Desktop applications.

As part of the administration capabilities offered by the SAP Mobile Platform, a new device needs to be registered with the SAP Mobile Platform before it can perform any of the CRUD operations against the backend.  This process (hereinafter referred to as “onboarding”) is quite helpful for administration purposes.  There is now a log of the device history and this is quite helpful in troubleshooting purposes.  Also, when it comes to server initiated push notifications, we can target the specific device for any notification.

The process of onboarding a device is fairly straightforward with the new SMP SDK.  Microsoft has simplified the process of making asynchronous calls using the keywords await / async.  The compiler does all the heavy lifting and the end result is code that closely resembles synchronous code.  Upon successful onboarding, an application connection id is created and sent down to the device along with the server response.  This application connection id uniquely identifies the device and must be passed in the header during all further communication with the SMP Server.

To onboard a device, the developer needs to call the following 3 asynchronous methods…

The first method initializes the logonCore variable.  This method takes the “appid” (name of the application in SMP Server) as the parameter.

The third method saves the logonContext variable in the data vault securely using a passcode.   The SMP Server administrator has the option of defining client policies that require passcodes on the device.  This is optional, but highly recommended.

Once onboarding is complete, the next step is to perform any of the CRUD operations against the backend.  In my next blog, I will talk about how to retrieve data from the backend and also how to make changes to the backend data.

is that suport windows phone 6.1 ?

Logon Core Object was crashing after some, do you have any idea  how we can handle that?