SAP kicked off its summer by signing a five-year partnership with Royal Dutch Shell to jointly innovate new technology and products. A video released Wednesday shows how SAP will transition the oil and gas company to SAP HANA in the cloud, which should increase Shell’s business agility.

And increasing agility is no small feat for an organization this big. Shell is a massive group of energy and petrochemicals companies, and it has about 92,000 employees working in more than 70 countries and territories.

“We have to know what is happening everywhere in the world at any given time, and we need to help people … have the information they need at the tip of their fingers,” Shell CFO Simon Henry told SAP TV. “The platform that we have is excellent at doing that.”

Shell is a longtime SAP customer, having deployed SAP ERP applications to support core operations for more than 650 of its companies. Last year, a Shell subsidiary with about 37,000 employees in 36 countries undertook the largest-scale SAP upgrade to date.

More than just a transactional business affiliation, this new partnership is a mutually beneficial relationship aimed at maximizing business value for both parties. An embedded team of SAP experts will work closely with Shell to streamline the company’s IT environment and reduce its total cost of ownership. In addition to SAP Cloud powered by SAP HANA, the partnership will include SAP Predictive Analysis software, SAP Fiori user experience and SAP Screen Personas software.

“The basis of the agreement is getting maximum value for both of our companies,” Shell CIO Alan Matula told SAP TV, adding that the partnership stands on four pillars:

“We’re using HANA to solve problems we’ve never solved before,” Matula said. “All of those things provide flexibility; they provide adaptability, agility and ultimately a new way of running our business.”

Simplify Everything: The Power of Design

Keeping Customer Service Up When the Chips Are Down [VIDEO]

Sell good software and the “Cloud” will sell itself 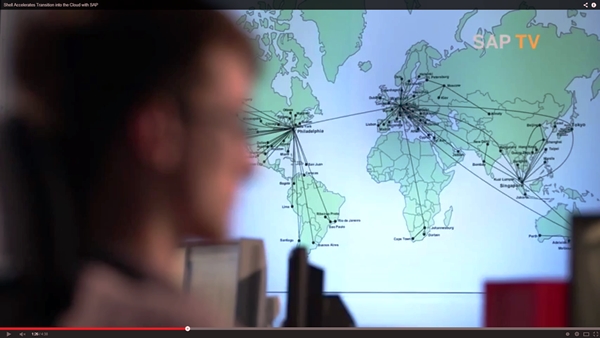