OK Guys! Get your popcorn ready!!!

As a data geek and the proud member of House of Titans (HoT), I love watching TV shows. After finishing one TV show, I always want to know, what’s next. What I also love to do is doing TV-thon.

One of my favourite websites for getting this reference is IMDB. What I then have, are top 25 TV shows based on User Score on IMDB and my top 25 favourite TV shows; the reasons I chose this sample for analysis are:

1. I am only interested to very good TV shows

3. I have some questions in mind in regard to what most of people like and what I like; should I trust them?

First 25 on the left are the best TV shows according to IMDB (highlighted pink); and the second 25 on the right are my favourites (highlighted sky blue). I am not saying that Breaking Bad and Game of Thrones are not my favourites, but they belong to the other side.

I am always intrigued why some TV shows that I love have relatively lower score or not as high as what I expected. What I found out is that I enjoy episodegasm rather than the quality of whole series; means that I tend to value unforgettable episodes or moments higher. Some TV shows might have some dull moments – but as long they have some perfect moments, I tend to love watching them.

For example: Person of Interest; the IMDB User Score is 8.40, which is 43rd according to the sample, but it has some amazingly unforgettable moments – Mean of Top 3 Episodes: 9.80 which come 2nd on the list – it even beats Game of Throne.

Guess what, then I ran an analysis using SPSS 20 to discover correlation between User Score and Mean of Top 3 Episodes.

From the discovery below, User Score and Top 3 Episodes are positively correlated; these variables tend to increase together however the magnitude (strength) is low i.e. 0.297 (0.1< Pearson Correlation <0.3) – from total 50 samples. That means that although there are TV shows which has very high user score, it might not have episodegasm moments.

Now I know why!

Question 2: Do I tend to agree with Commoners or Boring Critics?

I cannot always say that I 100% agree with the rank sorted by Mean of Top 3 Episodes, but yes, I probably prefer it more than what most of users (the commoners) like.  Hence I will use that score representing my preference. Now let’s analyse whether my preference is with the commoners or with the critics.

The critics will be represented by the number of Golden Globe (weighting = 10), Emmy (weighting = 5) and Other Wins (weighting = 1) that those TV shows got. Let’s just add them up.

This the the top 10 according to the Critics.

It says, although both User Score and Critics’ Score have positive correlation with Mean of Top 3 Episodes; they are low ones (0.1< Pearson Correlation <0.3).

But I am more with the Commoners rather than with the Critics.

No wonder many people told me, “Don’t listen to the Critics!”

But what if you consider yourself to be a Golden Globe Grand Jury? You can start with The Sopranos – 5 Golden Globe and bunch of Emmy.

Question 3: But I am interested to what other people watch, then what should I watch?

Isn’t it surprising that the Game of Thrones top the list?

Question 4: You know, very often people like to romanticise things, and they would say, oh, 10 years ago, songs were much better; movies were more awesome, and life was much better. Should I watch old TV shows only?

The answer is No, and you would regret missing many great new TV shows. I guess the best of an era would always be very good. Although 1980s to early 1990s were amazing years; first decade of 2000s were at lower standard although were still very good; past 2 years were actually amazing again. So have some optimism, okay?!? 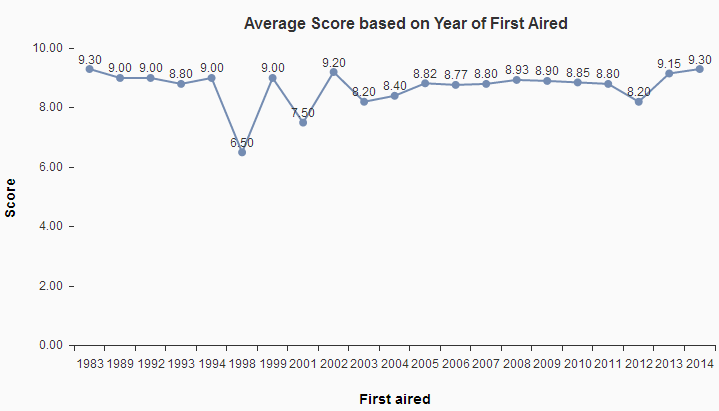 The ultimate question is: collating rank based on four criteria (User Score, #vote, Episodegasm, and Critics), what are the best of all? 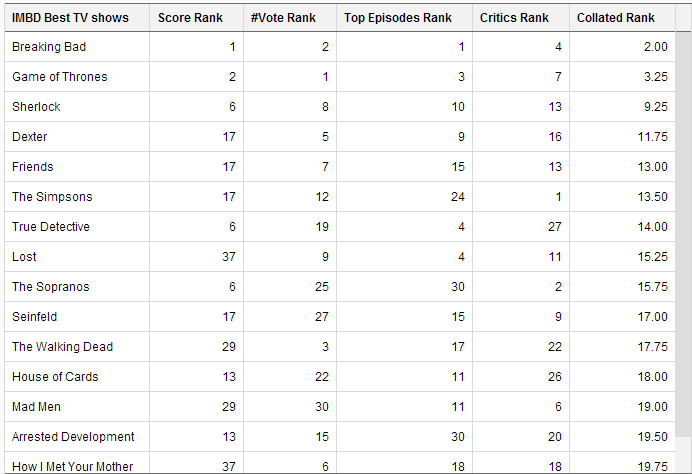 Looking at the list above, I tend to agree, I love the list! Personally I have watched 80% of them, so I still have 20% for my popcorn.

I hope this will give you guys the Most Educated and Informed TV Show Recommendation of all time 🙂 Enjoy !!!