After receiving lot of requests seeking information around Component Based Test Automation (CBTA), I had decided to write a blog post series. This is the first one!

CBTA is a test automation tool present in SAP Solution Manager (SAP SolMan), and the usage right is available for all enterprise support customers. The tool helps in creation of modular test cases which are made of components. The user can record a transaction or a SAP web application as a normal business user, subsequently, CBTA would create a modular test in SAP Solution Manager. 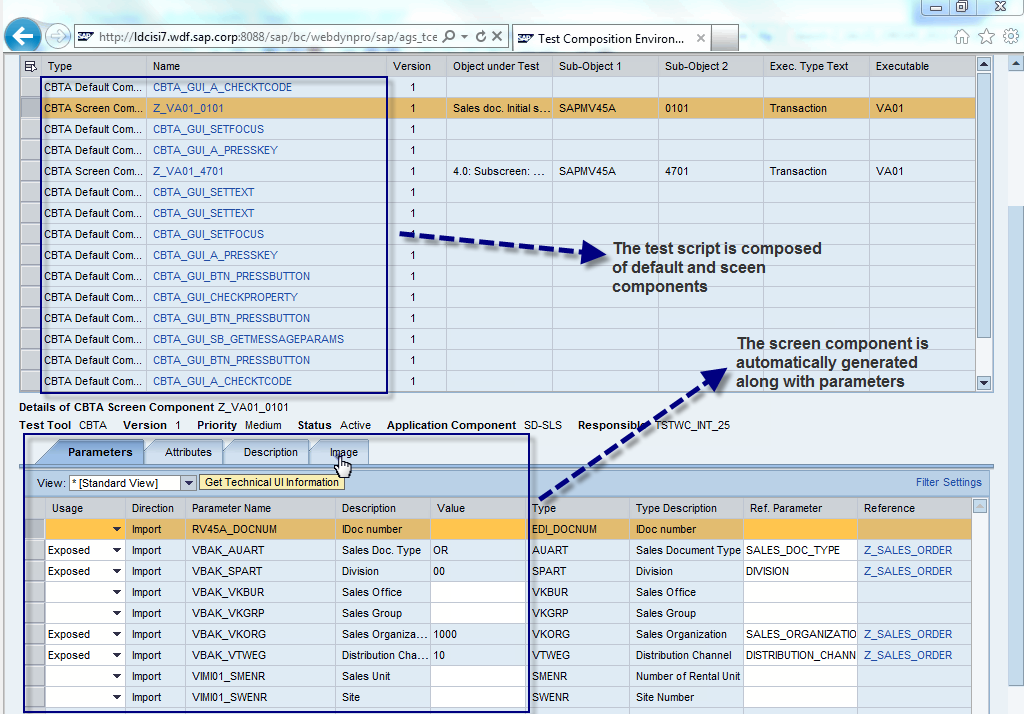 The CBTA generated tests would have the following:

The CBTA generated test scripts can be seen in an environment called Test Composition Environment (TCE). TCE provides powerful environment not only to trigger test script creation, but makes edit of the test script easier in the following manner:

CBTA was launched in 2012 in SAP SolMan 7.1 SP07, and it was supporting following UI technologies:

With SAP SolMan 7.1 SP10, CBTA started supporting automation of the following UI technologies over and above the ones already mentioned before:

The above mentioned information can be simply put in the following table:

The component used by CBTA has following parameters which are classified in the following:

The parameters are also classified on the basis of usage:

Generally, a suitable Export parameter is exposed, so that end-to-end test can be created.

In the next post, I will explain several of ways of executing a single CBTA test and passing of multiple data iterations via a Test Data Container.

1. How to use String function in CBTA

How CBTA is different from QTP (which also comes in integration with Solman) ?

Can you elaborate the benefits of one over another.

We have to go for one tool, which one we should go for and why?

HP UFT/QTP  is quite mature tool and it would take some time for CBTA to attain the same level.

Another clear advantage of using CBTA over QTP is the cost factor. You should decide automation tool depending on the AUT. If the applications are only SAP based then you can use CBTA but if you are planning to automate some third party applications along with ERP such as web services then I would recommend HP UFT.

I have few questions related to CBTA tool.

2. How to attach a step in the middle of existing CBTA test scripts. ( Ex: Similar to SAPGUI ( Attach ) command in eCATT ).

Can you elaborate each answers in detail.

2. this is not available yet, but planned for one of the future releases.

4. and 5. Information is available in this document:

Can you tell me what is the latest on CBTA - I tried looking up TECH'ED 2015 blogs but could not find anything on this .

In TechEd 2015 , there was topic on BPCA with respect to CBTA. Apart from that there were no sessions related to CBTA this time. In last year TECH-ED's , there were few sessions on CBTA.

I see. ok thanks for the info.

I have some questions on CBTA.