This is my first official foray into the Land of Lumira and the DataGeek III Challenge! I have accepted the challenge and declare my allegiance to the House of Titans!!!  From a social standpoint I am sure there many other worthwhile focus points but hey I like American Football so House of Titans it is! 🙂

For my Analysis I will be looking at the popular mythology of the National Football League that the players are getting Bigger, Stronger, and Faster.  Essentially Super Human Titans out there running around causing havoc in all things on the field and unfortunately far too often lately off the field.  Our analysis will of course stay strictly on the field or if you are of the old country variety you may call it the pitch.

As the title and this write up notes we will focus on proving or not that NFL Players are getting Bigger, Stronger, Faster!!! I am not a data scientist by trade so hang on tight and if you get bored make sure you listen to Kanye West’s song Stronger as I have done for inspiration as I wrote this Blog.

For our Data I utilized the wealth of NFL Combine data available from http://nflcombineresults.com and scraped together a dataset in MS Excel with all available combine data from 1999 – 2014 for our analysis.  This definitely gets us part of the way there as the NFL Combine is the NFL’s yearly job fair and provides a standard baseline on testing for a number of combine events like the 40 yard dash, the Bench Press, and of course Weight check to help us analyze our hypothesis.  Unfortunately this data will not inform us on what happens to players after they get into the league but it should show us a whole as they enter the league are our players and the training methods, genetics, and results which drive them pushing the bar on Bigger, Stronger, Faster.

Our first look at this is a simple bar / line chart combo looking at Bench Press, Height, and Weight from 1999 through 2014.  On first pop it doesn’t appear in aggregate the players are getting stronger, taller or heavier.  We maintain pretty much even trends across the board during our 15 year window.

But we can at least slide and dice this a bit deeper and while we won’t get too deep into the weeds if we parse it out on a positional basis we can see some distinct trends in certain areas.  Carve out below of just the Outside Linebacker results and clearly some significant strength changes here as from 1999 we have an average of 18.92 bench presses and in 2014 up to a whopping average of 22.26 on the bench.  I will let smarter people than I do the math on how significant that is but clearly an increase in focus for OLB’s on the strength end.  This could also reflect some positional bias as the position has evolved over the years as well as improvements or focus on strength profiles for that position.

For our next analysis let’s look at a related look at Bench Press average and Weight specifically for the Big Ugly’s! IE Offensive linemen and in this case a filter on Center, Guard, and Tackle.  These boys are big like trucks but honestly they aren’t getting too much bigger over the years as averaged 314 in 1999 and 313 in 2014 with no real appreciable difference.  If anything they may be getting a smidge more svelt over the years but nothing that looks too statistically significant. 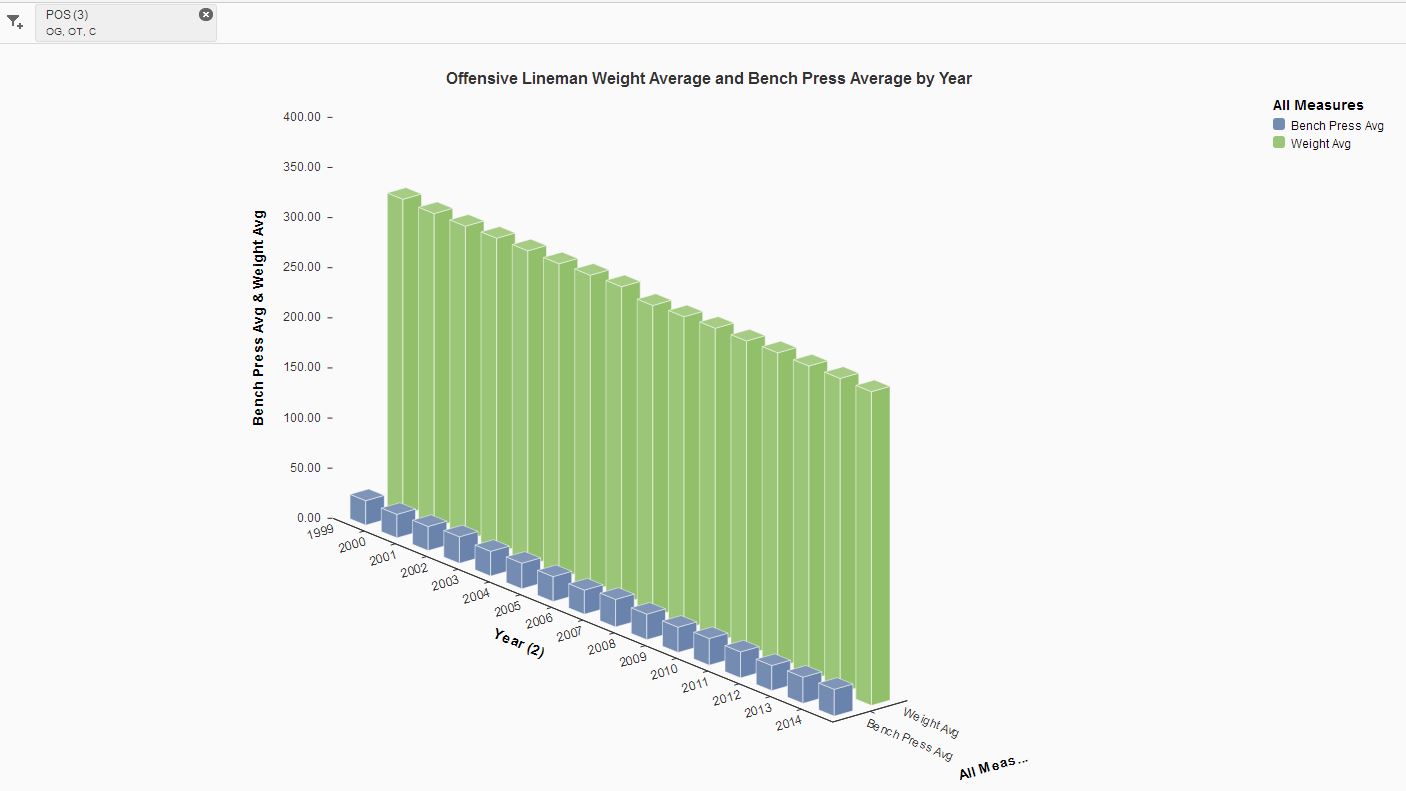 The Bigger / Stronger Wrap Up

At least in terms of high level analysis since 1999 it doesn’t appear we have too much change in the Size / Strength of our NFL protégés in aggregate.  At the positional level we have some definite evolution in some areas like Outside Linebacker where strength is definitely on an up trend but that is equally offset by a loss of strength in other areas of the playing field like Cornerbacks and Wide Receivers who don’t seem to put nearly as much focus in those areas as they used to do.

Note: I did not include its own dataviz but was also surprised to see that in total the Wide Receiver and Tight End splits on Height and Weight are virtually unchanged from 1999 til today.  So the evolution of the position to include those of a more basketball level physique like the Calvin Johnson, Tony Gonzalez, Antonio Gates, and Brandon Marshall’s of the world is a bit overblown.  There are some big guys today but with the monsters like Harold Carmichael of 6’7″ Eagles fame from yesteryear it really hasn’t changed much on a data level.

We are now onto the Speed segment of our programming so let’s do some DataViz goodness and look at the evolution of Speed since 1999 and check out if our favorite protégés are getting any faster!!! We will keep focus on this primarily at what are considered the Speed positions of Running Back, Wide Receiver, and Cornerback.

Here we have some Boxplot goodness to look at the Forty Yard dash times for RB, WR, and CB.  Definitely some outliers but when you look at it in total we don’t seem to be getting any faster either overall.  We had a median 40 score of 4.57 in 1999 and 4.52 in 2014.  I won’t try to fool you again with my knowledge of statistical significance but at a lay persons level we don’t seem to be getting much faster either.

Now let’s move onto that bastion of Runningback success predictor the SpeedScore.  As popularized by Bill Barnwell of Football Outsiders and Grantland Fame – excellent podcasts on Grantland so well worth the time in the car or on the treadmill.  SpeedScore is a combined look at FortyYard Dash and Weight in combination under the premise that if you are larger and run faster that is better! The SpeedScore has been a decent predictor of NFL Success at Runningback in the recent past.  But of course we are still waiting to see how it pans out for some ( Knile Davis of the Kansas City Chiefs and 2013 NFL Combine SpeedScore Winner you are now on the clock!!! ).

Here we have something interesting as we definitely seem to be trending up in SpeedScore!!! With our median score from 1999 at 94.6 to our 2014 median score of 99.6.  Some up and down but we definitely seem to be trending up and clearly focusing in the RB arena on that elusive combination of both size and speed.  Eat your Wheaties boys and practice those wind sprints if you want to be starting on Sundays in the NFL.  Of course even if you are starting with the current emphasis on passing and the disposability of Running Backs in general the pay for performance and longevity just aren’t there.  But that is a deeper conversation for another day.

The Faster Wrap Up

While we clearly need to dig into the data more it does seem that in total the players aside from freak outliers are not getting any faster than they work back in the days of Primetime.  But as noted in our SpeedScore evolution we are trending in the faster and bigger direction so clearly positional focus on getting both faster and stronger Running Backs into the mix.  Thank you Bill Barnwell for the excellent SpeedScore metric and you continue to have a Podcast fan in me!

In total across the board while we do have some positional variance we don’t seem to be getting any Bigger, Stronger, Faster as a whole.  There are more questions to dig into on this but to me we appear to be topping out physically in terms of what our bodies can organically support even with the space age training methods of today, HGH, steroids, amphetamines and who knows what else.  We don’t have at our disposal Body Mass Index numbers and other deeper level items to assess the individual profiles further but outside of the outliers any trending on this seems well contained.

Where have you been Voz!

Based on your SpeedScore trends for the defined time period, my concern is that the league peaked back in 2010 and we're seeing a worrying downward trend.  One would suspect a positive correlation between this metric and a player's durability/longevity.

Way to bring it all together Vozella!

Thanks Rapp$tar! I would say it is the infamous Trent Richardson Effect but he had a SpeedScore of 113.  So who knows what happened to the poor guy!!!