Whether you’re brand new to SCN or have been active here for a while already, you’re probably aware that the community is a great place to build reputation and earn recognition for expertise in SAP-related topics. SCN has a long-standing Reputation Program devoted to continually improving how topic expertise is acquired and showcased in the community.

An important part of that Reputation Program is the annual SCN Topic Leader contest. The contest is designed to highlight the most active experts in certain topics in the community. In past contest years, we’ve recognized top contributors in points categories and then topic spaces, we’ve listed their names in a blog, and sent them a certificate of achievement.  In some cases, when the opportunity arose at SAP TechEd && d-code, SCN Topic Leaders attending the event were acknowledged on stage. 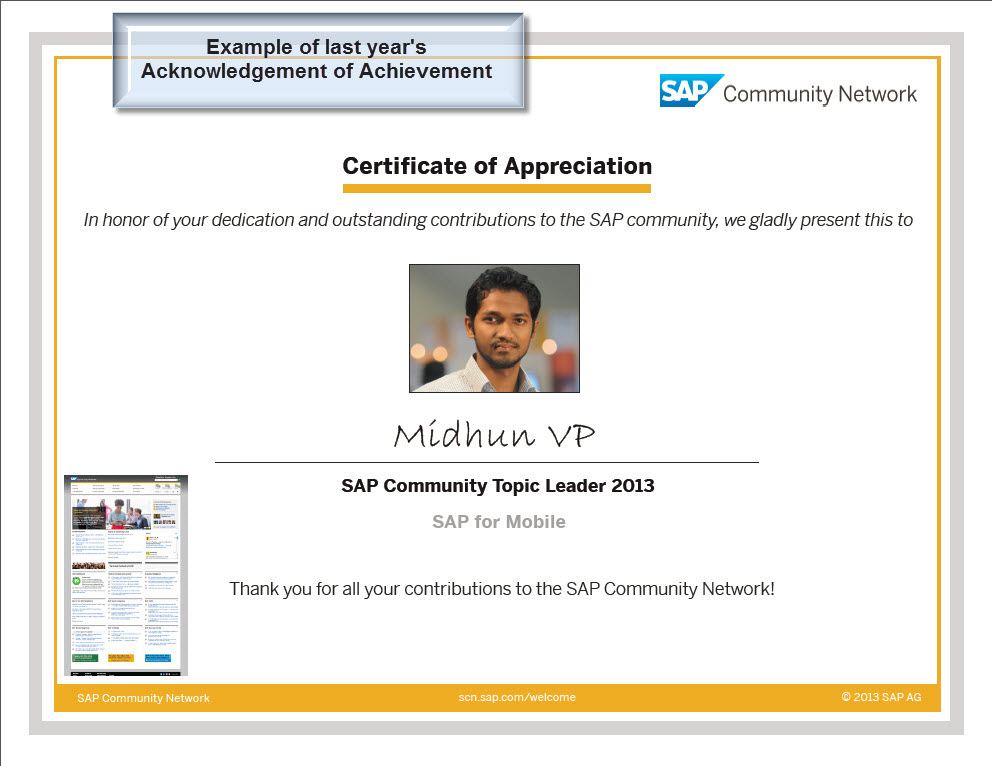 Over the years, the contest has undergone changes as the community has changed, and this year we are making a few adjustments again.

In the 2012/2013 contest, as a way to keep the Topic Leaders list meaningful in light of the large number of topic spaces on SCN, we introduced a point threshold. That is, in addition to being one of the top three members in a topic space in terms of points earned in that space in 12 months, you had to get a certain minimum number of points in that space in the contest period to qualify as a Topic Leader.

This year we are continuing with that concept, but the point threshold has been adjusted—it is now set at 500 points.

The table below summarizes the changes to the Topic Leader contest this year:

Members whose point level is below the threshold in a topic will not be considered for recognition as Topic Leader. However, Topic Leader recognition is only one way that we recognize member achievement. Your contributions and engagement will still be recognized through earning missions and badges, and if you are among the top 10 members in a space points-wise in the past 12 months, your name will appear in the leaderboard for that space. These forms of recognition continue to be available year-round and are not tied to a particular contest period.

In less techie terms: to qualify as a Topic Leader in a space, you must have earned more than 500 points in that space between August 1, 2013 and July 31, 2014, AND you must be one of the top 3 contributors in that topic space. (Note: points in sub-spaces do not roll up into their parent space. Each space is considered a separate entity.)

I look forward to sharing the list of Topic Leaders with you, and as always, we are interested in your feedback on the Reputation Program and the Topic Leader contest!