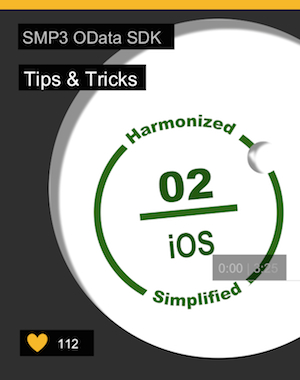 Let’s start with the “store” object.

Store (or more precisely, “ODataStore”) is the common interface and acts as a central access point of the OData service.

In a formal description,

The ODataStore is covering exactly one OData service (service document and metadata). It shall be possible for an application to create multiple ODataStores (also in combination on- and offline) at the same time, which shall be completely independent from the API perspective and have own life cycles.

So in a nutshell, you have to create the store object in order to CRUD the OData. How do we do it?

Note: I’ll talk about how we create for offline store in later blogs, as the online store is simpler than offline and easier to understand as a first step.

You see the first method name initWithURL:, which is the OData Endpoint URL in SMP server. SMP works as the OData content proxy so once the app gets onboarded to SMP server, SMP should know which URL you need to use. (I’ll also cover the onboarding APIs in another blog)

The second method httpConversationManager: is another interesting new object from the new SDK. While onboarding, we create the HttpConverstationManager, which hides the complexities of HTTP communication – such as headers and credentials.

Okie now we can open the store. Invoke openStoreWithError: and either

Will be called back.

Im following your blogs to create an iOS application for my learning.

I have few questions on Online and Offline Store.

- I assume that store is nothing but a database. am I correct?

- Are there 2 versions of databases (online store and offline store) available on local device?

- I need do CRUD (Create, Remove, Update and Delete) operation on Offline store when device not connected to internet. is it correct?

Would be great help if you answer my questions. Thanks in advance.

Sorry for being late. I had been working on H2G upload for you 🙂 You can find loads of H2Gs to accelerate your learning curve - find the links here.

And I don't forget to answer your good questions.

A1. The offline data persisted on the client device is ultimately stored in a database.  But there is a lot of work happening between the application and the database to map OData requests down to the SQL.  It can really be considered as a full OData Producer running on the device whose data store is the ultralite database.