When Vasco da Gama, the 15th century Portuguese explorer, landed in Kenya searching for a sea route from Europe to India, he found Chinese traders who  had arrived in Malindi earlier that century following a series of expeditions sponsored by the Ming dynasty.

Today, five centuries later, as Western companies wake up to the enormous opportunities that Africa and its 1bn population – the youngest in the world – presents, they are once again discovering that China has paved the way. Backed by Chinese government loans to African countries from, Chinese companies and an estimated 1m plus Chinese workers have poured into Africa over the past decade, mostly in search of the raw materials to feed China’s voracious domestic economy.

Between 2001 and 2010, China’s Export-Import Bank extended $62.7bn in loans to African countries, or $12.5bn more than the World Bank. Over the same period, trade between Africa and China grew by more than 700 per cent with China replacing the US as Africa’s biggest trading partner in 2009. 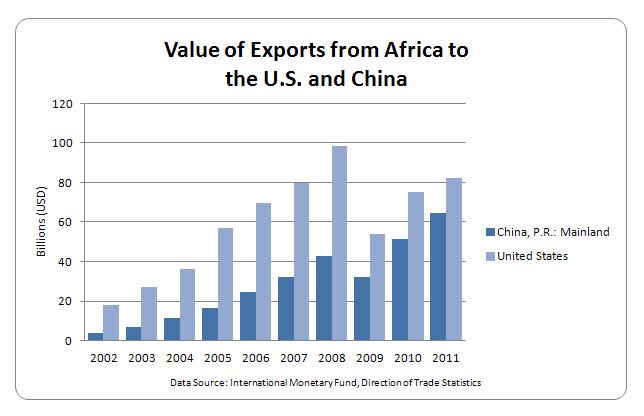 While some commentators have questioned China’s motivation for its interest in Africa, others argue that the Chinese appear to be primarily driven by commercial considerations and, by extension, that western companies could lose out unless they embrace Africa, described by many as ‘the last great frontier.’

In his recently published book ‘China’s Second Continent: How a Million Migrants Are Building a New Empire in Africa,’ Howard French, a New York Times journalist with extensive experience in both China and Africa,  argues that the mass immigration of Chinese people into Africa is almost entirely driven by money rather than ideology. Deborah Brautigam, a Washington –based academic , makes much the same point while debunking other widely held beliefs  in her blog China in Africa: The Real Story.

What is beyond doubt is that by modernizing Africa’s crumbling colonial infrastructure, the Chinese and a few pioneering Western companies have set the stage for Africa to help power the next phase of global economic growth. Economic growth in sub-Saharan Africa this year is expected to be slightly higher than in 2013 at around 6 per cent, according to the International Monetary Fund. Africa as a whole already has a collective gross domestic product of more than $2,000 bn and is home to seven of the world’s fastest growing economies.

As in other developing regions, many Western companies, like their modern-day Chinese counterparts,  originally set up in Africa to exploit the continent’s abundant natural resources. Now however,  a growing number including those in the financial services industry, manufacturing and communications and IT are recognizing that the African market itself – particularly the consumer market – represents a largely untapped opportunity.

It is no coincidence that M-Pesa, perhaps the most successful mobile payments system in the world, took root in Kenya where it has transformed the lives of

M-Pesa’s success also highlights another important  attribute of Africa (and to a lesser extent, Latin America.) Because Africa is starting nearly from scratch, it has the opportunity to ‘leapfrog’ generations of older ‘legacy’ technology and move straight to more efficient, flexible business models including mobile, data driven and cloud-based models free of the constraints that on-premise systems often impose. For those companies, foreign and domestic, that seize this opportunity the rewards could be substantial. “We believe the opportunity is now,” said Pfungwa Serima, CEO of SAP Africa last month when the company announced plans to invest $500m in Africa over the next six years aimed at accelerating growth in Africa.

Why now?  SAP Executive Board member Robert Enslin explained that although SAP has been in Africa since the early 1990s:”We couldn’t do it before because the technology was not fast enough or simple enough.”

Today, that no longer true. Africa and its youthful population – 60 per cent of the population is 25 years old or younger – have adopted technology, including mobile communications, faster that anyone thought possible. According to a 2011 Standard Bank report , the number of mobile phone subscribers in Africa  increased from 15m in 2000 to more than 500m by 2010 and estimates suggest that number could top 800m by 2015. Oil-rich Nigeria is already the world’s tenth largest mobile market.

Meanwhile, the switch to cloud computing  lowers the entry cost to the digital economy not just for large companies, but also for the small and medium sized companies  that are emerging as the main growth drivers in Africa and elsewhere. Together with real time analytics, this will enable them to respond faster to new opportunities and shifts in consumer demand with new products and services.

Over time, IT should also improve transparency and help governments and other agencies respond more quickly to rapidly changing demands.  For example, the recent Ebola outbreak in West Africa has focusing a spotlight on a unique online tool run by experts in Boston that flagged a “mystery hemorrhagic fever” in forested areas of southeastern Guinea nine days before the World Health Organization formally announced the epidemic.

(HealthMap,  an innovative tool that uses algorithms to scour tens of thousands of social media sites, local news sources, government websites, and other sources to detect and track disease outbreaks. )

Ultimately I believe that as ‘the Lost Continent’ begins its economic transformation it, it needs access to the latest technology tools; but more importantly the people of Africa deserve a better life and the world needs a vibrant, fast growing and healthy Africa.

Fifteenth century explorers from China and then Europe helped put Africa on the map – literally. Now, as Pfungwa Serima notes, their later day counterparts have an opportunity to help Africa and its people reach their new goal of ‘ubunto’ – the concept of promoting humanism and sharing for the betterment of all.