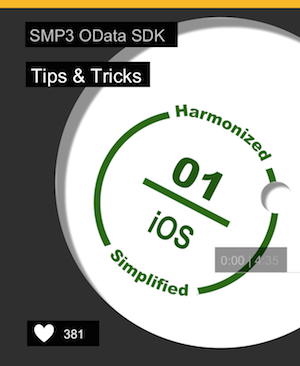 Thanks for stopping by, and please let me commence the new blog series “SMP3 OData SDK – Tips & Tricks”.

As you might already know, sets of SMP3 SP4 and OData SDK SP5 have been released. This blog series would like to help you understand better about the new SDK, also internally known as “Harmonized SDK”.

The name “Harmonized” came from the concept that the developers can use the very similar APIs across different platforms – iOS, Android, Windows, and Cordova-based Kapsel – and they run on either on-premise version or HANA Cloud Platform Mobile Services. We have different programming languages but ideally we want to use the very similar APIs – hence the name of “Harmonized”.

This blog will focus on iOS (just because I’ve been working on recently) but other platform should have very similar APIs.

Another cool update is the APIs have been “Simplified”. I’m planning to discuss the details as “Tips & Tricks” in upcoming blogs.

I had tried to count the line numbers of code – a quick and dirty way to gain a rough idea that how much we can shrink down the logic with the new API, comparing with the old one. According to my quick measurement, the total sum of the DataController and ViewControllers in the same iOS app functionality:

The upcoming blogs will introduce you to the practical tips and tricks!

Ken good one. Looking forward to the blogs...

Good question. Yes it is in SMP SP4. It is documented here.

thanks a lot for this wonderful series

where can I find Flight_iOS sample app to download ?

Thanks I found it on github :