How to recover quick views, when Usergroups have been recreated

From some for us yet unknown reason, suddenly, all the quick views (SQVI) from one of our productive system disappeared. Hundreds of quick views (3400 in total). 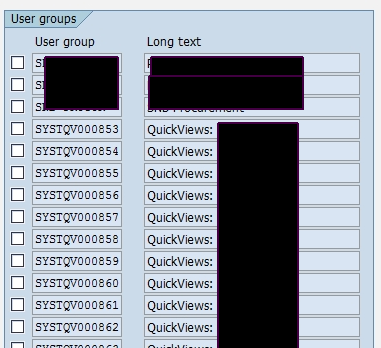 What we could get in the first moment, at least, was a list of reports (table TRDIR), that were generated out of all the quick views:

By searching the table AQLQCAT (Query Catalog) for the query name (right side of the program name from the 17th character), we could find the name of the Infoset:

We went to SQ03 to check, whether the Infoset is still known to the system, and whether we could re-assign the abandoned Infoset (authorization) to the new QV Usergroup of the given user:

Apparently it was possible :-):

Still the quick view did not appear for the user in SQVI.

After a bit of testing we found a way: to copy the query from the old user group into the new one.

First in the SQ01 we selected the new user’s Usergroup: How to find and execute or work with other users quick views (or quick views created with old user-id)?

Then in the menu select Query => Copy. Here we put the old usergroup and the query name twice: 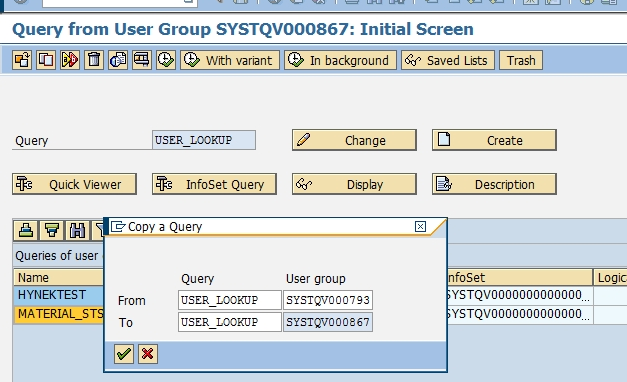 After the copy, the query appeared again in the SQVI: