Data manager packages are used to upload master and transaction data into BPC system,  in BPC 10.0 version,  the prompts or parameter values have been changed to fulfil different needs of data upload. In this document, we will understand the functionality of BPC 10.0 Data manager Packages and how it is different from BPC 7.5.

Sreekanth is an SAP BI  and BPC Consultant in Accenture Canada,  he has done BI implementations for various Clients in North America. Currently he is working on BPC development and upgrade projects.

BPC Administrator uses several DM packages to run the data uploads to Planning models an Dimensions,  it is very important to understand how each option works when you are triggering them,  SAP help information is all accross on this topic but not consolidated, So I thought of keeping every thing at one place.

The common Data manager packages used in BPC are

All of them are explained below,

This DM package is used to load transaction or master data from flat into BPC model. Once the file is updated to BPC server,  we start uploading to BPC objects. Let us see what options we have while executing this,

First prompt is,  Import file.  The flat file which needs to be imported will be selected, – Not changed from BPC 7.5 version.

Overwrite Option: It overwrites the existing record with new record,  Technical Characteristics do not come into considering while looking for the matching key.  Matching key is all the dimension values from source and target. For example, if the applciation has the record as below,

if the new record from flat file is having as below,

-150$ is made up of -200$ before image 50$ after image, total it is -150$    Overwrite means technically it does not overwrite the existing record in the model, as it does in BW DSO. It posts a negative to existing record first and then gets the new record. Because model is technically a BW Cube, it is always adding records.

Replace data:It is more of deleting the existing records where Category, Entity and Time dimension matches. It does not look all the characteristics into consideration while deleting it. For example, if we have a record with Account time and WBS element(entity) Char as above,

Your newly updating record is as below,

What happens in this case,  it deletes the current record first though the new record has a different account number but does not care it delets entire record because it only look time Dimension and Entiry Dimension which are same in this example.  Then load the new record to Cube, it will be

What is different from BPC 7.5,In BPC 7.5,  you will see update mode screen with different prompt descriptions,

With the ENVIRONMENTSHELL activation in during BPC 10.0 upgrade, the above prompts are changed to BPC 10.0 prompts,

But technically, there is no difference between the options

So after upgrading the system, you will use the corresponding prompt options without further changes.Prompt 4,  Selection of Aggregation type,  Pre aggregate or take a last record. This is new prompt setting appears only in BPC 10.0, below is screen shot,

if you choose, Pre aggregate,  records with same key are summed up for the amount values,  other case, last record is chosen, then last record value is taken into consideration for uploading. The next prompts on this package have no change in the latest version.

This is used to upload data from SAP BW infoprovider to BPC model,  most of the prompts work as they are for flat file package discussed above except the below one. The update mode of this DM package has an additional parameter now,  that is ‘Append’. 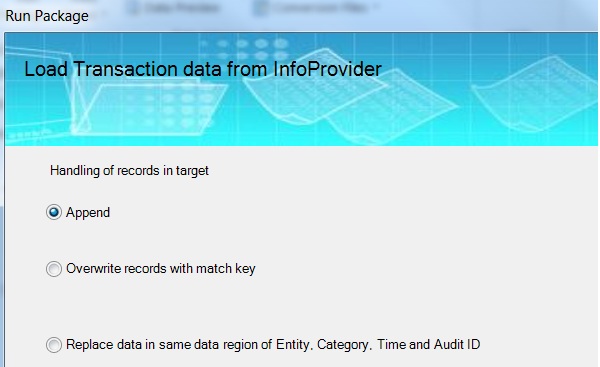 With this option all source records are just appened to Model, it does not look the characterstic combination is already available in BPC or not. When you migrate System to BPC 10.0,   this DM package selects ‘APPEND’ option by default, you need to change to either Overwrite or Replace according to your BPC 7.5 option. It is a manual step during upgrade. 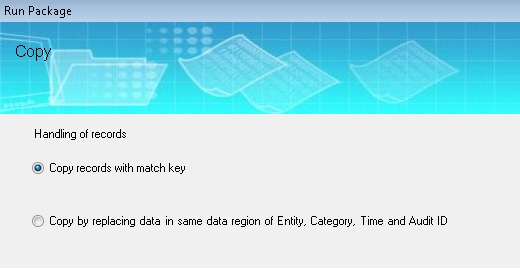 With mach key option, the target selection records overwrites the existing records in the model, if there is a record already and matches.For example: If model has already the following records,

If we run a copy function to copy the value  ACTUAL to FORECAST,   in the target,

Move DM package also works in similar way,  the difference between COPY and MOVE is,  MOVE will delete the source record which is

getting moved to target.

This DM package is used to load the master data attributes to BPC Dimension,  the prompts have no change in BPC 10.0  but few points to take care while running the package.

More information on this DM package is explained the SAP document,

Purpose of this package is to update the parent nodes in the hierarchy, This package also does not have any change in the functionality of BPC 10.0

This is also explained with different scenarios in the following document

Purpose of this DM package is to convert the currencies,  With BPC 10.0 Upgrade, GROUP_ID Dimension has become part of DM pacakge prompts, so if we are not using the GROUP_ID then you will have to replace that with Category Dimension,

Note: CLEAR,  Light Optimize, Open/Close DM packages do not have any changes to their prompts and functionalities. They exactly work as in BPC 7.5.