What If The Scots Really Do It? Managing Supply Chain Risk

In this recent article Will Scotland Be Brave, the Supply Management website asks what impact would a potential ‘Yes’ vote in the referendum on Scottish independence have on procurement professionals. The polls have been favouring a No vote for years, but suddenly with only 10 days left it is neck-and-neck. What seemed unthinkable just a month ago might really happen.

For Supply Chain Professionals this is a Risk Management process, albeit with a Risk that is just about unique. The exact details of the impact of a Yes vote are not known but could likely impact the currency, tariffs and even the business continuity of some of your suppliers.

As with most risk plans, you should develop a simple red/yellow/green impact on suppliers, ranked by order of importance. For suppliers of high importance which are red (high risk) develop contingency plans such as developing an alternative source of supply. Don’t forget to include suppliers’ suppl 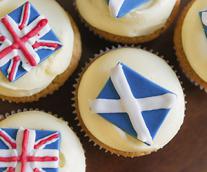 iers as explained in this article Keep Your Suppliers Close – And Their Suppliers Closer. For new contracts with suppliers between a yes vote and eventual independence (likely mid 2016) consult your legal team regarding what clauses should be inserted regarding currency, tax and regulations.

Remember all those Y2K consultants from 1999? They will be back as Separation Consultants.

And if (what’s left of) the UK also goes ahead with a Referendum on leaving the EU, you get to do it all again.

I hope that on Sep 19th I can go back and change this heading to “What if the Scots had done it”. A close No vote is still the most likely outcome, there are huge social pressures to vote Yes, and this may be reflected in the polls. What seems to be anti-English sentiment is actually anti-Westminster (and anti-politics in general), and this feeling is common right now in other democracies such as France and America. No need to rip up a country just because you don’t like the current crop of politicians.

My personal view? I’m a Unionist and as in a troubled marriage I have not really examined the bonds of my affection until the suitcases were packed and by the door. Together we have launched democracies, started the Industrial Revolution and repelled dictators. Please, don’t leave us.

Thanks to Birgitte Steen, Heriot Watt University graduate for contributions to this blog. Photo credit iStock.

Great post James. In my view, this is THE news story to follow. The impact of a "yes" vote will likely cascade across supply chains.