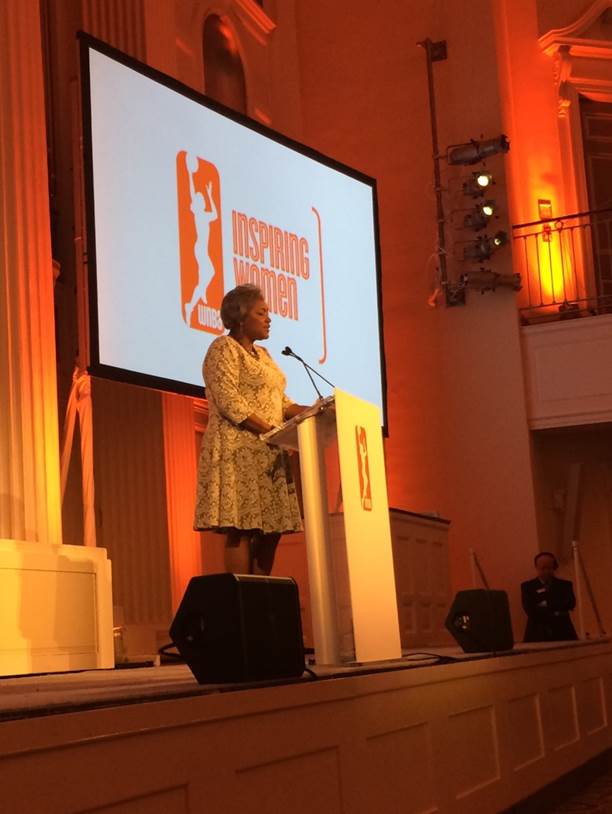 The gender gap is one of technology’s most deep-rooted challenges. Only three percent of tech start-ups are founded by women. The percentage of female computer science majors peaked 30 years ago – five years before I was born. Although women make up more than half of the workforce, they hold just 25 percent of jobs in tech and computing. In response to recent pressure, major companies like Apple, Twitter, and Google have disclosed their diversity statistics amid tepid acknowledgments that the results are disappointing. “We have a long way to go,” admits Sheryl Sandberg of Facebook.

But we’re on the right track, as I was reminded at last week’s WNBA Inspiring Women Luncheon. The even honored the many groundbreaking female leaders who work tirelessly to create opportunities for women in technology, sports, politics, and beyond. These women are truly shattering glass ceilings—as well as glass backboards, joked WNBA President Laurel L. Richie.

The event’s honorees included WNBA greats – including Hall of Fame coach Lin Dunn and Becky Hammon, the first full-time and paid assistant female coach in NBA history – as well as female leaders from other sectors. The WNBA Inspiration Award was given to political strategist Donna Brazile, the first African-American to manage a presidential campaign and current adjunct professor, author, commentator, and Vice Chair of Voter Registration and Participation at the Democratic National Committee. Her passion to get young people to vote and strengthen the political system from within aligns perfectly with the WNBA’s commitment to work, community, and female empowerment.

“We’re not looking to replace any man,” Brazile told the audience. “We’re just asking you to scoot over and make room.”

Still, the tech sector is one area where men seem particularly slow to scoot. Reshma Saujani, founder and CEO of Girls Who Code, shared her mission of reaching gender parity in computer science. Women today represent 12 percent of all computer science graduates, while in 1984 they represented 37 percent. Girls Who Code aims to reverse the trend by exposing young women to computer science and engineering, sparking passion from a young age. According to Saujani, her organization “is more than just a program. It’s a movement.” (SAP has funded Girls Who Code in the past.)

This key to this movement is showing girls that technology doesn’t have to be a “boy” thing. Business, politics, and athletics all benefit from the diversity of opinion that comes from equal gender representation. And amid the public debate about how to fix tech’s gender gap, some changes have been made. Most tech companies (including SAP) have made commitments to gender diversity, President Obama recently appointed the first female CTO of the United States, and recent studies have found that there is no gender gap in tech salaries.

The future seems bright. Even among the incredibly impressive honorees at the luncheon, the star attendee may have been Mo’ne Davis, the first girl to earn a win and pitch a shutout in Little League World Series history – bringing new meaning to the phrase “throwing like a girl.”

SAP was a gold sponsor of the event and powers wnba.com/statistics.

Do you want to learn more about diversity and how it’s changing the Future of Work? Get the latest curated content here.

Great event and story coverage!  Funny how a little inspiration can motivate you to do something more  🙂