A Cure for Clickbait May Be Simpler Than You Think

Clickbait can be deceptive and irritating, and we all seem to agree that we don’t like it. But that’s where we part ways.

And that’s because we’re seldom talking about the same thing. Some people see clickbait as blogging content that is upsetting or suspicious, while others count it as any headline they might find appealing.

But we’re talking about “an eye-catching link on a Web site that encourages people to read on,” according to Urban Dictionary. “It is often paid for by the advertiser, or generates income based on the number of clicks.”

Clickbait is really one of those sensational links that promise insight into a miracle cure, get-rich-quick scheme, nonsensical list, etc. — but the content rarely delivers. It’s not so much the appealing headline that frustrates the reader; it’s the lack of substance behind it.

And I doubt that many readers click on unappealing headlines.

The Real Case Against Clickbait

“There’s no singular way to craft clickbait, but the essence is clear,” The Daily Beast noted last month. “Lure — no trick — readers to your site.”

A recent clickbait-related dustup on the SCN centered around a blog post on SAP Business Trends titled “Does the headline match the story? The case against clickbait.” Whether intentionally ironic or not, the headline in this case did not match the story — nor did the comments from community members who felt they’d been tricked.

“Some [clickbait] is disingenuous,” Jake Beckman of Twitter-based clickbait spoiler @SavedYouAClick said in The Daily Beast. “It’s not always, but the reader is always being manipulated.”

That’s a big reason that I advise against clickbait in the blogging training that I conduct for SAP employees, contractors and interns. An honest reputation is one of the most valuable things you can cultivate when building your online brand.

And when you swindle your readers, they’ll stop clicking on your content.

“The incentives for even the most respected news agencies to rely on clickbait are obvious: traffic,” The Daily Beast stated. “But as the increasing backlash against clickbait shows, the short-term gains in unique views may cost news sites in the long run.”

The Lighter Side of Backlash

“Which do you think is more important,” satire juggernaut The Onion posited last year in its list 10 Reasons Falling For Shameless Click Bait Makes You A Bad Mother, “a list of the world’s prettiest beaches, or the needs of your kids, you uncaring monster?”

Not stopping there, The Onion in June launched ClickHole, a site dedicated to lampooning the usual clickbait suspects, such as Upworthy and Buzzfeed. ClickHole features parody quizzes, such as “Can You Match The Music Festival-Goer To Where They Eventually Passed Out?,” articles, such as “Whoa: This Third Grader Has $100,” and — of course — lists, such as “7 Other Gods Who Have Forsaken You.”

In a more practical backlash, Facebook altered a ranking algorithm last month to stem the tide of clickbait, which the company said could “drown out content from friends and pages that people really care about.” The move followed a survey that found 80 percent of Facebook users favored headlines that linked to content they actually wanted to read.

“Facebook, which has 829 million daily active users worldwide, has the power to make or break some sites with such seemingly minor changes,” The New York Times noted. “A previous switch in its algorithm dried up traffic to some so-called viral sites, which specialize in lists, and in online memes.”

The Cure for Clickbait

“It’s no longer the case that a few powerful elites control all the media, and the rest of us are just passive receivers,” political commentator Sally Kohn said in a TED Talk published late last month. “We are the new editors — we decide what gets attention based on what we give our attention to.”

We give that attention via clicks, and algorithms, such as the ones Facebook has employed, look at our previous clicks to determine what they will show us next. So if we continue to take the clickbait, clickbait is what we’ll continue to see — because we’ve collectively incentivized others to create and peddle it.

“If you don’t like the 24/7, all-Kardashian, all-the-time programming, you’ve got to stop clicking on the stories about Kim Kardashian’s side boob,” Kohn said. “If what gets the most clicks wins, we have to start shaping the world we want with our clicks.”

Tech in Rural Villages: Lessons from the Philippines

A Networked Economy Turns Your World into an Outdoor Treadmill 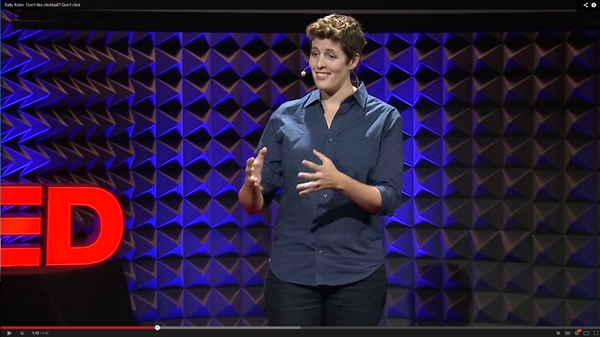