The other week Paul Townsend of Johnsonville Sausage provided this webcast.  He is also presenting an ASUG session at SAP TechEd && d-code Las Vegas next month as well: Learn How to Successfully Upgrade your SAP BW System to SAP BW on SAP HANA

Paul is the BI coach at Johnsonville Sausage.  According to Paul:

“This session will cover a template implementation plan for a phased approach to a Business Warehouse on HANA (BWoH) landscape. Presenters will discuss the lessons learned, success factors of managing project landscape, and upgrading to BW 7.4. Learn a little about what changes in BW, how best to optimize the environment, what is required activity for the conversion, and what can be planned for future enhancement.”

Paul said along the way they upgraded to BW 74 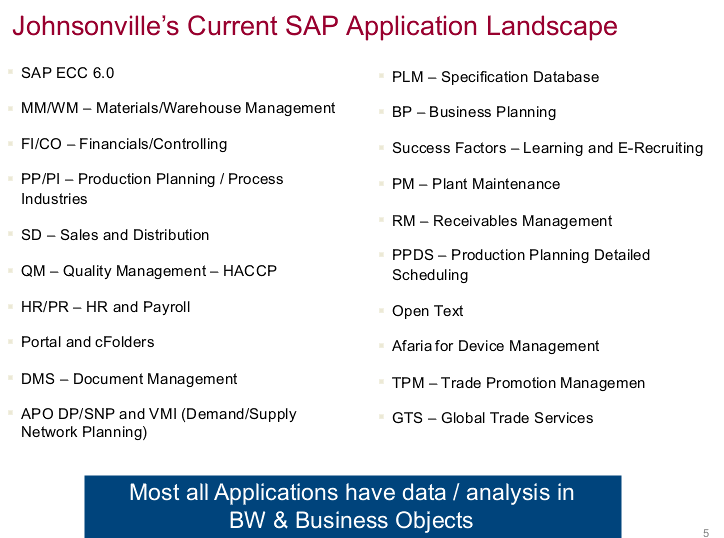 Figure 1 shows the application landscape.  Paul said “if SAP has an acronym, they try to own it”. 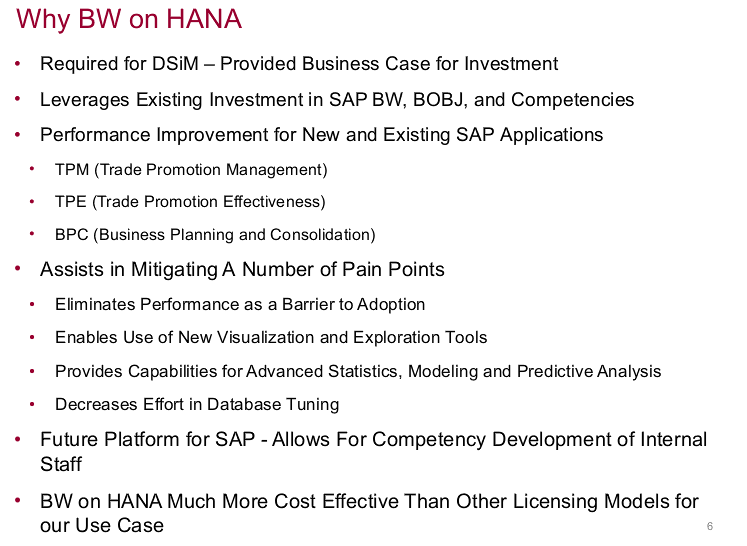 Johnsonville Sausage is a relatively small company, so why did they go with HANA?

Paul said they provided a business case while looking at Demand Signal Management tool,  trade promotion management.  This was “the fuel that sits on top of BW” and “everyone benefits”

They were looking for performance improvements – with TPM and BPC

He said performance was a barrier to adoption as the traditional BW system took a while to fetch back; they looked to mitigate with HANA

He also said the “new visualization tools work fast”.  He said they have a lean team. 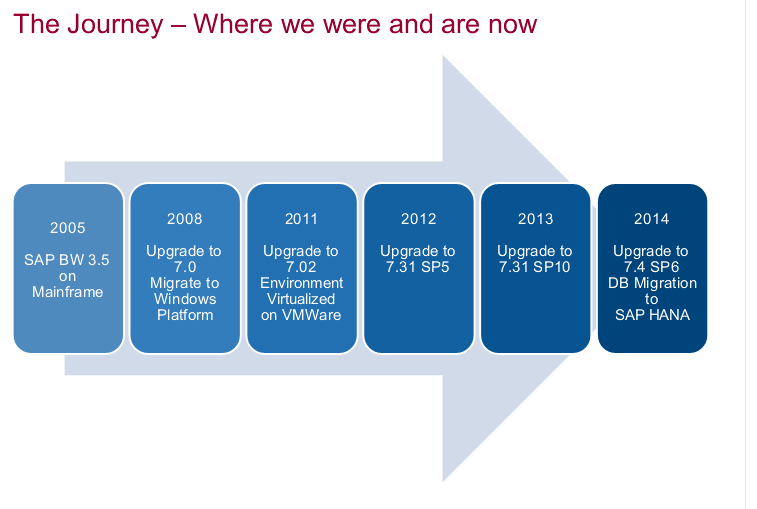 In 2005 they had BW on mainframe as shown in Figure 3.  Paul said the upgrades were slow in the past. 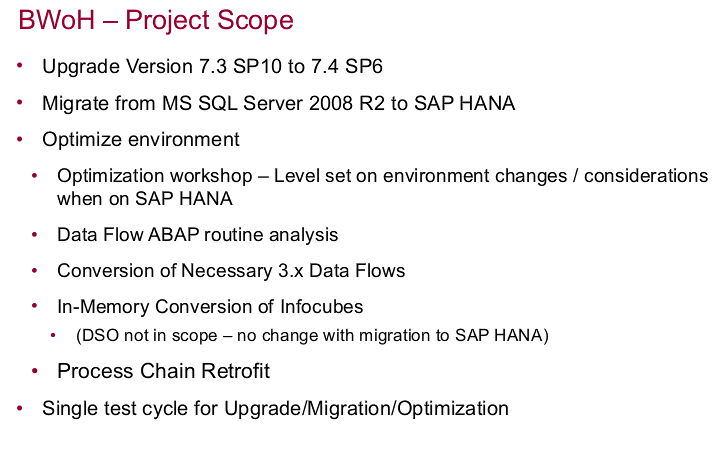 They had to convert 3.x data flows to 7.x

DSO’s had no change with migration to HANA He said the longest time was optimization

They combined UAT with Integration testing 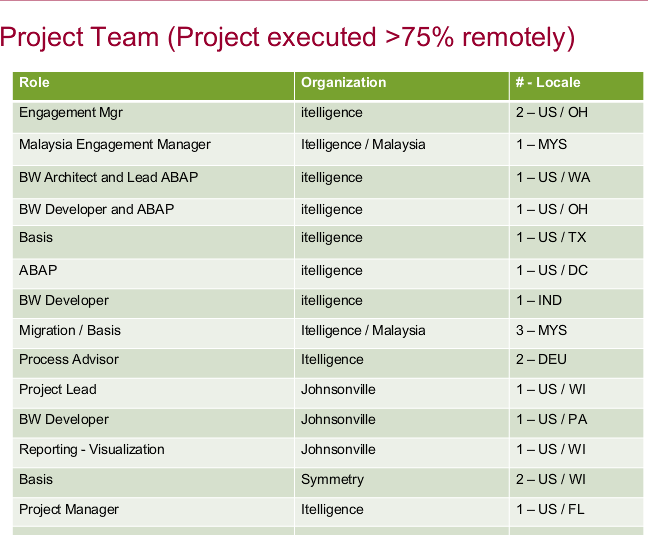 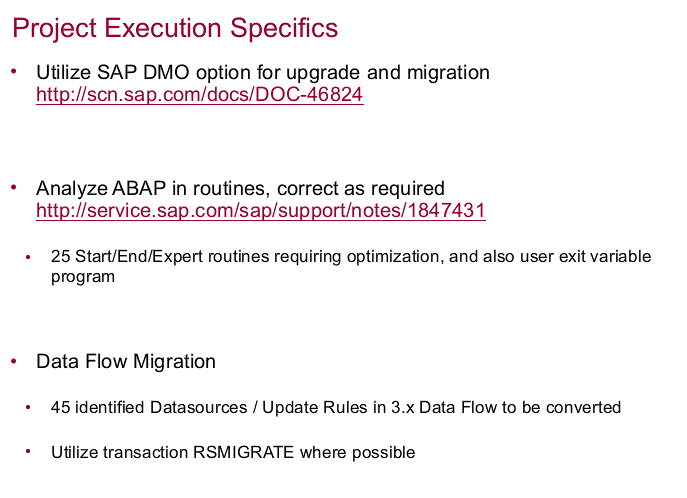 They had one single downtime; important to Johnsonville

Analyze ABAP – run until you have no red lights.  This would not touch custom Z programs

Convert 3.x data flows are for DSO and Cube.  Master data and attributes are not required to update during this upgrade – limit scope

RSMIGRATE – where possible – 3 to 5 that had problems.

How long it takes to collapse table structures

He said transaction RSMIGRHANADB simplifies scope, Request ID table and cube table – instead of links to DIM table you have the SID values

The BEx Query upgrade was mostly for APO implementation – simple, took little time to do 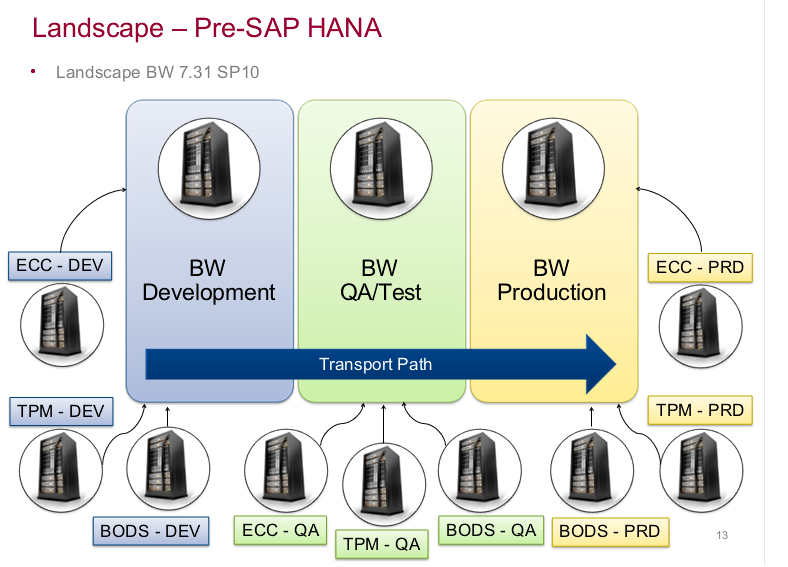 Figure 9 shows their landscape pre-HANA, with BW 731 SP10 and no BW sandbox 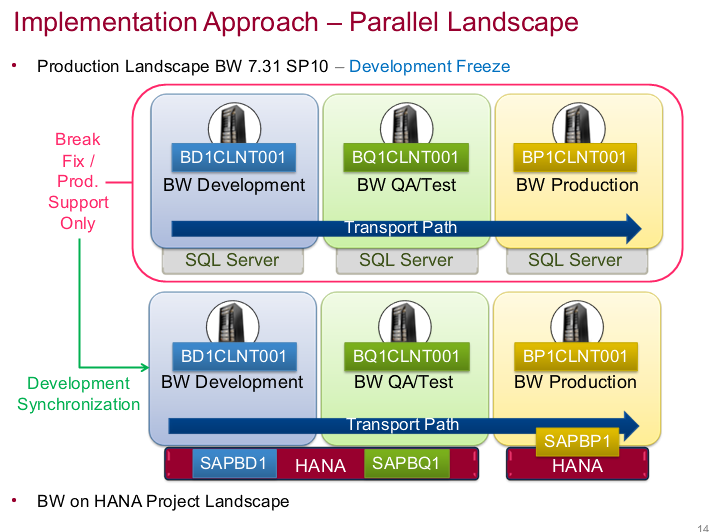 They had a development freeze

They have two HANA boxes with different appliances

1 appliance – 1 shared for DEV/QA – using Cisco.  They have a dedicated appliance for production, have a blade on standby 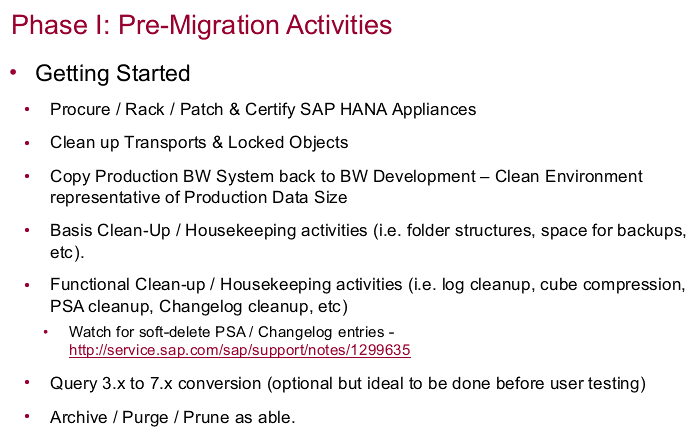 Their pre-migration activities include “cleaning house”

Procure/rack/patch phase did take time from procurement until into data center; took 6-8 weeks +

Basis also has clean-up including space for back-ups.

He said they had a soft delete PSA were growing since 2008; if you want a clean house, do this

He said they have no formal archiving process; looked at cubes to purge data not necessary 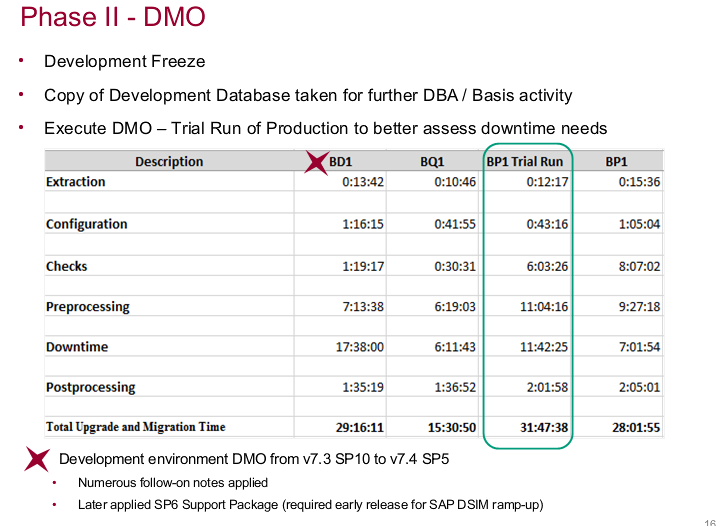 Figure 12 shows they had a development freeze.  They did a production trial run and see the different times it took

They learned config and checks

The Dev and QA files were smaller

He recommends trial run; easier to do with a parallel landscape He said they found compression to be 3:1 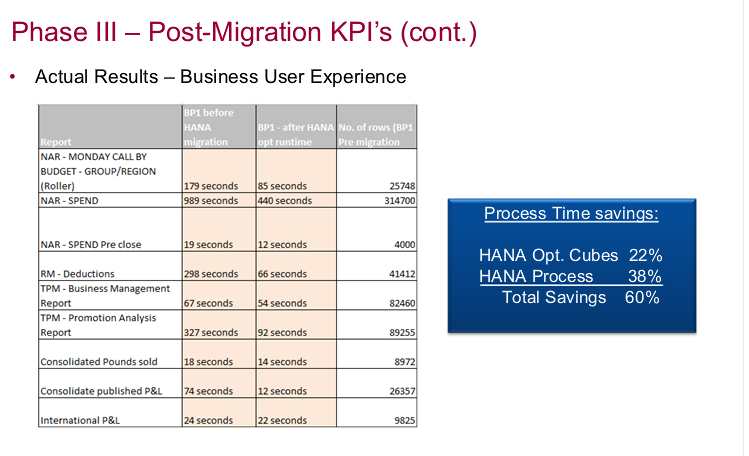 He said they are “setting new norm for business users” 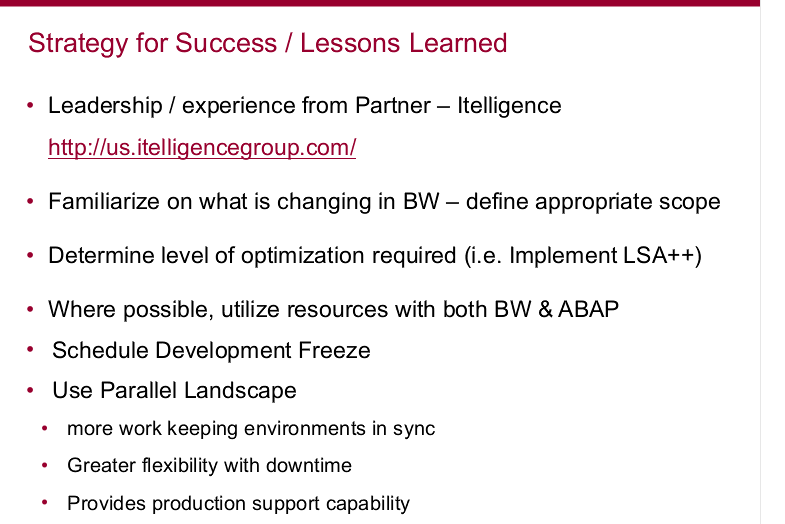 Paul said to find a partner and do the optimization workshop

He suggested to schedule development freeze to keep environment freeze 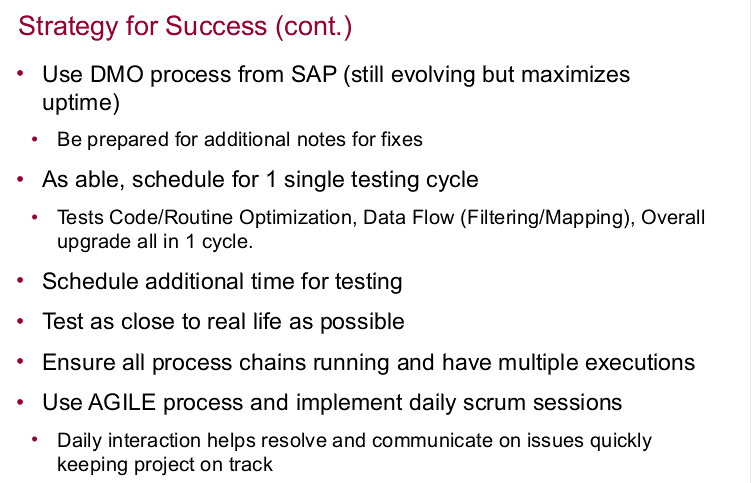 DMO bugs are all worked and the process is mature

He said to keep testing short, test as close to real life as you can

He said to run process chains a few times

They have been live since Memorial Day

Q:  Do you migrate all data to HANA, including old, cold data? Do you use near line storage?

A:  migrated all data in instance to HANA.  Do not use near line storage yet but looking at it for a project.

A:  BW production refresh did not include an ECC refresh.  A few pointer and delta issues resulted

Q:  Do you use business objects?  If so, did change to Hana affect the olap connection definitions and was there any impact to existing webi, dashboard content?

Q:  Have you had any unexpected outages in production?  Can you talk about backup and recovery with Hana?

A:  No unexpected outages while live.  After production box was racked an issue with Dev box occurred.  But no outages since live

Q:  I missed the cost effective point on first slide – is it really lower cost for you?  Where did you get savings?

A:  Johnsonville has runtime addition license which has limitations; savings not realy there but an investment for Trade Promotion optimization project

Q:  Does your IT dept handle necessary updates/backups/etc for the OS where HANA resides or is the handled by a 3rd party? Have there been any hiccups with the HANA database since go-live that have required a reboot and/or restore?

A:  Basis contracted with vendor.  Vendor manages Linux patches. HANA patches are evaluated they are not current with patches right now.  No hiccups with HANA db since go-live

Q:  Do your 3 Cisco blades share storage, or do each have their own?

A:  all share storage; Production 2 blades with one on standby.  All three active nodes

Q:  Is the ECC system moved on SAP HANA along with SAP BW or just BW?

A:  No just BW not ECC currently

A:  Looking at moving to Suite on HANA in the future

Q:  Is it considered TDI( tailored data center integration as opposed to an appliance )? (related to the Cisco blade ?)

A:  Believes yes but will follow up on the question

Meet Paul next month at his ASUG session at SAP TechEd && d-code in Las Vegas.  Special thanks to Paul for sharing his customer story more than once with ASUG members.

Thanks for sharing this. It will be really helpful to us for any migrations to plan properly.

Thanks a lot Tammy!!

This is very helpful and credible, as it has come from experience.