When I got an O Level (yes an O Level, not a GCSE) in Computer Science, thanks to my BASIC skills and expertise on an ICL (yes ICL)1904, the thoughts of SAP and developing Apps were nowhere to be found.

When I finally graduated with a degree in Mathematics and Computing I entered the fast moving dynamic world of COBOL programming, initially on a Data General (yes Data General) MV10. The word Apps and SAP were nowhere to be heard but the replacement of flat files with databases was the chat of the day.

So moving on some 30 years with numerous COBOL programs written which are now probably in the computer rubbish bin of time and 20 years of SAP experience in business process design, project management and that never forgotten technical itch driving me into writing ABAPs, the world of Apps caught up with me. The statement ‘Consumer User Experience is the new standard for enterprise applications…’ is being bandied around and SAP are getting in on the act.

Mobility and User Experience are high on SAP’s agenda. With Fiori and Personas becoming a free part of the SAP Licence there is a higher uptake on the offerings. In an earlier blog SAP UX: Managing the User Experience I drew a quick guide on how to initially decide on what tools to use based on the requirements the use case presents.

Fiori is a good tool and basically does what it says on the tin. If you are using standard SAP with little or no bespoke developments, Fiori will probably have a solution. You can also develop your own Apps and this is done with the tools available through SAPUI5 which is a collection of technologies which use HTML5.

Most of the customers Absoft deal with are upstream oil and gas companies. They have, like a lot of companies in other industries, well-developed SAP systems with a large number of bespoke developments. A number of them also run RLM. There are only a few Fiori RDS which fit some of their use cases. So putting my techie hat on I had a go at developing some of the Apps customers were interested in with Neptune Software. Neptune claim that it was developed by developers for developers. So I thought I would give it a test drive.

The first thing to do was to install Neptune. Our BASIS guys did it within 10 minutes of downloading the software. Neptune claims to run on anything from SAP 4.7 and above. We are running ECC 6.0 EHP 7 on our demo system so I had no chance to check any lower.

I dreaded the thought of developing the screens on the web for my precious Apps, having not used any web based development tools before. However, Neptune has an Application Designer within SAP which allows easy development of the required screens.

Through this tool you can create your screens and bind them to the required class in SAP to run the application. You can preview these screens without exiting SAP by clicking on the ‘preview’ button in the screen above. Your work of genius then appears on the screen. 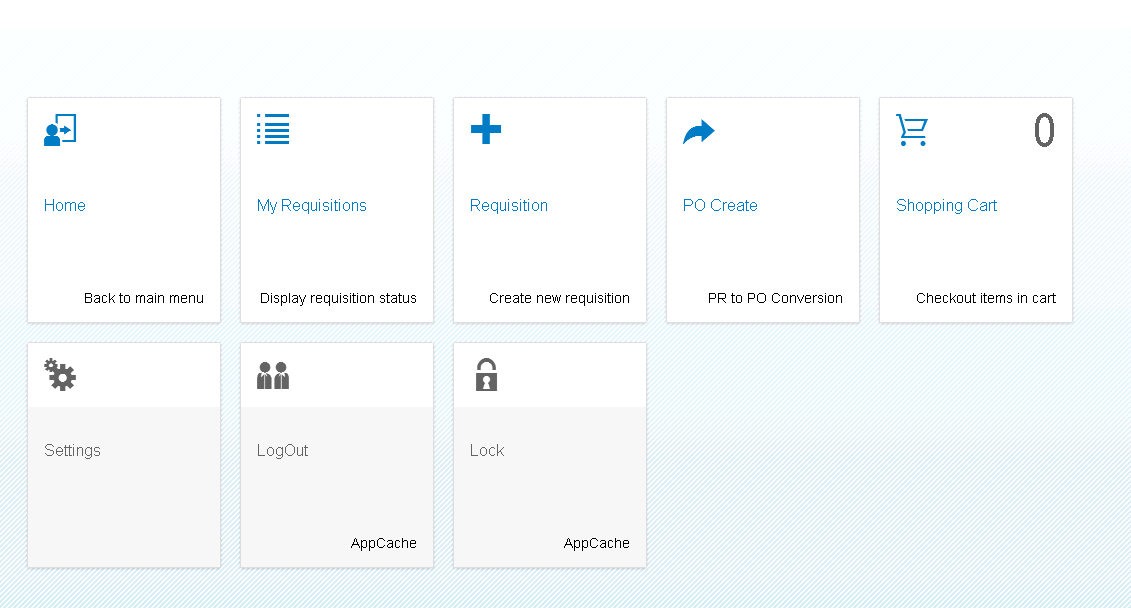 Clicking on one of these tiles executes the ABAP code developed in the Class Builder. The Class Builder is accessed via the button in the Neptune Application Designer screen or SE24. 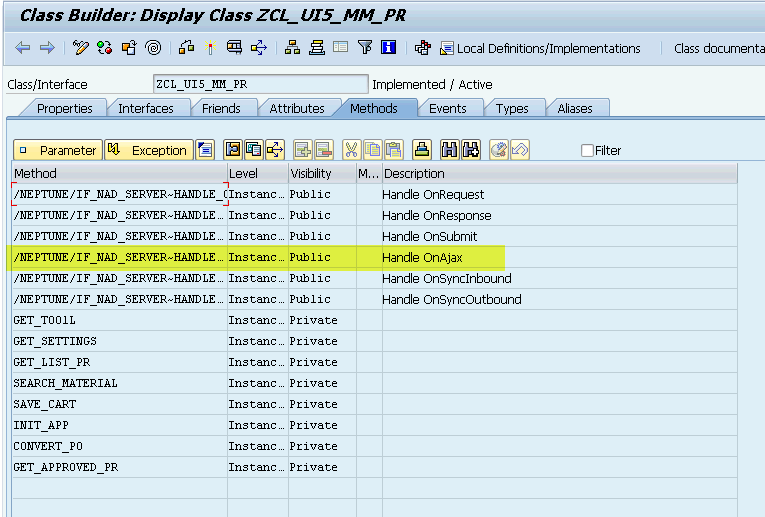 The method with the description Handle OnAjax is the code for binding the screens developed above and the friendly ABAP world. The key is the Ajax ID and the Model Source which you have defined against the list you are processing. 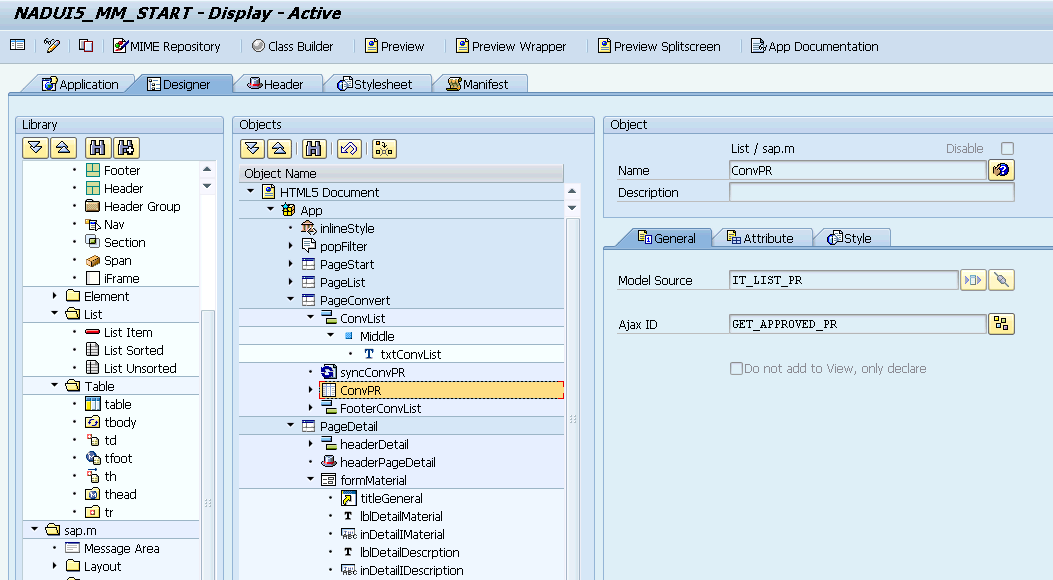 The above List is to display Purchase Requisitions ready to be converted. The Model Source is defined as an attribute to the class and the Ajax ID is the guidance on which method to execute in the Handle OnAjax method as shown below. 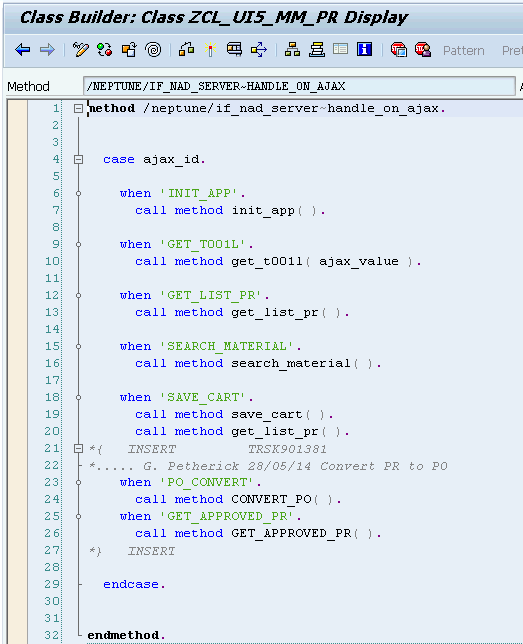 To develop the purchasing screens above and the methods behind it took just over a day with a little help from a colleague. We have developed a few more Apps in Neptune since with developments in HR, Plant Maintenance and Inventory with some Apps being developed to replicate parts of the RLM functionality.

Neptune works efficiently offline by creating a data cache on the device. With Neptune you write once, deploy everywhere, online and offline.

I was impressed with Neptune and how I, putting on my techie hat, could develop Apps with little HTML5 knowledge. I would recommend this tool to any die hard ABAP’ers who want to further their company’s mobility and user experience.

Neptune works well for bespoke applications and is relatively inexpensive to install. Fiori might be the tool for you as it may fit your use case perfectly but do not forget the cost of upgrading to the correct ERP level which may be required to implement.

Neptune and Fiori should not be considered as competitors because they could work well together with Neptune being the easier to use to develop home-grown Apps and Fiori the stronger for SAP RDS.

But as a techie by heart, Neptune certainly made my ABAP juices flow.

It would have been nice for you post the whole blog here, not just the intro.

I tried but failed to upload the pictures. I will try better next time.

It isn't too late to fix this one - you can still edit it to add the rest of the blog post.

I'll have a go. My first time at doing this so wish me luck:-)

If you need help, just ask 🙂

I'm probably reading the next version, looks good to me 🙂 .

Nice advertorial for Neptune, I'm sure Njål Stabell will be thrilled.

But seriously: thanks for sharing your experience as ex-developer grown manager. I think that makes it very clear how easy it is to get started with these tools.