The Unwritten Rules of Management

4 3 722
“You can’t polish a sneaker”
I was 30 mins into an incredibly boring presentation when that phrase caught my attention.

It’s catchy, I thought, but what the heck does it mean?
A little Internet sleuthing unearthed that the line is from the Unwritten Rules of Management, by William Swanson, former Chairman and CEO of Raytheon. Apparently, when Swanson was growing up, he and his friends tried to polish their old sneakers to make them look new but, no matter how hard they tried, they couldn’t disguise the wear and tear. Translated into business speak: don’t waste effort putting the finishing touches on something that has little substance to begin with.
It’s good advice from a book that contains lots of other useful aphorisms including:
In 2005 when these 32 principles first came to light, they were so compelling they were called the CEO’s Secret Handbook. Unfortunately, it was later discovered that many of these were already included in the 1944 book, The Unwritten Laws of Engineering by W. J. King.
Despite the controversy, there’s plenty of useful advice. Some of my favorites include:

If there’s one single piece of advice worth following, it’s this one:
“A person who is nice to you but rude to the waiter is not a nice person”
It’s the most accurate test I know of to determine whether you should hire someone.  And a great way to follow the no-******* rule.

This blog was originally posted on Manage by Walking Around on August 31, 2014. 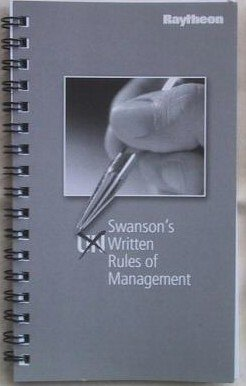 Nice one JB. Similar to the waiter example...

As John Wooden once stated: "Character is what you do when nobody is looking.".

Thanks for the good article Jonathan.

The link here to your no ****hole article doesn't work, though the same link does work from this same article on your website.

Thanks Astrid. I fixed the link

JB - I believe the original quote was about polishing something else. More curiously, Mythbusters found out that you actually can.

Relating that back into the "Don't Hire A***", what I like about the Kawasaki survey that you link to is that we can all take something away from it. Sometimes, we all interrupt, we can all be rude. Sometimes we take our personal life out on people at work.

A little self-awareness goes a long way. For those that are interested, the book Leadership, Self-Deception - Getting-out-Box is worth perusing.