Where do you stand on the Hype Cycle track?

I am on the sidelines. My thoughts are that most people who work and play in the trenches of ERP systems have a little more grounding in reality than industry analysts and the press.

It’s not something that can really be helped, this chasm of opinion on the part of those facing the masses and those facing the hard cold stony face of running and implementing systems and then occasionally getting thrashed by customers and then trying to in turn thrash suppliers.

Hyperbole in the promise of technology by vendors is one things but over-exuberance and naïveté on the part of project sponsors and business leaders is something quite extraordinary – something that many of us have to deal with every day.

In reality I think every project has to have a degree of blind faith, aspirant thinking and yes, even naïveté but eventually there has to be a point when you decide that something is going to be a resounding success and perhaps even exceed expectations or is going to be a bit of a damp squib. The Economist actually had an interesting piece on the Hype Cycle Hyperbole in August – it is worth a read, though it says nothing about the value for projects, it doesn’t take much to realize how dangerous hype can be.

Brandon Butler from Network World says that it has been assembled by Gartner for at least the last twenty years, trying to jam every new hip thing into that elongated bell curve that looks somewhat similar to a heartbeat!

What’s good for the analysts and press doesn’t necessarily translate into something good for the business or IT operations. 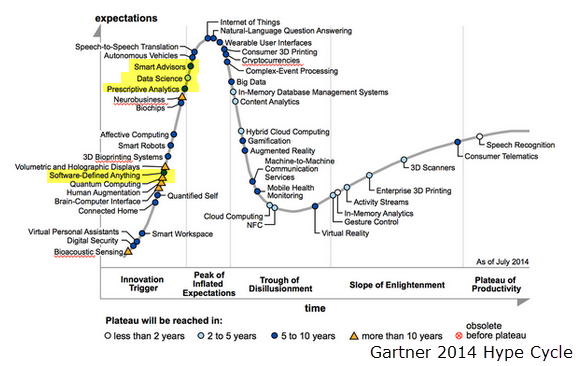 The Gartner Hype Cycle was recently updated, I thought it was interesting that 3D printing remains such a big deal, in memory analytics is on the decline and cloud computing is being viewed as not cracked up to be all that we thought it would be – for now at least.

One could argue the representation is contaminated by the ‘pay-to-play’ model that analysts and some mechanisms in the press (like advertising) use, but you could also argue that this is a natural way for things to ebb and flow when analysts try to appeal to everyone.

Things that I noticed on the Gartner chart that were considered on the up-an-up were the Software defined anything, prescriptive analytics and data science along with smart advisors.

I have to admit that I also had to do some research to determine what exactly these things are. So in case you are not in the know, here’s the low down.

The rest of us might simply define this as being virtualization of logical things on a common piece of physical stuff, like many servers on a single piece of server technology, early versions of this might be things like software based telephone like VOIP technologies.  I can’t see much more beyond servers and phones but then maybe I don’t see the vision of a Max Headroom or VIKI but then maybe I am just too practically minded.

There‘s a suggestion that Prescriptive analytics is the third and final phase of business analytics (BA) which includes descriptive, predictive and prescriptive analytics. However I think there is something missing here. Surely the real value of the analytics is in the outcomes? The final execution of the ‘prescription’ so to speak. Though this is likely heavily focused on health care, there’s good relevance here for the energy industry where data, rules and models are thrown together to make recommendations.

In high speed environments eliminating the ‘wait for a decision’ step is probably going to be even more critical in the same way that high speed stock trading works today, though you could say that stock trading is more like rolling the dice than playing poker or blackjack. My money is on prescriptive analytics plus automated execution system but in then end isn’t prescriptive analytics just better analytics?

Much was made in late 2013 and into 2014 about the importance and growing role of the ‘data scientist’ – so much in fact that it was anticipated that a bunch of new job openings would rear their heads in the market for ‘data scientist’ positions. A few did but in the end, how does a data scientist really differentiate himself from a business analyst? The term has apparently been around since the 1970’s. In 2008 two guys coined the term “data scientist” to define their jobs at LinkedIn and Facebook and now it is a hot job title.

For me, this one is a fad or rather it’s just analytics with a hip name but then perhaps I am just jaded and want to be a data scientist myself but just don’t have the mathematics smarts to be any good at it.

Well I will tell you now, I had no idea what this could be. I could fathom a good guess but we would have to go back to the source on this one.

Hung LeHong, Gartner fellow and VP mentioned it along with  autonomous vehicles but I had to dig deeper into a Gartner paper entitled Gartner Top Predictions 2014: Plan for a Disruptive, but Constructive Future from Oct 2013 that described it as being “specifically focused on a particular content domain, a particular class of user or both. They excel at evaluating new evidence and finding where and how it may fit with existing content, offering the user a shortlist of best matches based on all the available information. They make smart people smarter. “  So was it a person or a technology? It wasn’t clear.

IBM’s Watson and Apple’s simplistic SIRI I guess are  being considered a ‘smart advisor’ technology or virtual personal assistant technologies.  Again, is this really hyped, or is this still play-thing technology scrambling for a place at the adult’s table?

I guess in my mind, these four things aren’t really particularly exciting or hype-worthy but then again, all it takes is for one or more companies to jump on a band wagon and start making a big noise and that theme will suddenly become the most awesome thing that you could ever want. Do you know anyone with an iPhone that regards SIRI as anything more than a play-thing?

What I would like to see is a refresh of this concept but split into hyped technology for consumers and hyped technology for the enterprise. While the end result may all fall towards benefits consumers, telling the CEO of a company to invest in SIRI to make more sales may be a bit of bitter pill to swallow.