“REPORT HAS BEEN DEACTIVATED”. You may find statement saying that within ABAP code like reports. One may wonder what does it actually mean. Usually the case is that the code is obsolete and it should not be longer used.

What makes SAP code obsolete? These are cases I’m thinking of:

As soon as the refactored code is delivered or implementation type of errors were explored a corrections are prepared (mostly in form of SAP Notes). These corrections mark the code as obsolete and prevent execution of it.

That’s basically what happened in case if we see e.g. REPORT HAS BEEN DEACTIVATED in the ABAP code.

To enforce that particular ABAP code will not be used it is even commented out. The code needs to be comment out instead of simply removing whole objects in order to prevent unnecessary ABAP dump. By this user informed about obsolescence: 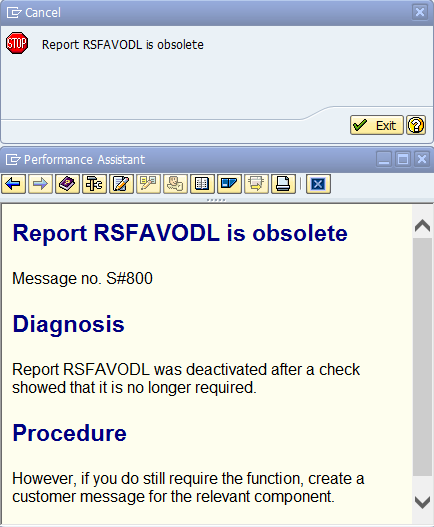 Other point of view (as suggested in the comment that introduces deactivation of the function) is software archaeology (see 1st screenshot). Even seems it is practice in SAP that after few more releases particular code is not only commented but also removed it is very nice to see a track of software archaeology 🙂

PS: This blog is cross published on my personal blog site.