Resetting hosts and services cache in AS ABAP

It is not uncommon that a TCP service (e.g., sapmsDEV) is not known to AS ABAP while working on the definition of an RFC destination sometimes forcing the restart of the SAP instance.

A restart of the SAP instance can be avoided by invalidating the host name buffer (which includes the services buffer). 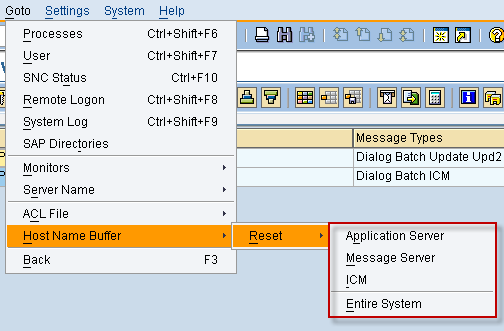 Here there are options to reset the host name and services buffer for different areas of AS ABAP.

I have not noticed a negative impact for doing this operation even in the busiest systems, AS ABAP will reload its cache and the TCP service definition will be known to the system which would allow you to complete the RFC configuration.

Another scenario I faced recently had to do with a change of IP in hosts file. ICM had the old IP cached and connections were not going though. Resetting the ICM host name cache solved the issue without disruption end users.