How is Fantasy Football Like Running a Small Business?

Sports fans and data geeks!  The 2014 NFL season is just one week away.  Fantasy pool players like me are pouring over stats ahead of our draft nights.

I learned a lot from playing last year.  I drafted terribly late round, went too QB heavy and lost a lot of games down the stretch. Losing key players to injuries hurt my weekly scoring.  It’s time to fine-tune my draft strategy based on this year’s analysis.

Like any small business, I have limited time and resource.  I’m looking for smart bets to make big payoffs.

What sort of adjustments will I make this year?

I am playing in the same 2 QB, 8 player league as last year.  Head-to-head weekly matchups, the team with the most points wins. Good QBs will be a premium, but not the key to winning the league.

Every draft strategy starts with a RB.  We’ll get into why momentarily.

I’m looking at my team this year like a stock portfolio.  Each position should fulfill an expected return, so for a lack of a better word, I’m investing in players expected to score above their expected average.

10 mock drafts at FantasyPros, combined with Yahoo Fantasy Football scoring and I have my data set for hypothesis. 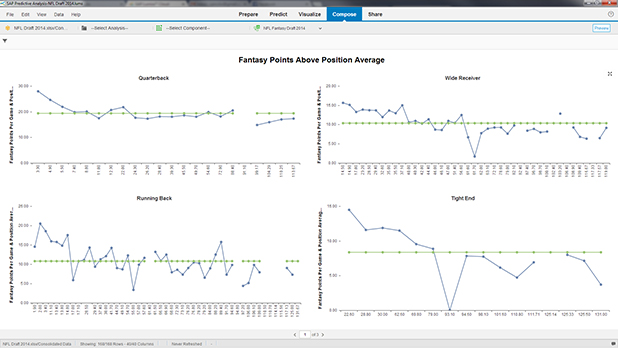 Hardly. I took an average for each player’s draft position, and then calculated deviation based on their highest / lowest draft position. 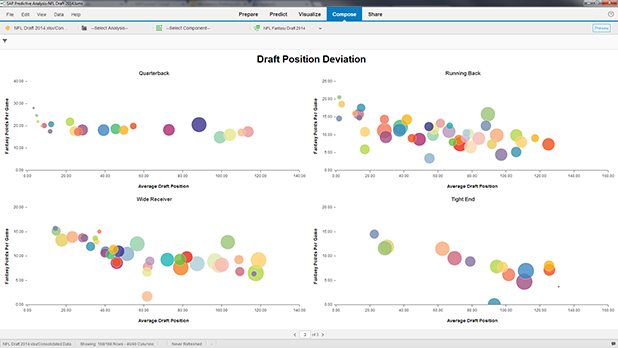 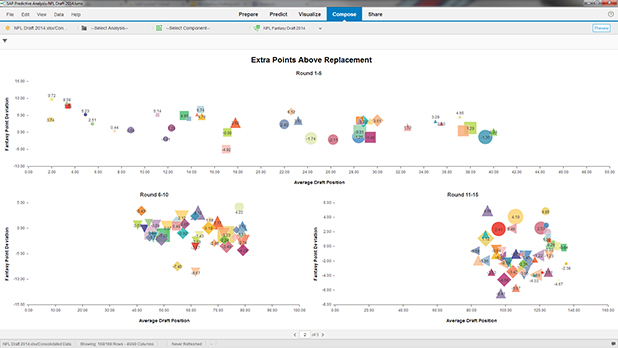 Picks 1-16 are fairly locked in.  In my personal opinion, the mock drafts are still weighing QBs early despite above average WR performance in 2013.

Draft variability in rounds 3-5 surprised me.  It’s close to a 2 round range (8 picks per round) from rounds 3-10, with a majority of receivers being picked in later rounds.  Safe to say the league will be won or lost with these picks.

While this blog talks to fantasy football, you could easily substitute drafting strategies and point differentials to revenue tactics and profit margins.  I combined 10 mock drafts with fantasy point scoring.  You can, for example, easily combine existing customer data with industry or geography information for deep insights as well.

Download SAP Lumira today, or explore your own findings on SAP Lumira Cloud.