Remember when the New York Yankees were just a local baseball team in the U.S.? Of course you don’t.

No one does. The team has been a global icon for that long.

FC Bayern Munich is on a path toward similar worldwide recognition, but its evolution from German soccer club to international company involves big data — both on and off the pitch.

One of Germany’s top soccer clubs, FC Bayern will enhance its all-around performance with SAP software that amasses and analyzes data about player health and performance, the companies announced last week. This three-year partnership follows on the heels of Bayern Munich using SAP CRM to tailor individual fan experiences via mobile devices.

“SAP has the technology to support three of our main goals: (1) optimize our business processes to facilitate our global expansion, (2) help our team stay fit and perform at their highest level and (3) give our fans the best possible experience,” FC Bayern’s Executive Board Chairman Karl-Heinz Rummenigge said in ComputerWeekly.com last week. “Leveraging innovative technology, we want to permanently secure a global top position for FC Bayern.”

Did you notice that only No. 2 had to do with the soccer club’s athletes?

There’s a team within FC Bayern that must keep pace globally with the club’s competitors and meet its fans’ expectations, but this team isn’t made up of professional soccer players. It’s a business wing of the club that makes FC Bayern more than just a soccer club, but an international business.

“We have more than 300 million fans all over the world,” Jörg Wacker, an FC Bayern executive board member, told SAP TV. “We are trying to get better connected to these fans.”

FC Bayern’s 21st-Century strategy centers on loyalty to the club’s fans, Wacker told ComputerWeekly.com. Those fans inhabit the digital realm, so FC Bayern must heavily rely on technology — putting the soccer club in stark competition around the world with other soccer powerhouses, such as Real Madrid and Manchester United.

That’s why you may soon see the number of FC Bayern fan jerseys rising to meet the club’s international rivals. SAP software will likely help the club more easily and effectively coordinate and organize its merchandise.

But FC Bayern’s main business is to win soccer games, so SAP’s solutions will also help coaches and players analyze skills and performance. Data-driven visualizations will help them maximize training, focusing on each player’s strengths and weaknesses.

“We’ll have a completely new digitalized world,” Rummenigge, FC Bayern’s chairman, told SAP TV. “It will be state-of-the-art in our club.”

Simpler ticketing and stadium operations will help improve the fan experience. And fans will be able use their mobile devices to access players’ data and statistics, including shot speed, accuracy and distance.

“SAP can help us to reach FC Bayern Munich’s goals and to guarantee perfect service to everyone,” Rumennigge said. “Together [FC Bayern and SAP will] create new possibilities for the future.”

That type of collaboration lets FC Bayern — and all of the other sports teams that SAP works with — tailor the technology solution to its exact needs. In the United States, the San Francisco 49ers, Washington Redskins and other NFL teams have customized their own versions of SAP’s scouting analytics technology, as CNET noted last week.

Embracing and tailoring this technology for its needs will help FC Bayern set the stage for the soccer club’s continuing rise to global prominence. 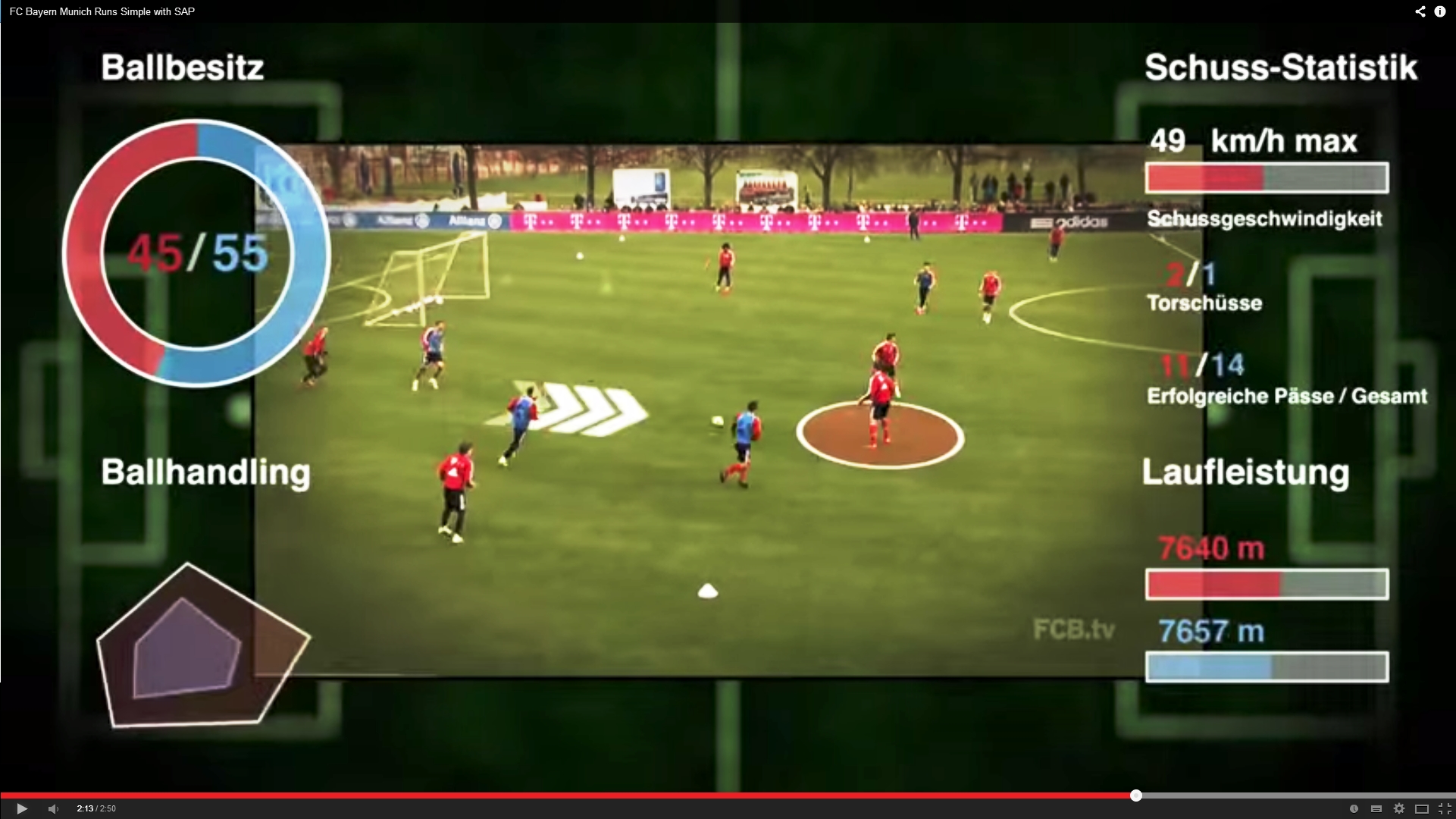 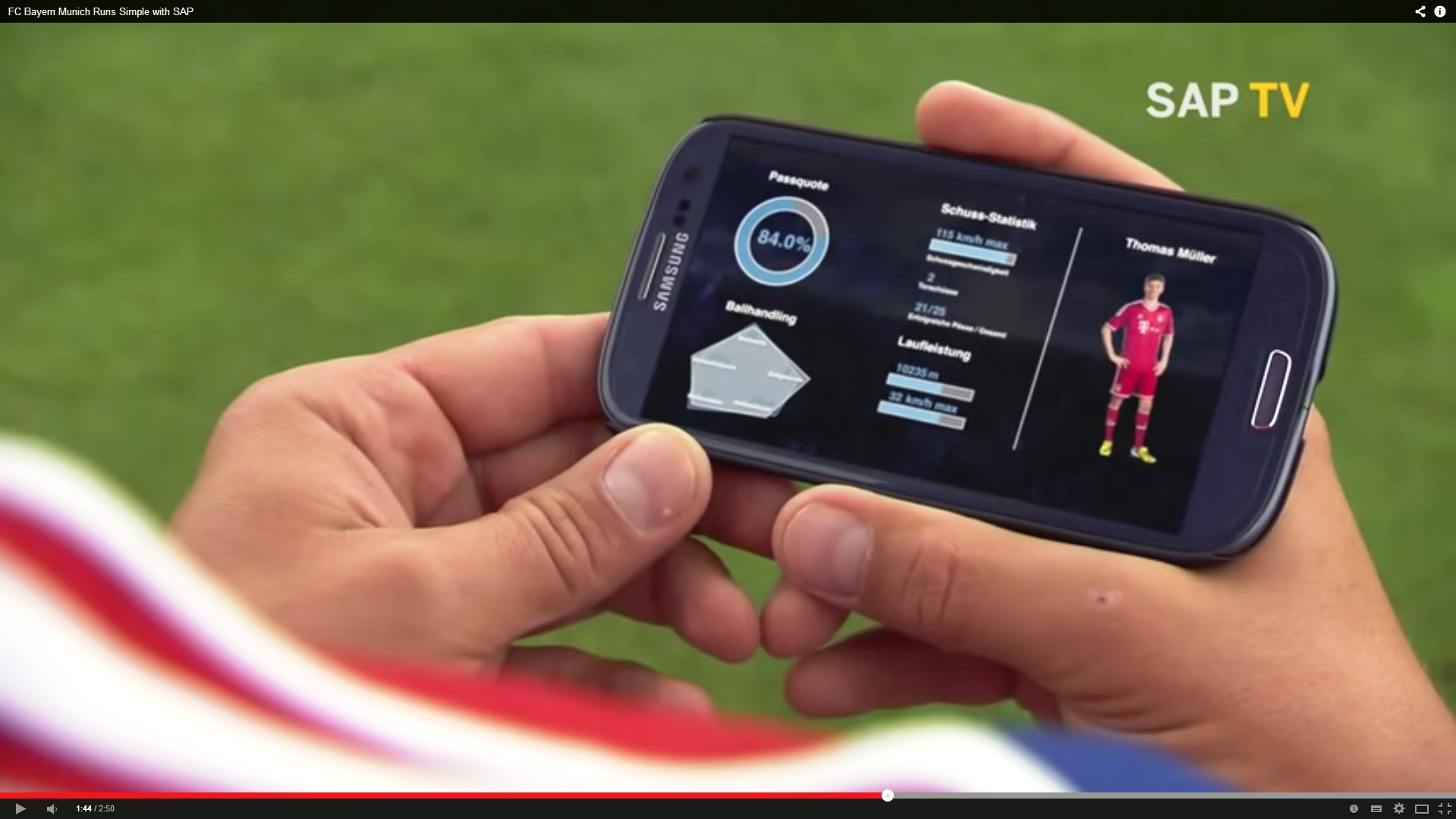