Did you know that the DemoJam this year is going to be turing 10 years old? That’s right this is the 10th anniversary of the SAP DemoJam event and we wanted to see if anyone can dust off some of their photo albums and share their coolest moments with us? Have a story to share about your favorite DemoJam experience?

For me I thought I would share a moment in DemoJam history involving two great friends and a defining moment in what DemoJam was and is all about. The year was 2006 and we were in Las Vegas. It was my second year at SAP and also a defining moment for myself in terms of this particular event. Ed and Dan (fellow Enterpise Geeks) were on stage presenting the infamous SAPLink. To this day I still vividly remember the second their demo was over and the audience voted (we voted after each demo at that time) Shai Agassi stood up and started asking questions (this was unplanned and has never happened before or since) he was so in awe of the demo and what it could do that he wanted to know more! Dan and Ed did an awesome job responding. The won in the end as well! 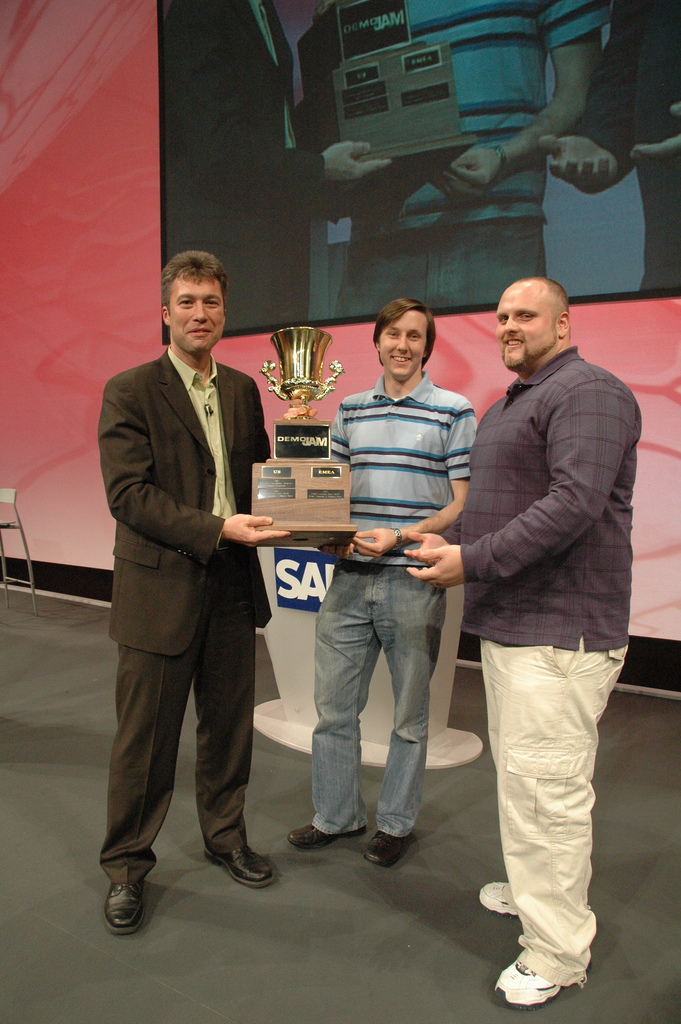 This was also the first time just “two guys” submitted a demo in the past it had always been organizations and companies. It was not the first “ABAP” demo though 🙂

Another bit of personal side history was this was also the first DemoJam (Demo Jam) back then where Shai actually threatened to pull out his 100s of Power points if the audience in the very back did not settle down and show a bit of respect. Which when we went on to Amsterdam resulted in them asking me to go on stage and be the “warm act” which later went on to taking over the hosting of the event for a few years.

DemoJam is an awesome event and one that spawns not only memories but the imagination around technology!

What is your fondest or most dominant memory of the event? When ESME went on stage? When the “shark” pulled through in the end? When we allowed Powerpoint for the first and only time?

Please share your memories and any photos or videos you have laying around we’d love to see them!

If you have a demo of your own to submit this year then be sure to do so BEFORE Sept. 10th!