This blog deals with the dependency graph of (an) object(s) required to maintain the list of objects in order of their dependency on this base object.

Thus we, basically, establish an acyclic directed graph of objects and their dependencies. At any point in time, it can be useful to establish a hierarchy of any object in this graph to check its dependents at various levels. While establishing a hierarchy for such an object would mean traversing from this node, through its dependents, to the node with in-degree one, being an acyclic directed graph, there might be more than one hierarchy for this particular object, which means, there might be more than one nodes with in-degree one. In such a case, instead of maintaining a hierarchy, we can choose to maintain an ordered list of objects based on their dependencies, thereby, essentially, breaking down the problem, to ensuring that the child object appears before the parent object, when we traverse from such base object to the “grandest” parent or the top level node or the node(s) with in-degree one.

Why is it necessary

1. Typically, in an environment, such as  HANA’s, we try to push most of the processing logic into the backend, which means that there would be too many DB objects in the to take care of. In a developer environment with, more than just a few developers, we frequently, have the same DB object(s) being used by multiple developers e.g. a table T being used by two procedures, each belonging to two different developers John and Jim, and then, these procedures further being used to establish a complex graph of dependencies. John, casually, makes changes to the DB object without caring for its repercussions. It might invalidate the entire chain of objects created by the Jim, say, John drops a column from the shared table that is being used by Jim’s procedures. Just like the procedures, Jim might have multiple such DB objects, using this changed table, which may have now been rendered invalidated, so much so, that it might not be possible for Jim to remember each of them, by heart; much worse if the change to the table has had a ripple effect across the circuit of dependency, established by this base object table. Now, Jim has two problems:

Now, John has a bit if a homework to do to avoid making Jim’s life miserable again. Before making such a change, a utility tool like dependency graph could have helped him establish the dependency graph for this Table T. And he could then have taken a call regarding going ahead with that change.

Again, Jim, still, does not have all lost, if he can establish the graph for this object and find out what is/are the object(s) that need to be re-worked on
2. Again, a lot of applications divide their consumption into design time and the runtime. The runtime DB artifacts to be used are created during the activation using the metamodel of the runtime, stored as the metadata. If since last activation, changes to the run time have been proposed in the design time, then the HANA system will not be able to tell you until the proposals are actually activated. However, the metamodel does have a way to tell if a modification/enhancement has been made post activation. So a change log is required to maintain the list of objects that have been changed; as also, the rest of the objects that have been rendered invalidated logically, because of the dependency between them. The added advantage to this is that we do not have to regenerate the entire runtime. We can deal with the affected (direclty/indirectly) objects only

Key features from this graph

1. Its an acyclic directed graph

3. Non leaf nodes can also be the base objects that trigger the chain of invalidation

Build the dependency graph for the table P.

1. The leaf nodes are tables. So tables are the lower most database artifact that when changed invalidate the graph of objects

3. Dynamic SQL is not taken care of

4. In terms of graph theory, there can at max be 1 base object in a particular path to the top most node. That base object is the first vertex of that path.

1. Child object should get activated before its dependent(s) at any level in the graph.

2. We use Breadth First Search to prepare the relationship data between the nodes in the graph. We do not use the Depth First Search as it requires recursions.

1. Build a parent-child relationship data between the nodes in the graph

2. Prepare the first list of processed nodes from the above structure. We call the list the List A. We push the base object into the list and mark it Processed. For the rest of the list, we propose the following approach. To decide if a node is processed or not, we look at the Parent Node column in the Parent-Child List prepared in step 1. For each Parent Node in the list above, we find if there are any child objects that have not already been processed, that is, they have not already been included in this list of processed nodes i.e. List A. If there are such nodes then, we include those unprocessed child nodes first and mark them as unprocessed, and then include the current parent node as processed.

Lets see how this goes.

ii. we take the first Parent Node from Parent-Child List that is N and see if its already included in List A. If not, we look for its children. We find that P is the only child of N. And P has already been included. So we push N in the list and mark it processed. So, List A looks like:

iii. we take the second Parent Node from Parent-Child List that is Z and see if its already included in List A. If not, we look for its children. We find that P and Y are the children of Z. And P has already been included. But Y has not already been included. So we push Y, first, in the list and mark it Unprocessed. Now, we push Z in the list and mark it processed. So, List A looks like:

.. we continue this approach till we iterate through all the elements in Parent Node column of Parent-Child List. So at the end, this is how List A looks like:

3. Now, from List A, we keep deriving subsequent lists, by checking for only the unprocessed nodes, on the same lines, until all the nodes are processed

1. The HANA DB provides system views like PROCEDURES, VIEWS, OBJECT_DEPENDENCIES which can be used to build the dependencies and check the valid/invalid status of the chain

The technical implementation of this involves talking with the metadata views of the SYS schema. The views involved are: 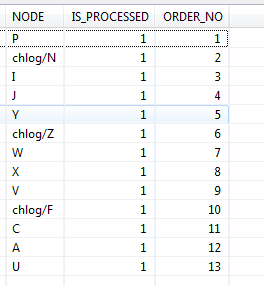 We can have multiple objects pushed into changelog_tab and the procedure will give us the correct order in which the objects depend on each other. Try the following input and run the procedure: 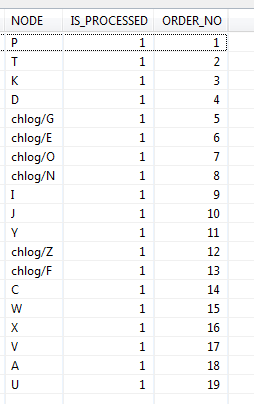