The next 25 Years: Systems at a Glance

In the computer world, Greed equates to walled garden, and Generosity equates to an open field. In the software platform, Microsoft had dominated for the last decade, because MS served it’s customer’s materialistic needs, until Windows 8, the Walled Garden. Learning Windows 8 UI is like learning how to drive upside down. Microsoft has over-complicated the problem by naming it’s ARM version of Windows(Win RT) as an edition of Windows 8. Since the cheapest edition of Windows 8 (Win RT) can’t run any previous Windows programs, customers are furious with Microsoft. Developers who pay Microsoft will get more application priviledges(& Windows store access), than developers who don’t. And, Windows RT only runs software from Windows store. This has lead to Microsoft’s downfall from the pedestal of computing software platform.

The problem with selling software is, customers expect lifetime usage, and if a software expires before the buyer is dead, it should mention it’s expiry date. When buying MS Windows, or computer installed with Windows, no-where on the package is the expiry date mentioned !

With Microsoft Operating System market share going down, Linux and other open source software, will be moving up. 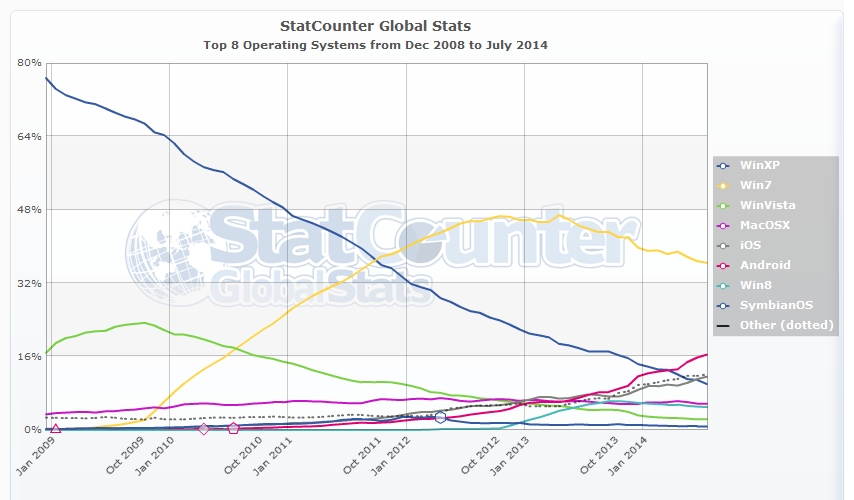 This conflict has now spread out of the virtual software world, into Electronics, Manufacturing, Media, Farming, etc.

In the farming industry, Permaculture is changing perspective around the world. Permaculture is a combination of Agriculture(farming) and Aquaculture(fish farming), in a symbiotic relationship with the environment. Principles of Permaculture:

Various companies are making open source API for electronics and microchips: Adapteva, Arduino, Open Cores, etc. The most interesting of all open hardwares is Project Ara, now led by Google. It is a modular platform for Smartphones, where modules can be 3D printed. Project Ara has the potential to turn component manufacturers into module manufacturers, and with modules bieng interchangable Project Ara will be a very customizable device. ChooseBlocks is another interesting project, and inspired by Project ARA. The two best Operating Systems for modular hardware are both Linux based: Android L, and Gentoo Linux.

This all means SAP should expand it’s Software as a Service(SaaS) offerings and modularize the software components to integrate with one-another on SAP cloud. Also, Open Sourcing old or outdated components would buff SAP offerings with Open Source credits.

And last, but not least is our beloved pastime, file-sharing, also known as Online Piracy. Online Piracy is the best example of Gift Economy beating Market Economy; and Generosity beating Greed. Regardless of what the media industry wants to brainwash you with, Distribution has certain laws:

Piracy Networks are thriving despite of all the bullying actions by Hollywood, US Government, Interpol, etc. What does that tell you? People are offering Knowledge at the risk of imprisonment, therefore…

GENEROSITY IS A VERY POWERFUL FORCE !