Success! Made my first steps in ABAP in Eclipse with the Feature Explorer…

And the winner is … 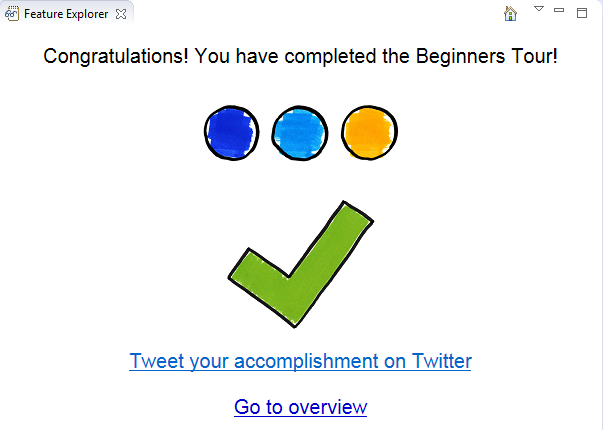 My name is Stefan, and i’m working with SAP development (namely ABAP) since our migration to SAP in 2003/2004. Shortly after our Go Live with SAP my company was bought by a big Danish company, and during the years our SAP system was first integrated into their SAP landscape, and then after a new migration phase, in 2011 closed down. In that phase I was lucky having enough experience to get “drafted” by the ERP development team. Since then I do ABAP development for the “big mother”.

My first contact to ABAP in Eclipse was during the “DSAG Jahreskongress” 2010 in Nürnberg, where Thomas Fiedler held his first presentation about the upcoming tools and the Eclipse framework. I was really pleased and looking forward to the first release of this fantastic development tool. But then I did not hear or read anything about it until the “DSAG Jahreskongress” 2012 in Leipzig 😕 .

The more I was pleased with that news, so I instantly decided to inform my new boss and my colleagues about it, well knowing, that we would not have a chance to use it without an upgrade of our ERP systems. But I followed every possible event, where I could get news about the AiE.

And then the fantastic thing happened: my IS department announced an upgrade of our systems to 7.31 SP11 in June 2013! Great! I will be able to use AiE!

I couldn’t even wait for the finishing of the upgrade and already started to get contact with AiE to our Modelling system. Of course with little luck, as there were not even the basic settings in the system and also the necessary roles and authorizations for development from the Eclipse platform were missing in my profile. But I thought: time will bring…

But then the worst case happened: the upgrade was stopped 2 days before the Go-live-to-Production weekend! Damn!!!

I got in contact with Thomas, and he suggested to schedule a Websession with all my development colleagues to introduce the AiE to my department. Which I thought was a brilliant idea, and after a short talk to my boss, who also was totally hooked to that idea, was immediately done.

Meanwhile we had this session, I have installed Eclipse and the ABAP Development tools, and have done my first steps in AiE with help of this fantastic Feature Explorer! And I must say: it overcame my expectations by far! It is such a great experience to use this AiE, that I think by myself: “How could we have done our work all these years?”… Ok, this wouldn’t be fair against SE80 and all the fantastic development tools within SAP, which I used through the past 11 years. But I think, this is a “quantum leap”.

So, next thing for me will be to learn and try and work with the new tools, and visit one of these “CodeJam” sessions. And I think I’ll gonna be something like a “Mentor” for my colleagues, helping them to use these tools (maybe not all, but at least some of them 😆 ).

I’d like to thank Thomas for his support introducing the tools to my department. And even more for this great work in improving the tools and bringing them to this state.

And to every “Newbie” out there: try out the Feature Explorer, it will help you! It is a very good tool to get known to the basic features of AiE, and in addition with the Reference card for the Shortcuts it is rather easy to make the first steps into a new world of ABAP development.

So: Let the community grow!