In SAP BW Release 7.4 SPS2 the domain RSCHAVL was converted from CHAR 60 to SSTRING 1333. In 7.4 versions the characteristic 0TCTIOBJVAL references the data element RSCHAVL_MAXLEN and has the type CHAR 250. Since the maximum permitted length of characteristic values is 250 characters, the values of all characteristics can be stored in 0TCTIOBJVAL. 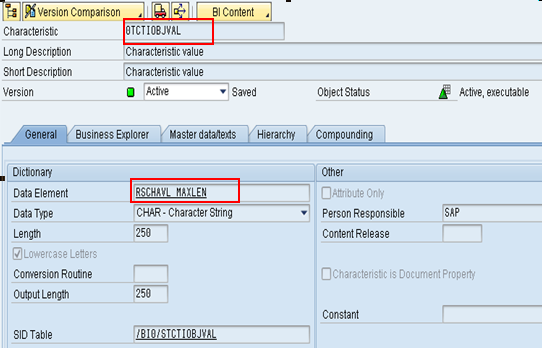 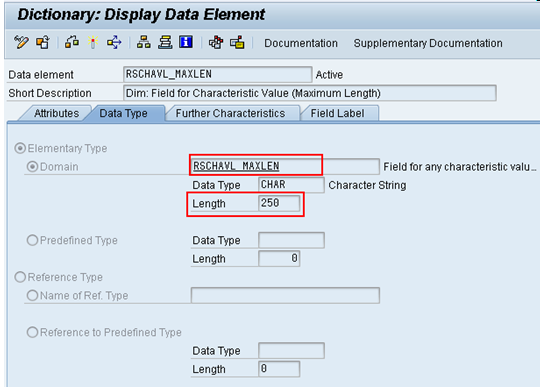 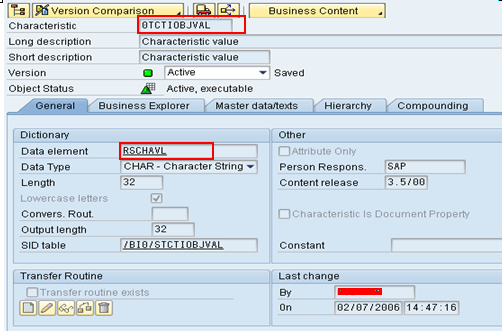 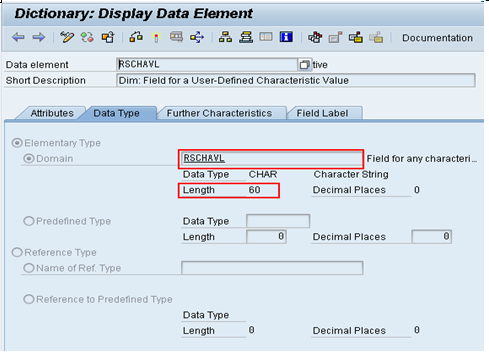 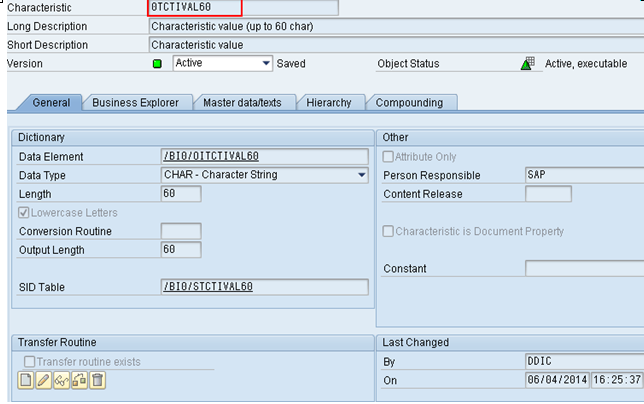 They previously had the type CHAR60 and still have same type post upgrade. As a result, all objects that use these two characteristics together are still executable. However, they work only for applications that have characteristic values no longer than 60 characters.

During SUM tool runs, the XPRA program RSD_XPRA_REPAIR_0TCTIOBJVL_740 which copies the contents of the SID table from 0TCTIOBJVAL (/BI0/STCTIOBJVAL) to the SID table of 0TCTIVAL60 (/BIO/STCTIVAL60). 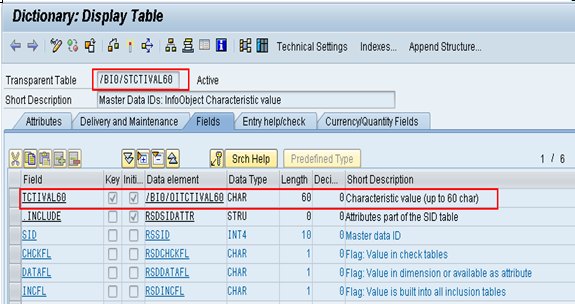 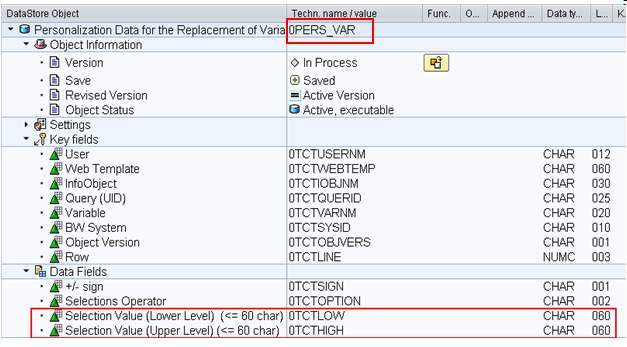 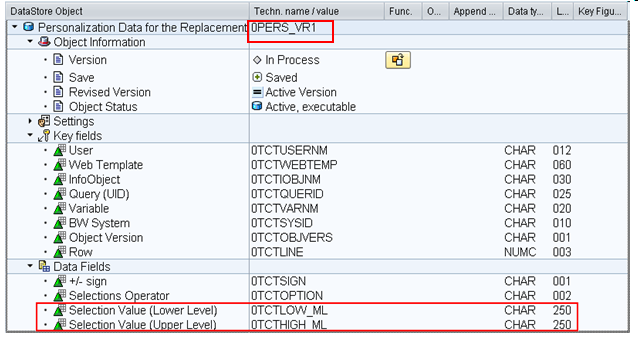 The program RSD_XPRA_REPAIR_0TCTIOBJVL_740, activates the new DSO, and copies the contents of the previous DSO 0PERS_VAR to the new DSO 0PERS_VR1. Then, the personalization should work as usual.

The programs that run during the upgrade activate new objects and, if necessary, copy data from old objects to new objects. However, they do not delete obsolete objects. The DSO 0PERS_VAR for storing the personalized variable values is no longer used.

The database tables RSECVAL and RSECHIE that store analytical authorization objects are no longer required. 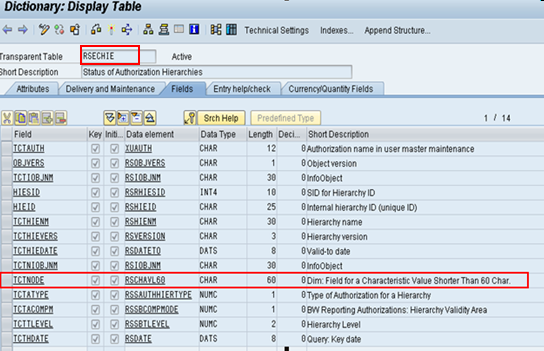 The program RSD_XPRA_REPAIR_RSCHAVL_740, copied to the table RSECVAL_STRING or RSECHIE_STRING. If that has been successfully executed, we can delete the contents of the tables RSECVAL and RSECHIE. 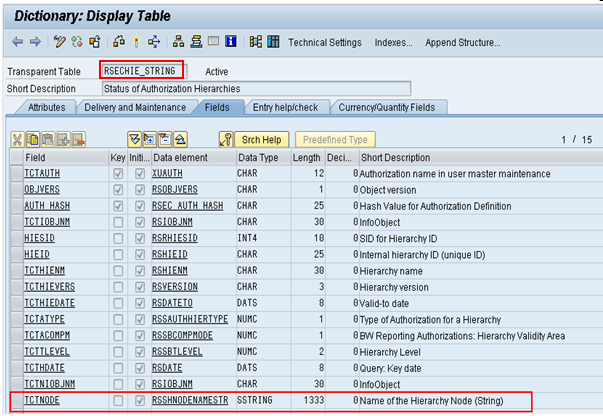 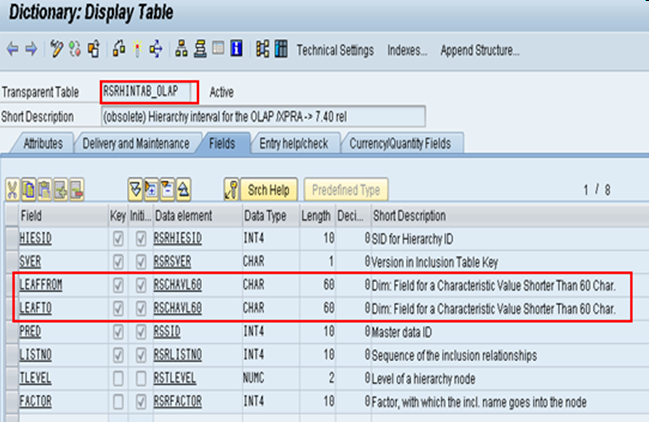 In SAP BW 7.4, the domain RSCHAVL was changed from CHAR 60 to SSTRING 1333. As a result, data elements that use the domain RSCHAVL are “deep” types in an ABAP context. Therefore, some ABAP language constructs are no longer possible and it will give syntax errors or they cause runtime errors in customer-specific programs.

Texts with a length of up to 1,333 characters are possible for characteristic values. For this, the structure RSTXTSMXL was created which is a “deep” type in an ABAP context. In the internal method interfaces and function module interfaces that handle the texts of characteristic values, the type RSTXTSML was replaced with RSTXTSMXL. However, the RSRTXTSML structure remains unchanged and is required for the description of metadata.

The change should have little effect on our programs. We must expect problems where we operate on characteristic values that are assigned with a generic type in case of variable exits or where we call SAP-internal functions or methods whose interfaces were changed by SAP.

Most of the problems are syntax errors that result in a program termination. We can use the Code Inspector Tool to systematically detect and resolve these problems. We can run Code inspector program as a check both before and after the upgrade. It will show us the things that need to change as per 7.4 versions. 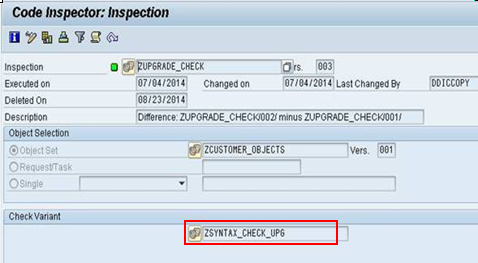 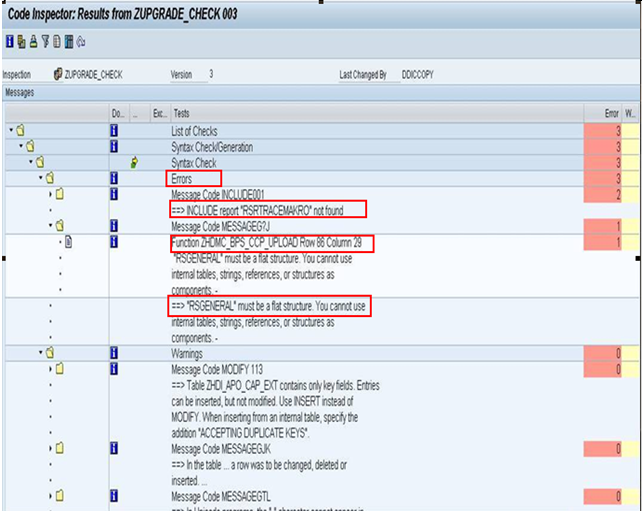 The include ZXRSRU01 and the function module EXIT_SAPLRRS0_001 will not analyzed by the Code Inspector. This include must be fixed by ABAPER from SE38.The point we should remember is that we should use keyword ‘Type’ instead of ‘Like’. There will be RRRANGEEXIT complex structure after the enhancement; so we should use TYPE instead of LIKE.

During pre upgrade the structure is given. 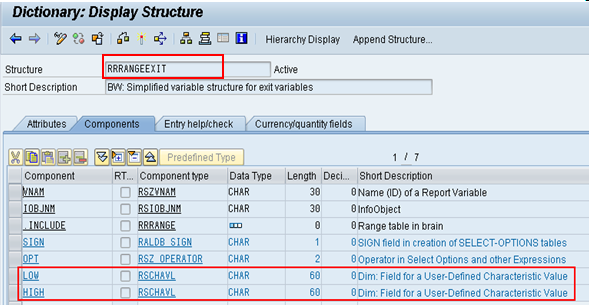 Similar with Function Module too:- 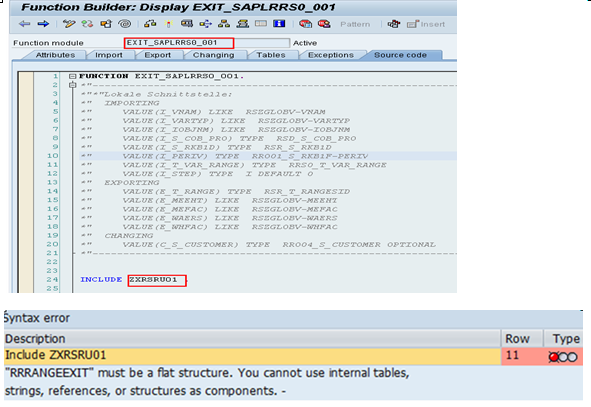 These are the ABAP code change should be done by an ABAPER after BW 7.4 Post upgrade.

Please refer to SAP Note 1823174 for info about all changes in 7.40 SP02 that can affect customer-specific programs (e.g. variable exits):