Crushed Piece of Paper {don’t throw that idea just yet}

For many, a crushed piece of paper is just what it appears to be…worthless! For a moment let’s say that a particular such piece was supposedly thrown away by a legend genius [an artist, a writer, a poet…] containing his/her thought scribbles; suppose you came across this piece. Instantly the value of that crushed little piece of paper becomes priceless. Such is the potential of many ideas we as people in the ‘creative’ space throw away; but from another’s perspective, it just could be ‘the big idea’. 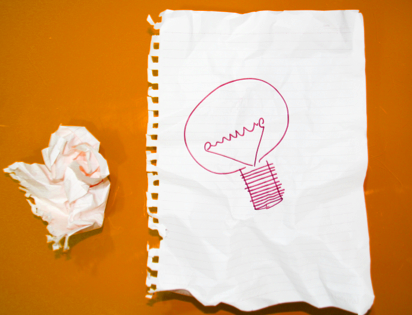 Over the last decade that I’ve been in the design space, leading a team of complex species called ‘a designer’; the common experience has been that most designers believe that they can better their earlier idea, thereby junking a lot of the (potential) ideas. While it is possible that every successive idea could be better, in the process, a lot of time gets spent (and not wisely invested); as every businessman would agree that no matter how great an idea is, it becomes redundant and loses meaning after a given time. The challenge here is to really tap the potential of the numerous ‘junked ideas’ look it at in a new light and sometimes just present them to your prospect. There’s a great chance your prospect would love the idea and it makes great business sense.

For a few years now, one of my activities when leading a creative team involves, delving and scanning through every thought/scribble that a designer has come up with and a lot of times, one of those ideas that would have been junked did become the ‘best seller’ with our clients. And, this is not a one-off situation. This trend has been observed with projects across design disciplines, irrespective of the scale of the project and with a diverse set of designers and clients.

Don’t throw away your idea just yet. Go on, start looking into all you thought was junk, and if you do share a similar experience, post them here!

Great post! This rings bell with one of my customer projects too.  There were teams coming out with brilliant ideas and solutions that were indeed great but required more time to implement.  Our customer wanted something that can be implemented quickly.  The teams had to revisit a whole bunch of ideas which they thought were redundant, but took a few (dark horse ideas) and flipped it in a way that they came with simple, acceptable and quickly implementable solutions.

Yes... don't throw away any ideas.  Put it in an Idea Bank.  We can use it anytime later.