A View of the New Stadium

Earlier this week I was fortunate enough to attend the 8th annual San Francisco 49ers Pasta Bowl. In year’s past, the event has been held at the Santa Clara Convention Center. This year the event was held at the brand new Levi’s® Stadium. In fact, this was the very first event to be held at the new stadium, which opens next month in August. 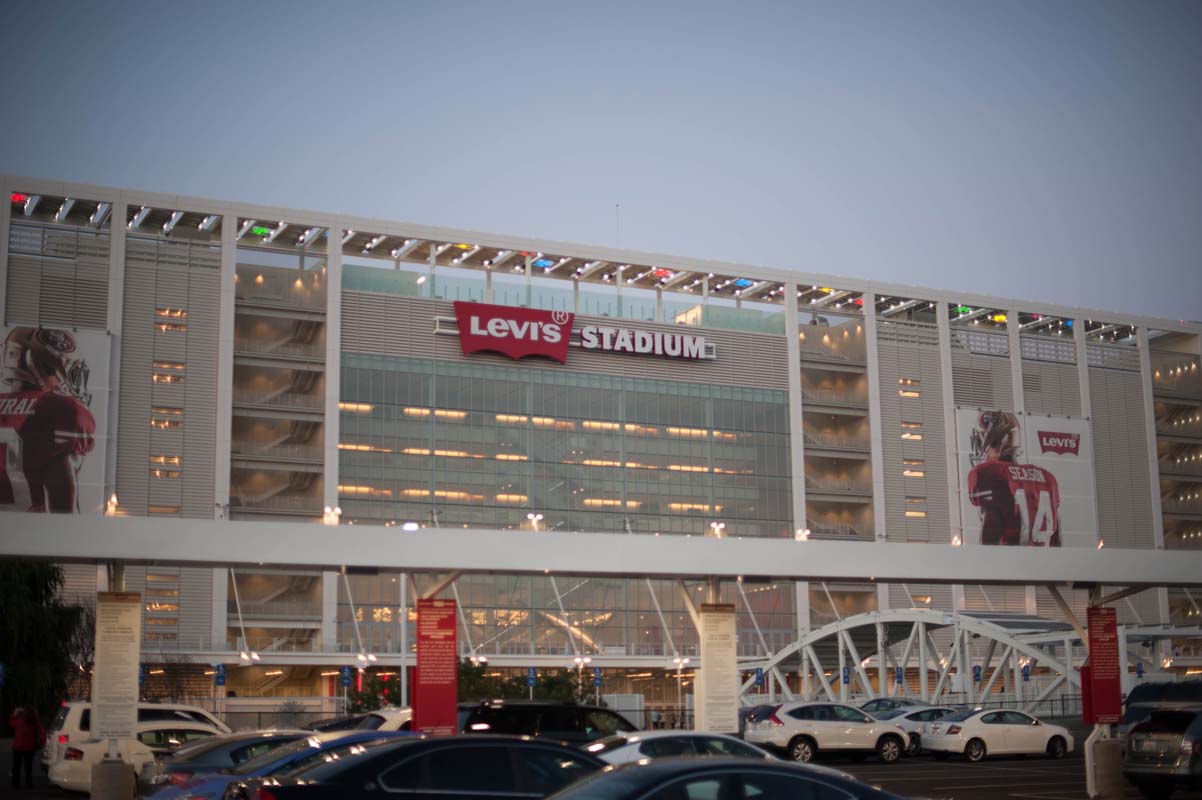 Walking into the new stadium

SAP is a partner and a sponsor of the 49ers. We work with them on software development and applications as well as sponsor their stadium. The 49er’s workout facility is actually named the SAP Performance Center and is connected directly to the stadium. As part of our agreement with the organization, SAP was the title sponsor of this year’s Pasta Bowl. 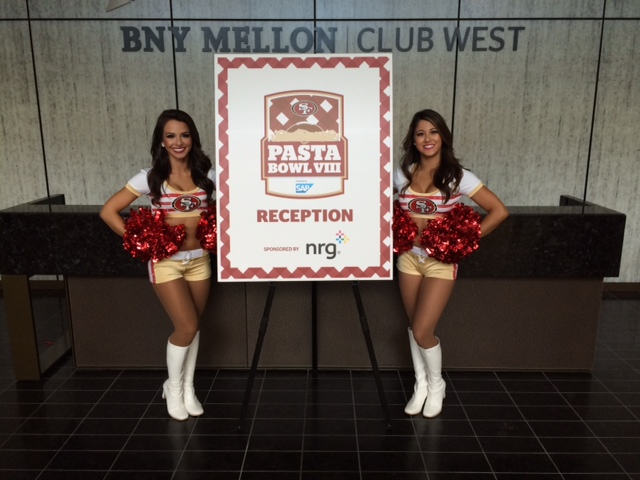 The reception started in the BNY Mellon Club which is located indoors right behind the 50 yard line. Attendees were encouraged to step out on the patio right at the 50 yard line to have their photos professionally taken. Just like last year, there were a number of vintners spread around the club providing tastings of their wines. Martinelli Winery quickly became my favorite. Check out their tasty zinfandels. The Gold Rush Cheerleaders mingled with the crowds selling raffle tickets for games, nice bottles of wine and even a trip to Arizona for the Arizona vs. Niners game. 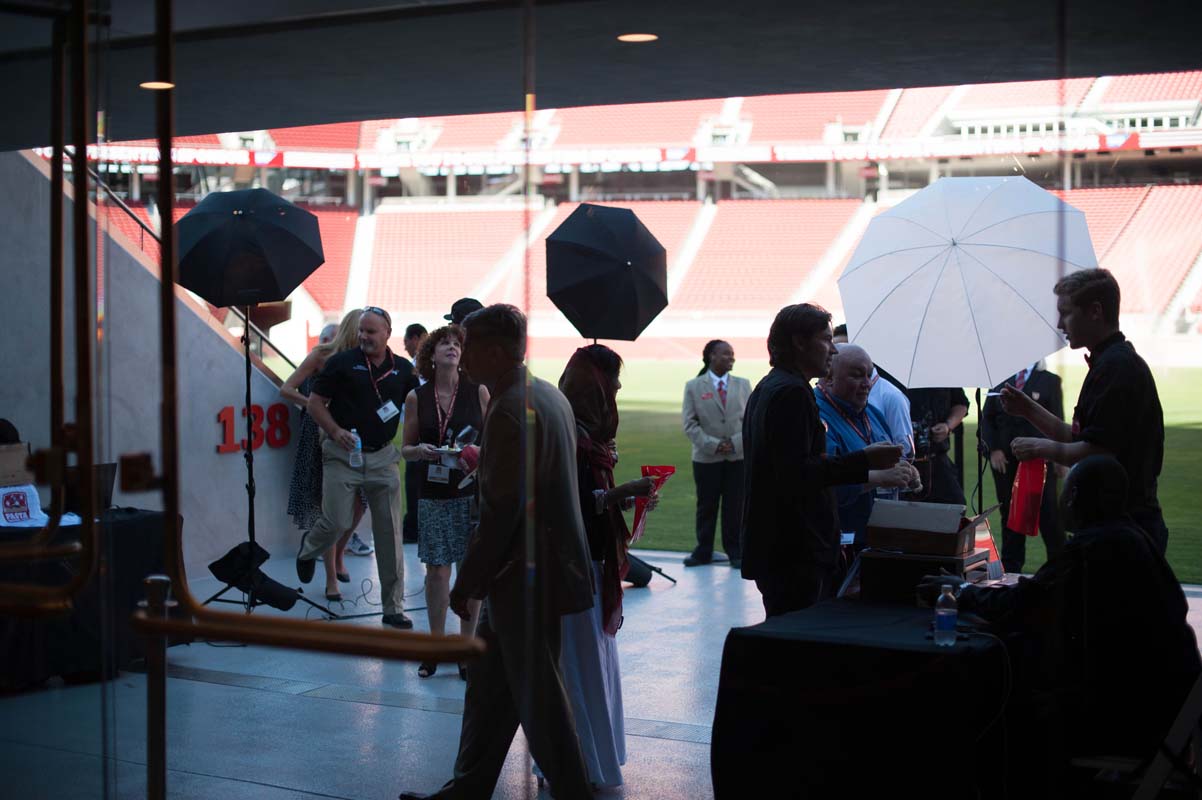 Setup for getting your picture taken on the 50 yard line

After the reception we were escorted up one level to the Champion’s Club. The Champions Club is the largest indoor club space at Levi’s® Stadium. The club runs the entire length of the field and accommodates direct views. Heading into the event, I had zero expectations on which players or staff would be placed at SAP’s two tables. Incredibly enough, at our end of the table, we were fortunate to sit with 49er’s quarterback Colin Kaepernick and 49er owner/CEO Jed York. Before the mob of attendees descended upon Colin, those at our table were fortunate to get some nice photos with him and actually converse with him. As the evening wore on, hordes of attendees descended upon Colin to get photos and autographs. It got to be too much and security eventually escorted Colin out of the Champion’s Club while the event continued on. 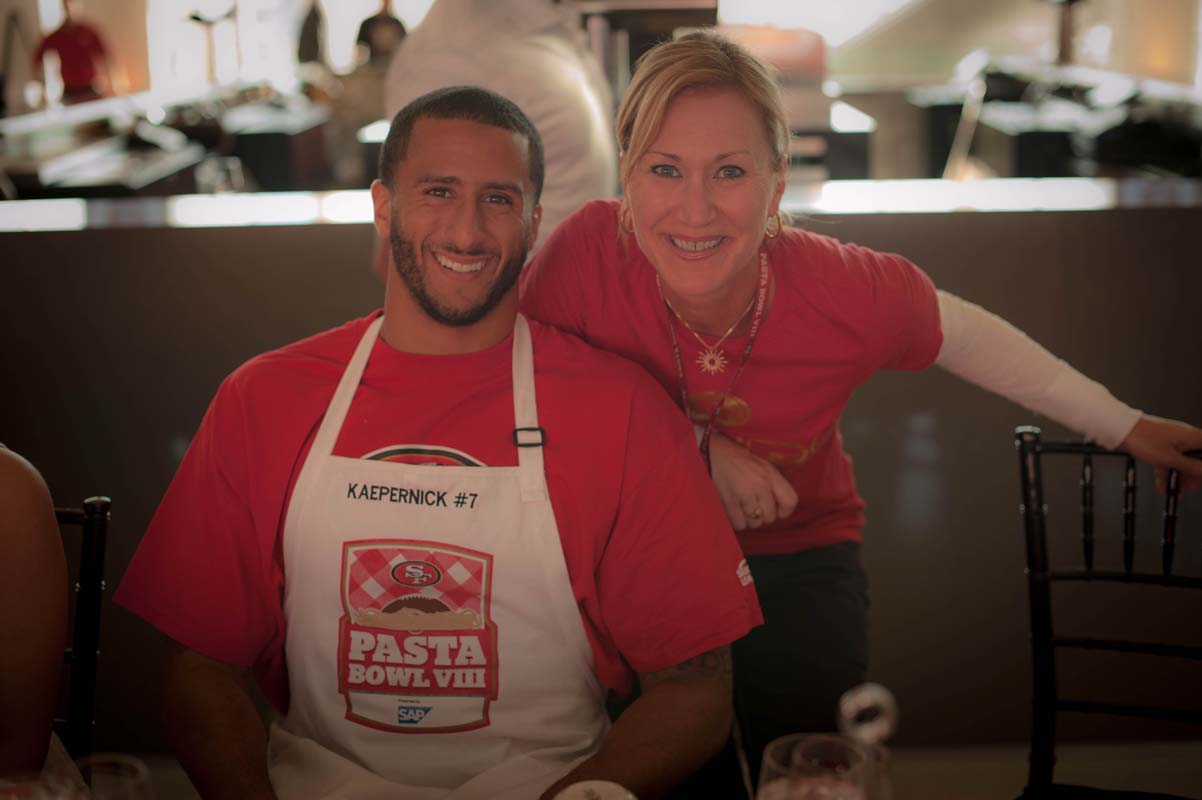 The author with #7, Colin Kaepernick

Levi’s® Stadium is beautiful. When it opens next month, the stadium will be the first United States professional football stadium to have achieved LEED Gold certification. Visitors and guests may view a live dashboard display featuring current energy measurements, water and air monitors and other dynamic green features as the building operates daily. Other sustainable features include: 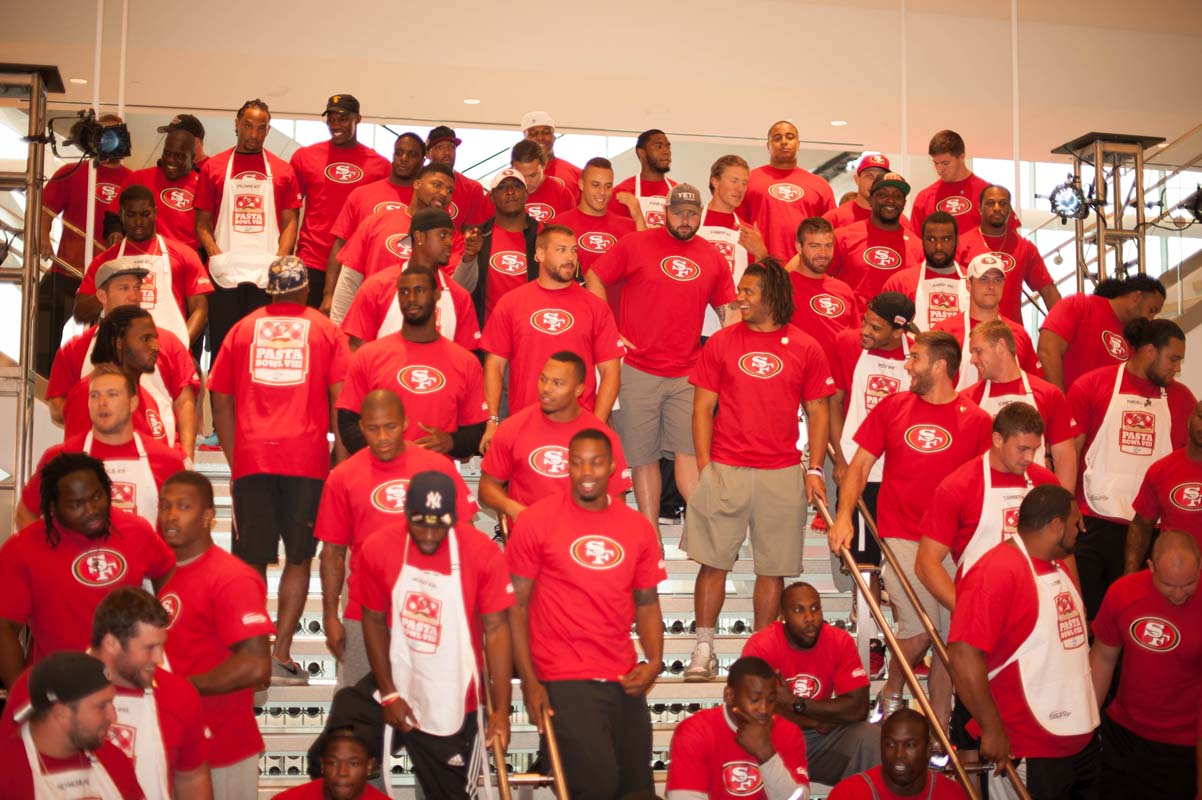 Players getting ready for a group photo 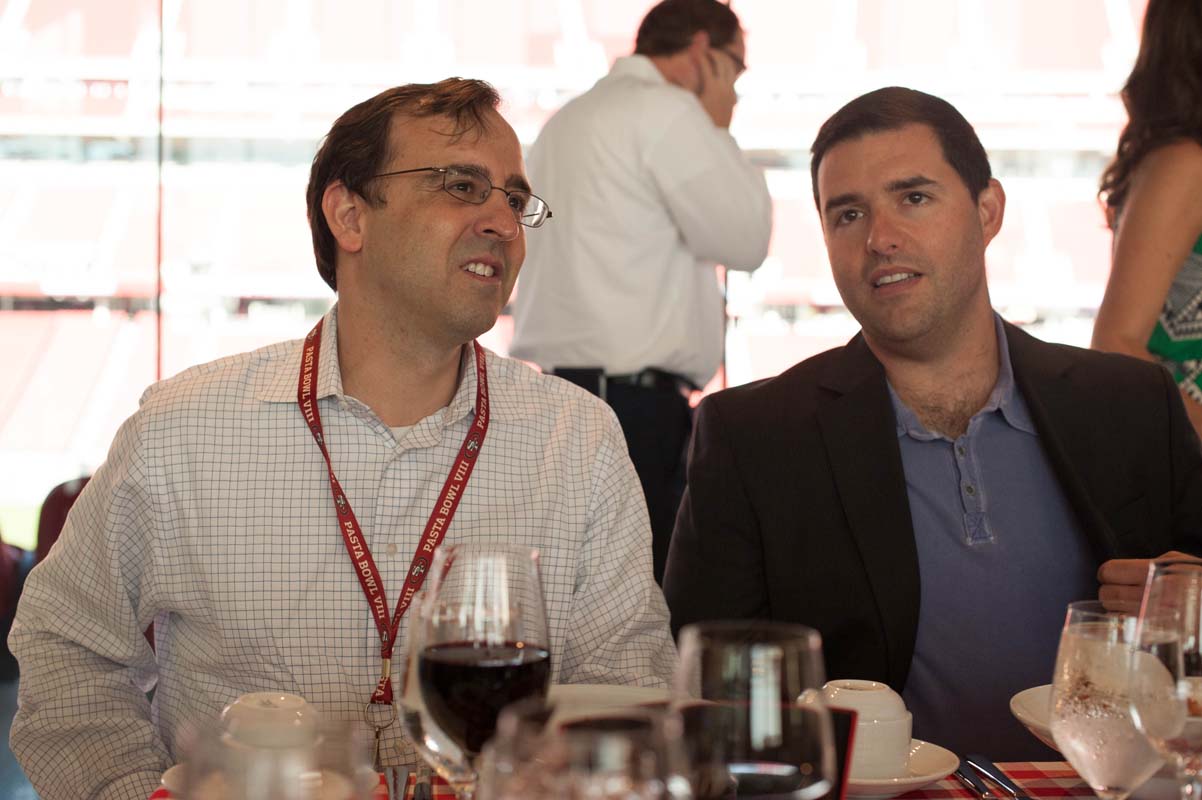 If you aren’t planning on attending a game or an event at the stadium, you might consider scheduling a tour of the facility. The entry fee is considerably cheaper ($25/adult)! 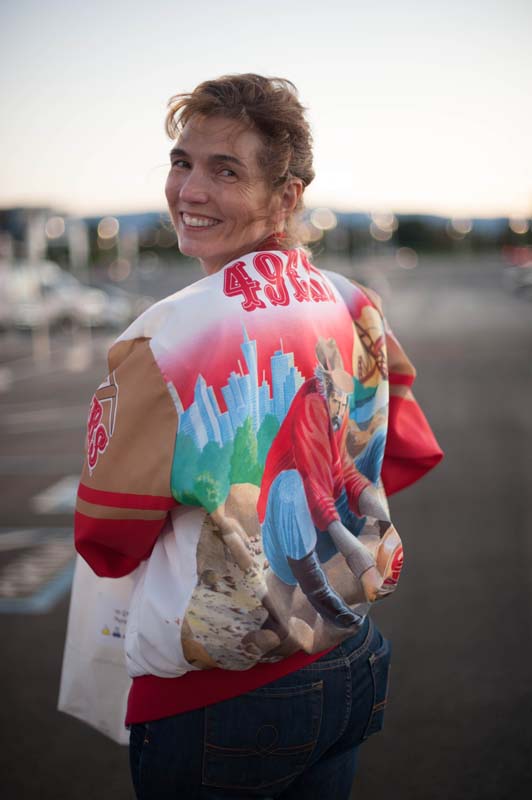 thanks for this awesome glimpse of the new stadium in Santa Clara.

And wonderful that you support so many great causes in your role at SAP. Pasta Bowl sounds fun every year.

My fav picture: The author with #7, Colin Kaepernick

Thanks Natascha! I, too, love that photo of Colin and me. He has such a genuine smile! Glad you liked the article and photos.

You look lovely in the picture~

Sounds like a great event! Really enjoyed this posting!

sounds like you and I need to get ourselves to the Pasta Bowl next time. If only we had a connection :-).