Since our last blog published in January 2014, the following publications have been issued by the IASB:

IFRS15 sets out the requirements for recognizing revenue that apply to all contracts with customers, except for contracts that are within the scope of the standards on leases, insurance contracts and financial instruments.

The main questions are when to recognize revenue and how much revenue to recognize. The core principle of IFRS 15 is that “an entity recognizes revenue to depict the transfer of promised goods or services to customers in an amount that reflects the consideration to which the entity expects to be entitled in exchange for those goods or services”.

IFRS 15 establishes a comprehensive framework, based on a five-step approach:

In addition, IFRS 5 provided extended guidance (the new standard together with the application guidance, illustrative examples and basis for conclusions have more than 300 pages) to assist companies in applying the revenue framework to certain areas (e.g. warranties, licensing, repurchase agreements …).

What will change from existing practice?

According to the IASB, for many contracts such as straightforward retail transactions, IFRS 15 will have little, if any, effect on the amount and the timing of revenue recognition. On the other hand, for some contracts such as long-term service contracts or multiple-element arrangements (e.g. telecom operators), IFRS 15 may result in substantial changes to the timing of revenue recognition.

Even if the effective date is still distant, companies should carefully assess the impact of IFRS 15 as soon as possible. In some cases, changes may be required to processes and IT systems to comply with new model and / or new disclosure requirements.

This new standard deals with rate-regulated activities where an authorized body (usually depending from a government) regulates the supply and pricing of particular types of activity by private entities, including utilities, telecommunications or transport. These regulations are often designed to allow the suppliers to recover specified costs and other amounts through the prices they charge to customers. However, rate regulation is also designed to protect the interests of customers. Consequently, the rate regulation may defer the recovery of these amounts in order to reduce price volatility. The suppliers usually keep track of these deferred amounts in separate regulatory deferral accounts until they are recovered through future sales of the regulated goods or services.

IFRS 14 is an interim standard that allows first-time adopters to maintain these deferral accounts until the comprehensive rate-regulated activities project (started by the IASB in 2012) is completed.

The impact of IFRS 14 will be limited, firstly because it only covers those specific activities. Furthermore, this standard only applies to first-time adopters (i.e. entities that will publish their first IFRS financial statements from now).

For intangible assets (IAS 38), there is a rebuttable presumption that a revenue-based method is not appropriate. But this presumption can be overcome in the following circumstances:

Compared with the previous version published in our last blog, one of the major projects (revenue) is now ended and does not appear any more on the Board agenda. 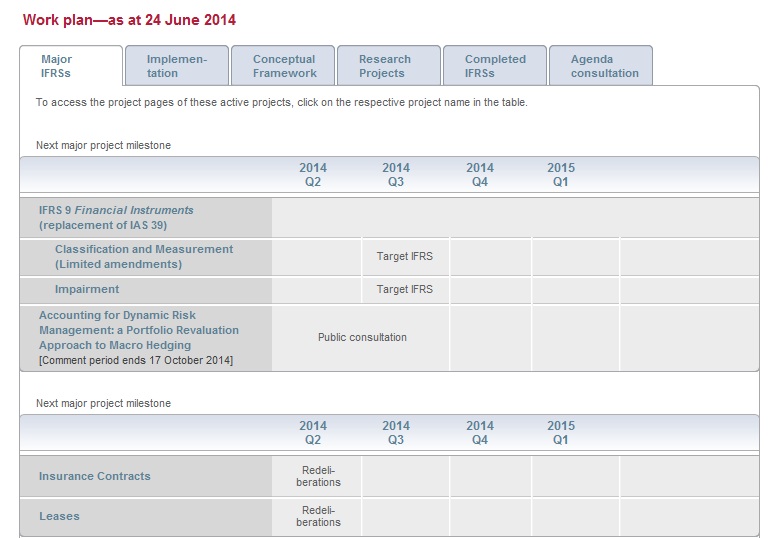 The remaining major projects are:

In addition to these major projects, the IASB works on many other topics. Some publications are planned for H2, 2014:

We will get back to these projects in our next blog. Stay tuned!

I am interested in IFRS 15 - Revenue with contracts from customers.

It would really help us all if you could provide answers to the following questions.

Has SAP updated the applications affected yet?

Is there documentation available for these?

Is there any training/certification available for IFRS 15?

I'm only in charge of starter kit delivered on top of SAP Financial Consolidation, I cannot answer for other SAP applications. As regards FC, no change is needed as IFRS15 may modify the amount and/or the timing but does not affect the accounting schemes used for revenue recognition.