First of all congratulation for Germany on WorldCup 2014 in Brazil, my country. I know Germany defeated Brazil playing football, but that is not big deal.

That above is because I am glad that SAP is also contributing to football worldwide. Gremio Football Porto Alegrense is a club formed in 1903 by German settlers in South of Brazil and now more than 100 years after German is providing a software that aims to improve team tatics by monitoring actual players movements and providing accurate information immediately. Gremio is the first brazillian football club to acquire it.

In the video bellow former player talks about the software:

Germany took some cameras and analized its football data while training in the time World Cup took place, actually they were already doing it before.

The germans believes that success in football is reach 50% due to tatics and 50% by chance. So I hope Gremio can be as successful as Germany National team by improving its playing tatics. 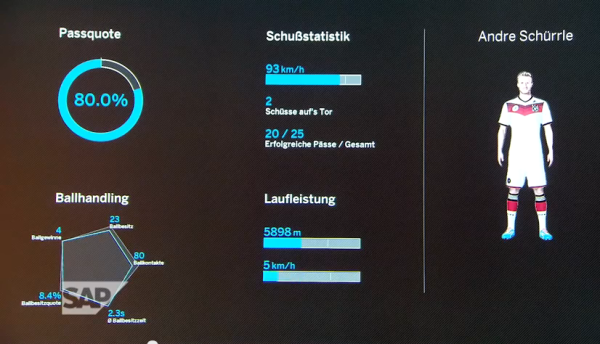 Hope that will help our "tricolor" to win next Libertadores 🙂

Really nice to see how SAP's software helped and is helping customers' teams.

In nowadays football, where every detail is crucial to win matches, this is becoming a game-changing tool.