So after some time at home (parental leave, etc.) today I want to share with you, how and where to change behaviour in the approval procedure easily if you are able to do coding (or in this special case insert the code).

I will not get into approval procedure detail, more information of the this can be found here f.e.:

Standard behaviour:
When using the approval procedure in Change Request Management with more than one approver, the Request for Change is only rejected after all approvers have voted, meaning executed their approval step.

This is the standard behaviour taken over from CRM standard.

The advantages are that all approvers know about the Request for Change and that it might be more convenient that if this has to be clarified with the rejecters, you know all of them in one step.

The disadvantage is that you have to wait until all approvers executed their decision until you get feedback because the Request for Change will nevertheless be rejected.

I was shortly contacted by a customer asking if this could be changed.

The customer wanted that the first reject leads to a general rejection of the Request for Change because it doesn’t make sense for him to wait until others rejected, too. I assume they have a process which allowed to go again into approval from ‘Rejected’ which might not be a ‘FINI’ status at all. But that’s a guess.

Here is now how the behaviour can be implemented: 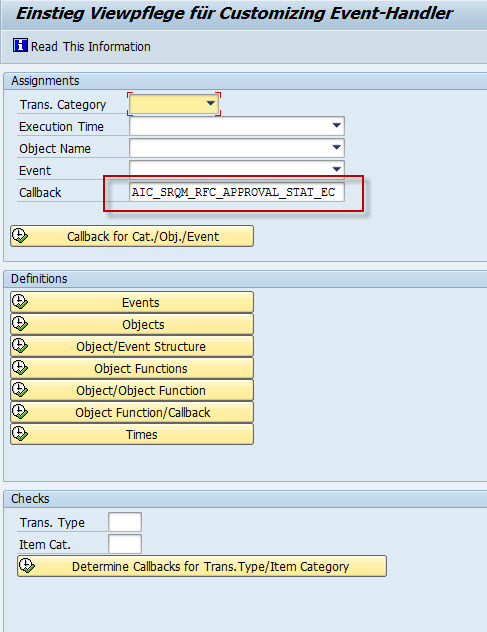 There function modules are registered to be called by specified events, like save of the CRM document, etc.

Enter the function name ‘AIC_SRQM_RFC_APPROVAL_STAT_EC’ and press ‘Callback for Cat./Obj./Event’.

You will see that the function is registered to run on the event ‘AFTER_SAVE’ if for the object ‘APPROVAL’ the attribute ‘STEP’ has changed. 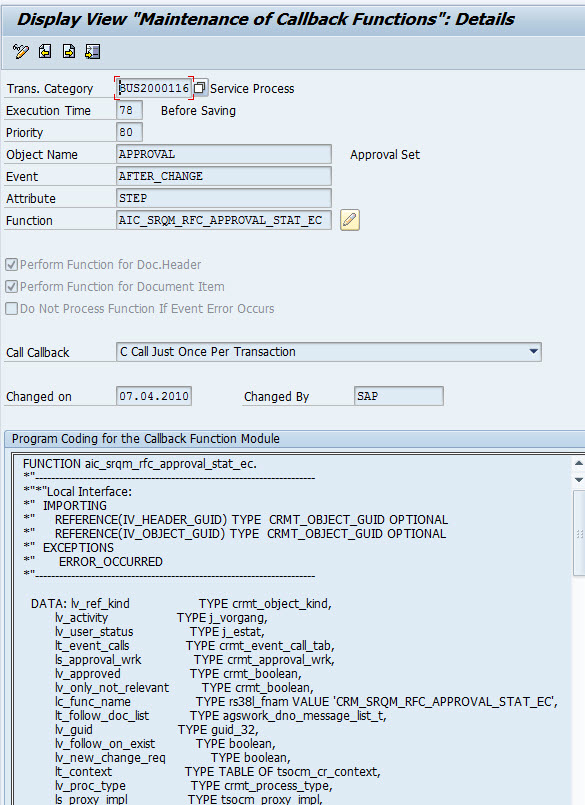 To do so, call transaction ‘SE37’, copy the function to the name stated above to an existing function group of your choice and save everything in your transport. Be aware that the top-include of your function group needs the includes

so the copied function module is syntax free.

Then replace the code listed in the screenshot with the code further down and activate everything. 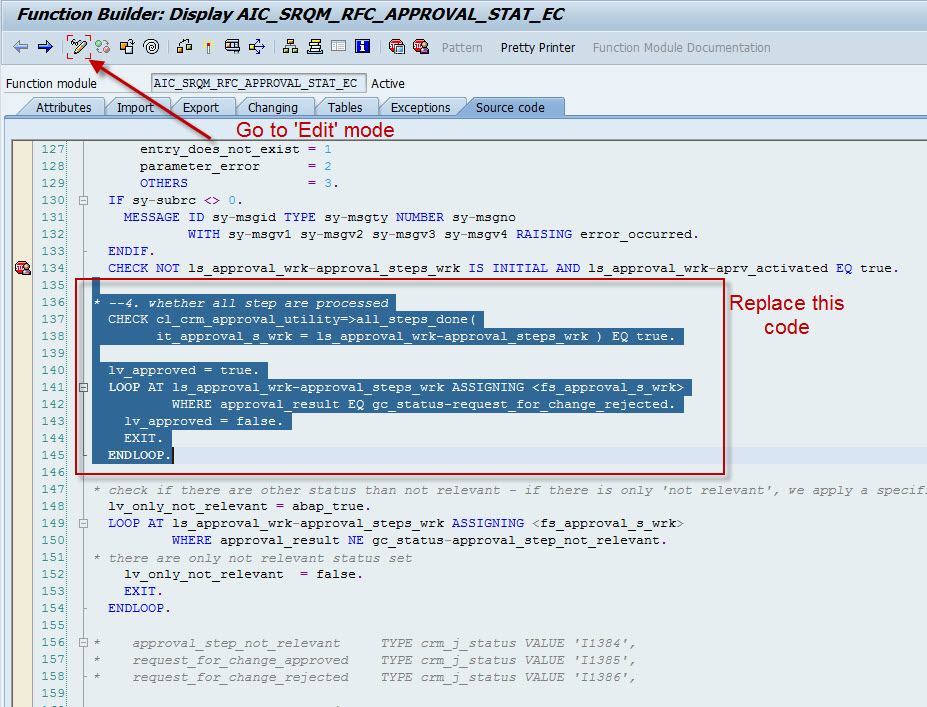 * –4. whether all step are processed

Afterwards register this function in the CRM Event Framework by going into ‘Edit’ mode and entering the new function name. 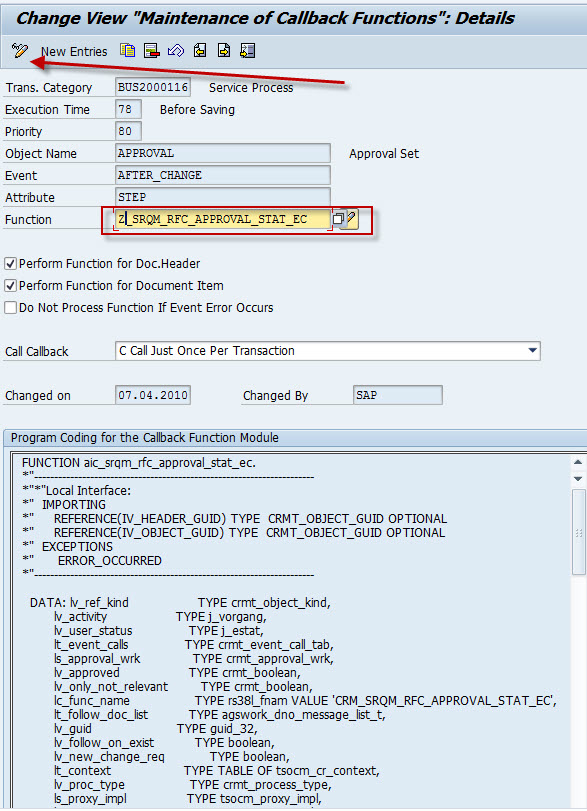 That’s all. Now the new function with the changed code is called and the Request for Change is set to ‘Rejected’ when the first approver rejects his approval step.

By the way,  if you are familiar with the Basis Enhancement Framework ,it is as well possible to replace the code directly in function ‘AIC_SRQM_RFC_APPROVAL_STAT_EC’, then you do not have to change the registration of the function in the CRM Event Framework. So, hope that helped a bit if you find errors, get in contact with me,

Thanks for sharing and welcome back. I was missing some codes here 😉

Welcome Back Michael, we have been missing your blogs for quite some time now 🙂

This is really useful tip you have shared and I will try to implement this using whatever the little ABAP knowledge I have.

Hi Vivik, thanks for the flowers :-). I would like to post more but we are all busy here with 7.20 Solman release. That is as well, why I am keeping a low profile here 🙂

this is good, if this is the preferable procedure and also most of the customers need, can we achieve this by delivered SAP NOTES corrections

because as Vivek mentioned we have very limited ABAP knowledge, if this suggestion released as notes then easy to follow.

Hi Jansi, a good idea. I have forwarded this to my product owner, so he can check this.

I will update you if the decision is done,

Hi Michael, Welcome back. great to see the coding post.

HI Michael, just found this now, glad you posted our idea about this type of rejection, we have been using it and it works great.

Thanks again, keep up the great work

Hi Dimitry, thanks for the 'flowers' and have a nice day.

Hi Michael, thank you for this post. I have implemented all settings and code you've posted.

But I've faced with error in my system. In case of scope extending and already created change document(s) in processed RfC when I try to reject approval my RfC goes to Approved status instead of status according to rejected one. It seems like system ignores FOLL_REJ settings

Michael, sorry for disturbing you, but I really need in you answer!

Hi Dimitry, please open up a customer message as no analysis can be done without system access. SAP support will analyze this issue,

Hi Michael, I'm afraid that they will refuse my request as I've changed it according this post and now it is Z-functionality

please try it, it might go in the consulting direction but no try no gain ;-).

I am sure you understand that an analysis is not possible from here.

unfortunately AGS can not resolve this issue. If you have access to SAP AGS system you can look at 417155 / 2015 Message. I think - it is the error in SAP SM that doesn't resolved now!

Hi Dimitry, I checked the message, this is a bug and has to be fixed. Can you open up the message again, so I can take over or send it to the relevant colleague?

You can request this is routed to me. I will fix this myself if my colleague does not take over before.

Hi Dimitry, as there has started a discussion internally, I have to be more specific with my communication to you. The only bug I see is this one:

if the scope is extended and all the change documents already created are in status 'Withdrawn' and then the RfC scope is 'Rejected', the RfC should go to 'Rejected' in  standard, meaning choosing the 'FOLL_REJ' way. But we will continue this discussion in the message now as this is not the correct place to do it 😉

Thank you for the great post. I have a similar requirement and I believe I can use your post to get it sorted.

Hi Sudarshan,
one way would be to implement a ChaRM check that is assigned to the status in which the rejects leaves. In the Standard Transaction type this would be 'In validation'. The check should check if the approval procedure is closed and if yes, check if the rejected steps have a comment left. This would be quite generic.
Another way would be to do an Extension in the CRM approval procedure assignment block field 'Comment' itself. You could Change the Attribute dynamically to 'mandatory' for the field in case the value is rejected in the CRM UI buffer. This has to be done via tx BSP_WD_CMPWB, for UI component 'BT_APPROVAL' but you should maybe check the transaction type first because this component is as well used for other Transaction types like the SMIR (IT Requirement).
Check out the context of BTAPPROVALSTEPS Base Entity BTApprvalStep. For the Attribute STRUCT.PROCESSED_BY you Need a getter method. You can create this by right-clicking on the Attribute. I am not sure but I think the method is GET_P_PROCESSED_BY where you have to do it.
Do your logic and then decide...

Thank you for this blog. It is very helpful for ABAPers to work on such kind of requirement.

Actually, I have got the same requirement from client to add Rejection step in the standard workflow of Change Request Management. Initially, I tried based on Events of Business Object, but it didn't work out.

Then, I have found your blog so I have implemented all steps as mentioned in a blog to set the status as 'Rejected'. But it is not working out. We have 4 level approval.

Following are the observations related to Rejection testing.

1. When L1 - Approver is rejecting the RFC, the decision is being registered as rejected.
2. However contrary to point no 1, instead of the RFC being Rejected and closed, it is getting approved directly. and the status of the RFC is changed to "Approved.". The RFC is not sent to the next approver for their approval. i.e. rest of the workflow (for approval process) is getting skipped entirely.
Also, attaching document for your reference containing test cases performed for Rejection, 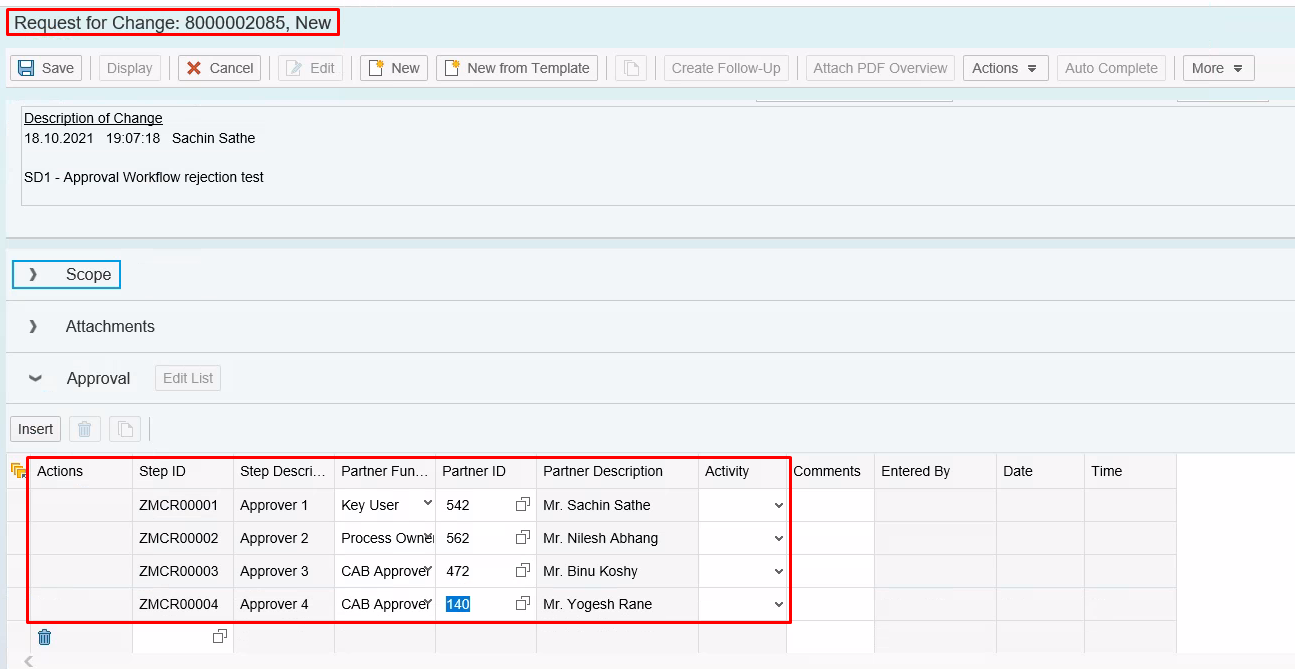 We have made a copy of standard workflow and made the changes, I have added the new event as 'CANCELLED for Rejection. For Approval, it is working correctly.
Please suggest suitable solution for the same and let me know if any additional information is required,
/