Last week, my publisher released my latest book: Apache Cordova API Cookbook (www.cordovacookbook.com). The book is available in print form from Amazon.com, InformIT.com and several other online retailers. For those who like electronic books, you can buy an e-book version from those vendors as well as Apple iBooks, Google Play Store, Kobo and more. You can learn more about the book and access links to the book in the different online stores at www.cordovacookbook.com. 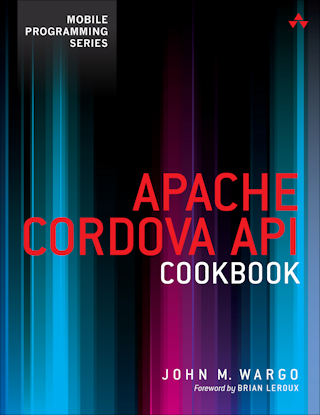 In 2012 I published PhoneGap Essentials (www.phonegapessentials.com). The book covered PhoneGap 2.0 and delivered complete coverage of everything a developer needed to know to get started with PhoneGap development. At about 300 pages, it covered the topic pretty thoroughly. If you look at PhoneGap Essentials, the first half was all about the tooling available for PhoneGap development, and the second half was a complete study of the PhoneGap APIs.

As the book was going to press, Nitobi was acquired by Adobe and PhoneGap eventually became known as Apache Cordova.

In December 2014 I published an update to PhoneGap Essentials called Apache Cordova 3 Programming. This book covers Apache Cordova 3.0, PhoneGap 3.0 and was essentially a rewrite of the tools part (the first half) of PhoneGap Essentials plus a 50-page chapter on the Cordova APIs. Things had changed so much between PhoneGap 2 and Cordova 3 that an almost complete rewrite was needed. Unfortunately, this book is only available in e-book format; you can find more information about the book at www.cordovaprogramming.com.

When you bundle Apache Cordova 3 Programming together with Apache Cordova API Cookbook, you get almost 600 pages of coverage for the topic. No other books provide the same level of detail on the topic.

If you’re doing any Cordova or PhoneGap development and need help getting started (or just want access to everything I know about the topic) please pick up copies of Apache Cordova 3 Programming and/or Apache Cordova API Cookbook. I’m planning on presenting at d-code in Las Vegas and Berlin, and I’m hoping to have a few copies to give away at my sessions.