Over the last few weeks, the world remained riveted to the various games of the World Cup 2014.  Some were early disappointments such as Spain; however, many were surprised just how far their own country made it into the final tournament.  Social media and mobile engagement were also big winners in the 2014 World Cup.  These channels are immensely popular today and will continue to grow in influence as they are now part of most people’s daily lives.  Both Facebook and Twitter had set usage records during the World Cup final.  In fact, the Wall Street Journal article noted that Twitter beat its own record of 580,166 Tweets per minute during Germany’s defeat of Brazil in the semi-final by reaching 618,725 tweets per minute during the Argentina – Germany final.

SMS messaging was also quite prevalent throughout the World Cup, but more so around the games.  For the 2014 World Cup, we took a look at each game in terms of SMS traffic interest.  For each hour of the day, each minute, there are, what we call “normal” SMS traffic patterns.  For example in the 18:00 hour, a particular country may normally send x number of messages; likewise, that can be broken down in the SMS per minutes.  While SAP Mobile Services doesn’t see all of a country’s SMS traffic, we certainly see enough to ascertain statistically relevant movements of SMS traffic.  Given that billions of SMS messages move around countries and between countries daily, this clearly shows that SMS as a person-to-person communications medium is still completely relevant and that it will be for the foreseeable future (I am not so deluded as to not admit that SMS has taken a large hit in many markets due to OTT cannibalization; however, for many people, somehow SMS texting still seems more reliable).

By reviewing our messaging statistics before, during, and after the games, we were able to determine the percent above normal spikes in SMS traffic as a result of the World Cup games.  This gave rise to our Textiest Moments of World Cup 2014 infographic: 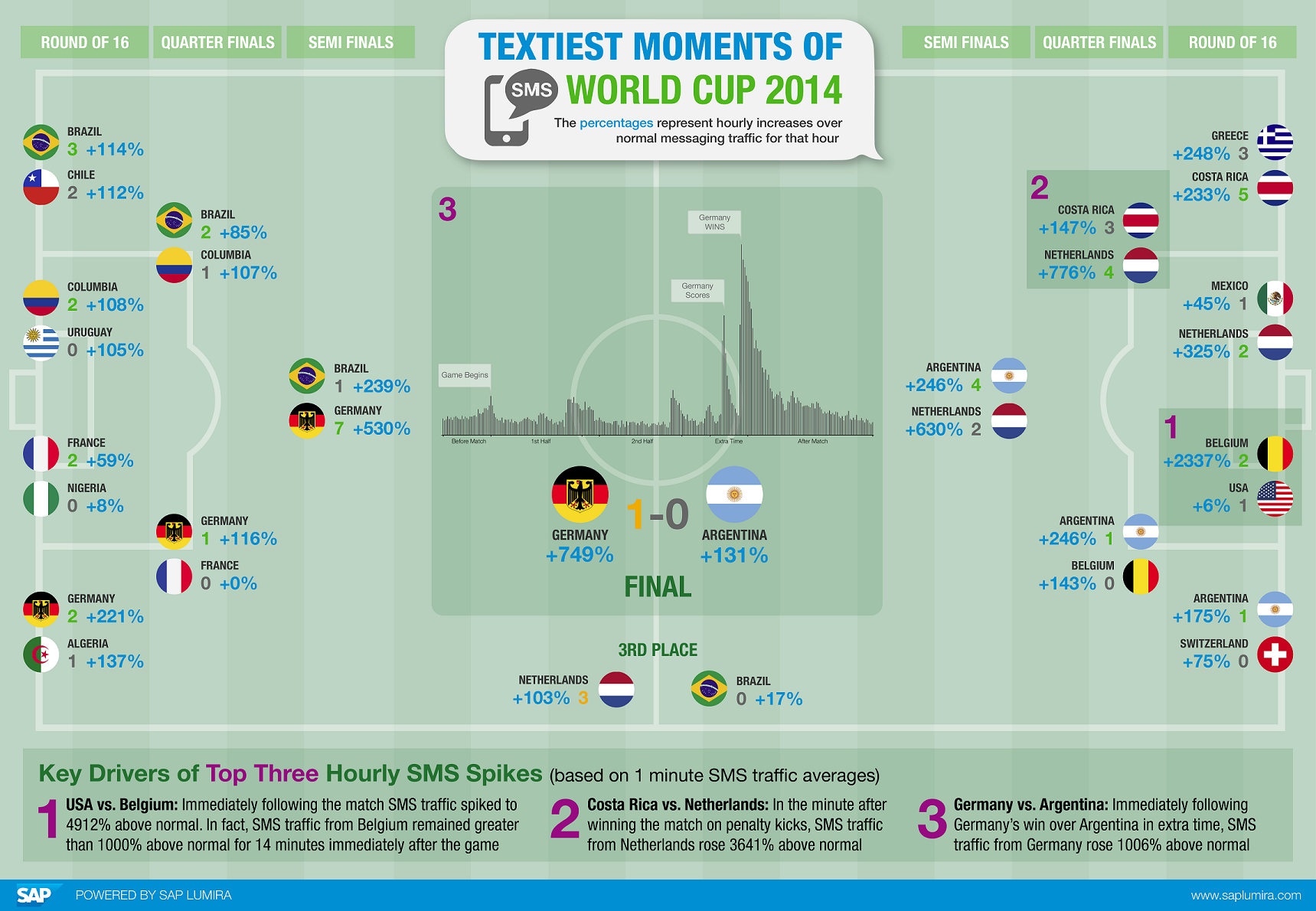 Interestingly, but not surprising, messaging traffic only spiked in countries whose teams were playing. For example, even though Germany vs. Argentina generated world-wide interest, the message spikes were only pronounced for those two countries.  If we start with an estimate of 63 billion SMS messages sent from Germany in 2014 (extrapolating from a Portio Research report) and then do some rough calculations, Germans sent around 1.2 million SMS messages in the minute following their World Cup win (with a normal minute generating approximately 120K messages).

Like Twitter and others, SMS very much tracked the game’s progress.  In the graphic below, for the game between Germany and Argentina, we can see the extreme reactions to the scores and the end of the game. Following the game is a wind-down as people discuss the results with friends and family.

In another example, we overlaid times when yellow cards were issues and the teams’ substitutions along with the goals. In this next example between Argentina vs. Switzerland, the SMS pattern clearly showed increases in traffic immediately before, during the half, and before extra time.  Events such as yellow card issuances and substitutions did not heavily influence the traffic – likely because people were paying attention to the action on the field and not texting.  In fact, if you look back up at the Germany vs. Argentina SMS game graphic, you can clearly see the increase of traffic during the half and at the break before the extra time. 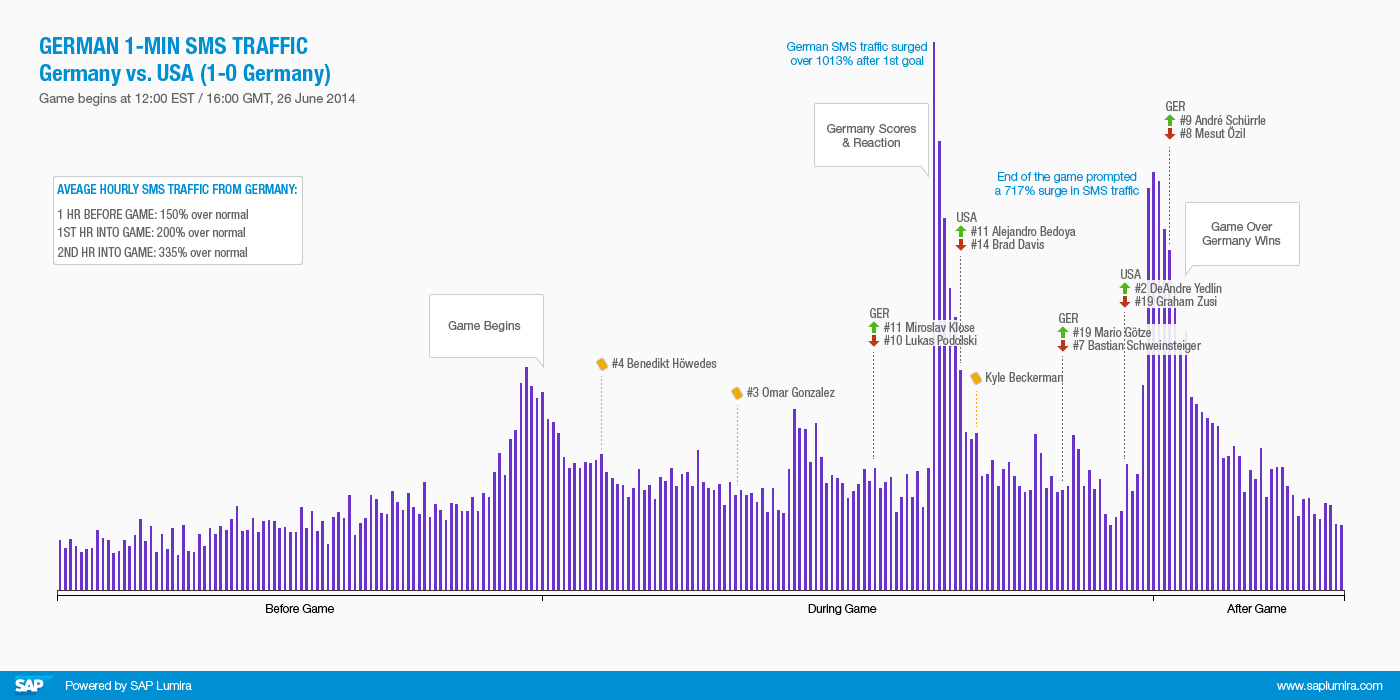 A few observations come to mind.  First off, people only text about the game when there is a definitive break in the action.  Unlike social media, where tweets are sent or Facebook postings made to provide an ongoing narrative or commentary (e.g. one -to-many) about an event, SMS texts are sent to discuss the topic with another individual.  The engagement model is different.  Additionally, in our SMS statistics, we don’t filter out the “background noise” — meaning that there are always unrelated texting going on.  That typically accounts for the “normal” traffic levels and that’s why by looking at the deltas from normal – especially huge ones, you can ascertain the level of reaction.  I will note that some countries had very little SMS increases at all. France was one – the games seemed to not influence traffic patterns away from their hourly norms.  Their SMS traffic actually dropped around the games in some cases.  I’ve not yet come up with why that was.  The US SMS traffic around the games was minor – averaging around 9-10%.  But that is because many in the US simply did not pay attention to the World Cup, but still – that is nice to see and significant.  Four years ago, there would not have been that much of a rise (and there
was much less in terms of competing media).  But this does tell us that SMS-based texting is still extremely relevant and still well used.