Taking my kids to work – Part 2

As promised from part one to this blog I am going to have the good stuff up top this time. Day two it was my 13 year old daughter, Robyn, who spent the day with me and wrote more and took fewer pictures.

(Written throughout the day, completed the following day)

Today, at exactly 6 AM, I woke up. No alarm clocks or anything. I was excited to go to work with dad and see what he does. On the Skytrain, dad explained to me about Lumira, and what Lumira could be used to do. He also explained about how 3D data cubes work, as well as a bunch of other stuff I won’t remember unless I need to. It was a lot of information, but that’s just a watered down version.

Unfortunately, we arrived late because the Skytrain had delays. But when we got there, the most important thing we did was get dad his coffee. Then I listened in on part of a meeting, where a presentation was given that I mostly understood, although I have a feeling that I understood less than I thought I did. Leaving the meeting early, I listened in on another conference in which I don’t even remember the topic. My dad then went through his emails, and the number of them surprised me. It was then that I saw how cool Lumira is. It looks so simple, but you could do so much more with it than with Excel, which I use, and get frustrated with. 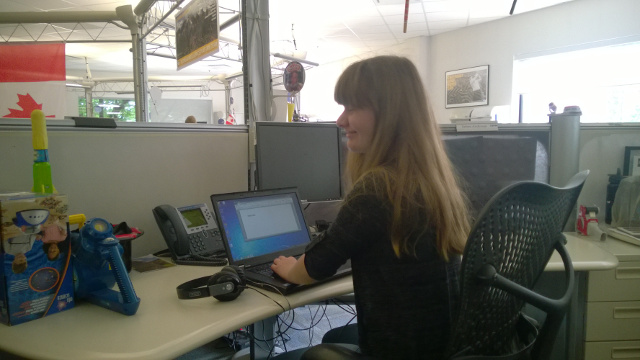 As I started working on this blog, dad finished a case where information in Lumira Desktop, when opened in cloud, was mixed up. He explained that this was a defect in that version of Lumira that was fixed in the new version. Case closed! Now I am just sitting here thinking that writing this is not taking as long as I thought it would.

Getting back from an amazing prawn burger at Yaletown Brewpub, dad let me listen in on a call to a customer confirming that there was a solution to the problem. He also told me that I will make a virtual computer if there is enough time, which I think would be really cool. 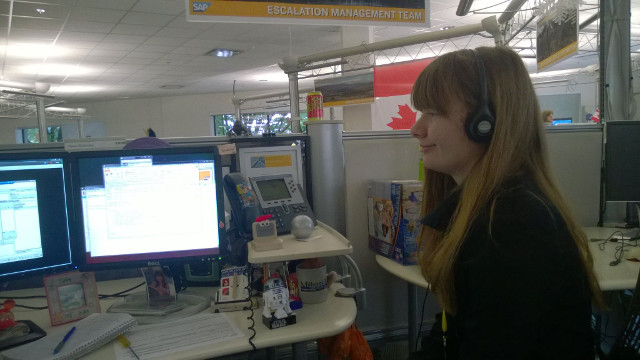 We went out to do the yearly staff picture, and dad insisted I join in, and then we got our ice-cream, which I regretted eating so fast. Coming back, dad wanted me to test a multi-user issue with him. No results, because we found another issue preventing the testing. Now, I am making a 32 bit windows 7 virtual computer, and while I am waiting for it, taking a virtual tour of the data center. Dad says that I will get an actual tour during my grade 9 “take your kid to work day”

Arrow points to roughly where we were standing: After a few complications while making the virtual computer (due to me not getting the ergonomic mouse to work with me), we left to catch the skytrain home. That was the worst transit trip in my life. I don’t know if it was a virus or if it was the prawn burger, but that trip was so bad that a few hours after I got home I was puking. Over 24 hours later I finally attempt to eat.
That didn’t make the rest of the day any less fun though. It was interesting finding out what my dad does at work every day, and learning about computers. I can’t wait for the grade nine take you kid to work day, so that I can do it again. Next time I will stay away from the prawn burger at lunch though…

Well I hope you liked reading this and day one with my Son Owen. I do want to finish up by thanking my fellow co-workers for supporting this experiment, and my family for the efforts they put in. I would also like to add a few of my own thoughts.

First I do have to say it made me feel good that my kids wanted to do this with me. I try to be a hands-on dad as much as possible and I hope this makes them understand what I have been doing day in and day out.

It was also amazing to see how interested Robyn and Owen were in this and how dedicated they were to making the day work out.  Owen really took me literally when I told him to pack stuff in his backpack to occupy himself if needed.  His pack was so heavy and he did not even take one item out of it!  I think this also let me see more clearly how their age difference affects their comprehension of what I actually do and how they wrote (perceived) their day.

If this is something that you are considering to do then my advice is:

I hope you enjoyed reading about our experience, and I hope to do this again, next time with less of my rambling just more of their sharing their day. It will also be neat to see what a year later will make in what they write.

Finally as with all my other blogs please provide feedback or ask questions. In this case to either myself, Robyn, Owen or all of us.

I really appreciated the time that you put into this blog.  It captured a day in the life very well, and it sounds like it was an overall great experience for you (minus the illness).

I hope you get a chance to do this again!