In this post, originally written by Glenn Paulley and posted to sybase.com in October of 2009, Glenn talks about how one can simulate the behaviour of the RowGenerator table and the sa_rowgenerator(…) function using standard SQL.

After posting my recent article on the use of the RowGenerator system table, I received a welcome email from Jan-Eike Michels of IBM who, like me, sits on the DM32.2 committee for INCITSas the IBM representative for the SQL Standard:

Just stumbled across your blog about the RowGenerator (http://scn.sap.com/community/sql-anywhere/blog/2014/06/25/using-rowgenerator) . I don’t know whether iAnywhere supports the WITH clause but (since the standard does) you could use that one as well (similar to your sa_rowgenerator procedure):

I welcomed Jan-Eike’s contribution because, as he quite rightly points out, it is straightforward to generate a set of identifiers recursively using the SQL standard’s common table expression syntax, in this case using the recursive UNION construction.

One can use Jan-Eike’s example almost verbatim in SQL Anywhere. The issues with Jan-Eike’s SQL query are:

So here is a version of Jan-Eike’s example that generates the values between 1 and 10 in SQL Anywhere:

that defines the common table expression “foo” (instead of “dummy”) and generates the specified values. The graphical plan for this query is as follows: 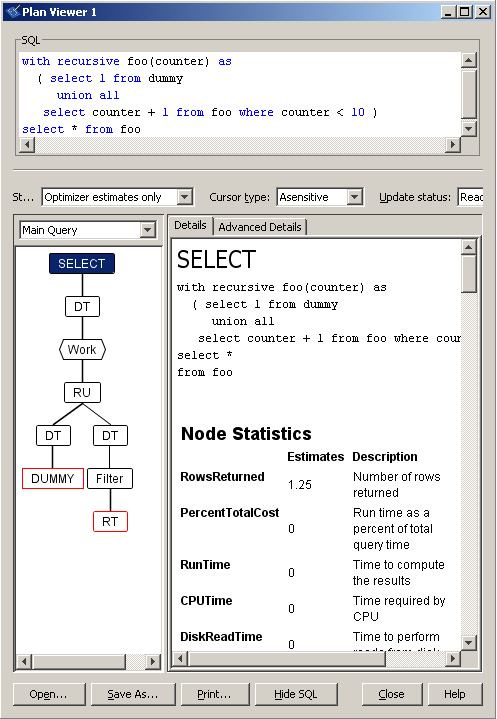 Some points to mention: