SAP Gateway 2.0 SP09 has been released on July 16, 2014 together with SAPUI5 (release 1.22 which is required for Unified Inbox). In this whitepaper we want to provide an overview about the most important new features that have been delivered with SP9. In addition this page will serve as a landing page to SCN content that will be published around these new features. A complete and more detailed list of features that are new can be found in the SAP Online Help: What’s New in SAP NetWeaver Gateway 2.0 SPS 09 – SAP NetWeaver Gateway – SAP Library .

Please note that the features shipped with SAP Gateway 2.0 SP9 are not available in SAP NetWeaver 7.40 yet.

According to SAP note http://service.sap.com/sap/support/notes/1942072 SPS9 is equivalent to SP08 for SAP_GWFND.

SAP Gateway now supports the HTTP header field if-modified-since. As described in the HTTP/1.1: Header Field Definitions (section 14.25) the if-modified-since HTTP header field can be used by the client to signal the server only to return data if the same has been modified since the date and time specified by the If-Modified-Since header. If the data has not been modified the server will not return any data but a HTTP 304 (not modified) response without any message-body.

ETags are used to allow for updates when using cached information. By using ETags it is possible to implement an optimistic locking where a client doesn’t really lock the data but performs a quick check before performing an update to avoid an update of the wrong version of an entity.

So far the framework of SAP Gateway supported a generic handling of ETags. For this a property of an entity type only has to be marked as an ETag. This however required always an additional roundtrip to the backend because the framework automatically performs a GET request to check whether the data has been updated meanwhile. Now the ETag handling can be performed in the backend in an optimized way in the update procedure.

Though it sounds like a contradiction to the REST principles we have added the option to achieve a “stateful” behavior of OData services published via SAP Gateway. To be exact it is not a stateful behavior in the strict sense but more a server side caching. This feature that is called Softstate has been added to SAP Gateway because it allows for a significant gain of performance for certain scenarios.

As stated in our Online documentation “by using soft state, the resources/functionality which has been loaded during the initial load can be reused for the subsequent requests of the service. Thus, the main benefit of soft state is a considerable performance optimization of an OData service”.

One of the use cases that could be addressed with this feature are shopping baskets in SRM scenarios that contains price information that requires complex calculations in the backend.

Based on the Soft State it is also possible to use the new Soft State Based Query Result Cache feature. This feature allows to cache data on the Gatway Hub so that the consumer application can use paging wihtout the requirement to read the data from the backend.

These advantages come however with a price tag since they require additional memory on the SAP Gateway server!

So you have always to make sure when using Soft State Based Query Result Cache (SQRC) that appropriate filters are used that minimize that data that is cached on the Gateway server. In case of emergency the memory consumption can be reduced by the administraor by simply deactivating the SQRC.

The extensibility of OData service is frequently used for SAP Fiori applications as described in SAP Note 1919388 – How to extend OData services in Service Builder. So far it was necessary to create a new service with a new URL. Here the developer creates a new project in the Service Builder where a new service is generated based on the original service by using Redefinition.

As of SP9 you can now register a new service in the backend such that it extends an existing service. As described in the SAP Online Documentation OData requests for the original, extended service will then be processed by the new, extending service. So while the endpoint (URL) remains the same the original service is replaced with another service extending it. As a result the URL that is used by the consuming (Fiori) application does not have to be changed.

The support of search helps that has been introduced with SP8 has been further enhanced. In addition to the mapping proposals that eased the process of creating the mapping to the data source SEGW now also generates the appropriate coding for both read operations (GET_ENTITYSET and GET_ENTITY).

You can now create substitution rules to manage your substitutes, add attachments to a task and view the details of a task and forward one or more tasks to other users for completion.

With SP9 we added the possibility to navigate from alerts in the Gateway CCMS Monitors to the corresponding Error Log entry. This is possible since the alerts issued on the hub have a direct connection to the Error-Log entry via the transaction-id. An alert appears when the first alert is created by an agent but it is also possible to make those monitoring trees visible immediately by starting an appropriate report.

I'll be looking forward to trying out some of these new features, especially Etags as they don't seem to work as expected at the moment.

Softstate should help with some of those "awkward" performance moments if used diligently on non-HANA backends.

And some extended support for us workflow enthusiasts!

I asked our BASIS team to upgrade but it doesn't appear that it is really available yet on the SMP for download. We are using SAP_GWFND 7.40 and based on this note http://service.sap.com/sap/support/notes/1942072 SPS9 is equivalent to SP08 for SAP_GWFND, but when we look for it we only see up to SP07. 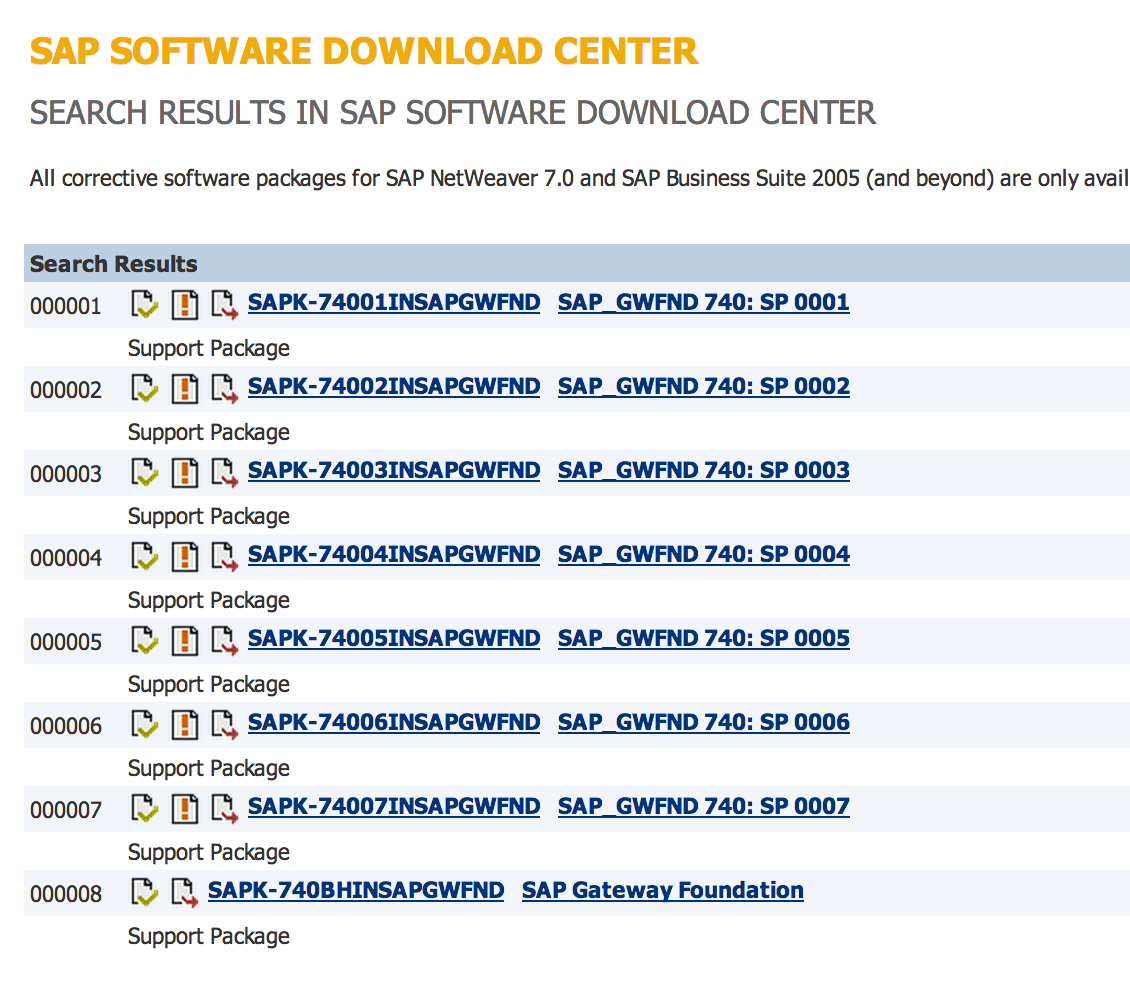 Is it "coming soon to a download centre near me" 😀 or am I just missing something.

So "coming soon to a download centre near me" is perfect description.

Thanks Andre, do you have any idea when? We really want to evaluate ASAP.

the current planning is that the next SP for SAP NetWeaver 7.40 will be shipped in Q4/2014. As always this information comes together with a disclaimer.

If you have to evaluate the new features ASAP you would unfortunately have to setup a system based on 7.31.

That's a bit disappointing to be honest and leaves a bit of a functionality gap between 7.31 and 7.40 systems. Is it not possible to just upgrade the SAP_GWFND component on the 7.40 system without having to upgrade all the other 7.40 Software Components, or are they too interdepenant?

I agree too. As a customer having latest NW system (740), I would expect new features to be released to the latest NW version, and then ported back.

this is exactly what we are doing. 🙂

As a result in the future the newest Gateway features will first be available with SAP NW 7.40.

it is indeed possible to upgrade the component SAP_GWFND independently from the underlying 7.40 netweaver stack since our component only requires 7.40 SP2 as its basis.

I our case we are most interested in the Unified Inbox updates which appear to be part of the SAP_IWPGW component anyway so perhaps we don't have to wait in this case (fingers crossed).

unfortunately I have to tell you that you will have to wait. 🙁

SP6 of IW_PGW requires SP08 of SAP_GWFND (or to SP09 of IW_BEP) according to our Support Package Stack definition: http://service.sap.com/sap/support/notes/1942072 .

unfortunately OData V4 is not supported yet.

However certain features that are part of OData v4 are already part of SAP Gateway now such as Delta Query support.

which of the features of OData V4 are you most interested in?

haven't digested the entire v4 specification, but top off my head in no particular order:

I am fully aware that there are already plenty of possibilities with the current OData v2+ implementation in GW, making it such a swiss knife for in/out data exposure. But seemingly simple things such as the control of metadata output (without using $select) would make it even better 😉

Regarding Performance improvements in SP09 feature

Though if-modified-since value is greater then the last-modified value, still the status is 200 and not changing to 304.

Can you please help on understanding this.

There is no out of the box support for this feature.

Can you please tell if we need to modify the substitution rules and customize it in unified inbox, how to proceed with that?

You can custom build Unified Inbox on the same lines by using Inbox control from SAP UI5 library. In the custom built application you can customize as per your requirements.